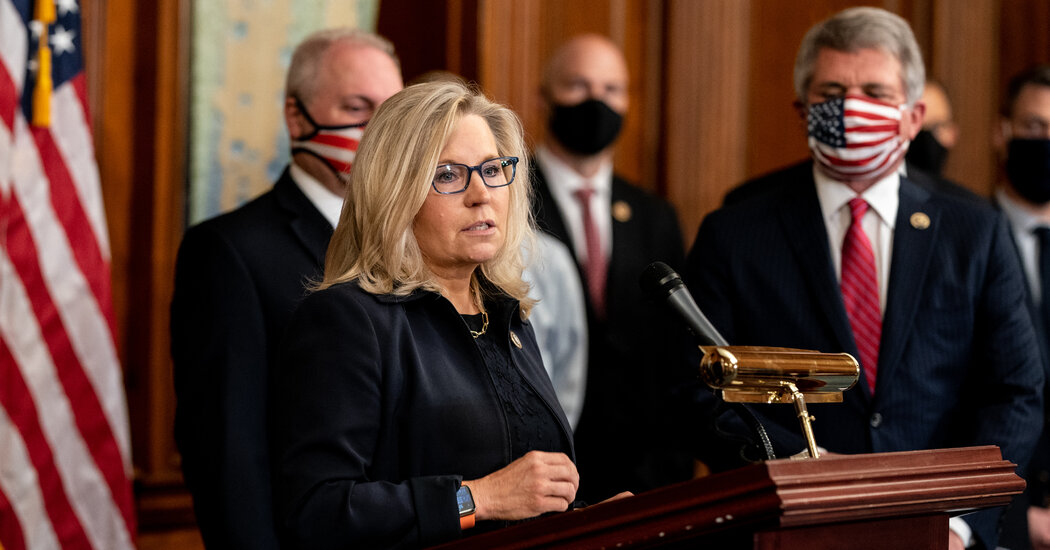 A group of President Trump’s most strident allies in the House is calling on Representative Liz Cheney of Wyoming, the No. 3 Republican, to resign from her leadership post after she voted to impeach Mr. Trump, dramatizing the bitter rifts within the party and setting up a messy internal feud that could define its future.

Members of the ultraconservative Freedom Caucus, including the chairman, Representative Andy Biggs of Arizona, as well as Representatives Jim Jordan of Ohio and Matt Gaetz of Florida, are circulating a petition calling on Ms. Cheney to step down from her role as chairwoman of the House Republican Conference, arguing that her vote to impeach Mr. Trump had “brought the conference into disrepute and produced discord.”

Ms. Cheney was one of 10 Republicans to break with the party on Wednesday and vote to charge the president with “incitement of insurrection” for his role in urging on a mob that stormed the Capitol.

“One of those 10 cannot be our leader,” Mr. Gaetz said in an interview on Fox News’s “Hannity” on Wednesday evening. “It is untenable, unsustainable, and we need to make a leadership change.”

Ms. Cheney has brushed aside calls to step down, saying that she was “not going anywhere” and calling her break with Mr. Trump “a vote of conscience.” Several Republicans, including some members of the Freedom Caucus, have begun to circle the wagons around her.

Others in the party who have been critics of the president have also rushed to her defense.

“Liz has more support now than she did two days ago,” said Representative Adam Kinzinger of Illinois, who also voted to impeach Mr. Trump. “She has gained immeasurable respect.”

Mr. Kinzinger suggested that it was Republicans like Mr. Jordan who should be shoved aside in the wake of the siege and the impeachment it prompted.

“Since the discussion is opened, though, we may have to also have a discussion about who in our party fomented this, and their roles as ranking members,” he said.

The debate over Ms. Cheney’s leadership post reflects the deep fractures in the Republican Party over Mr. Trump, who has demanded total loyalty from his party and, up until recently, largely received it.

While prominent figures have recoiled from Mr. Trump’s incendiary brand of politics in the aftermath of the Jan. 6 riot, worrying that it could spell ruin for their party, a large minority faction — many of them in the House — remains unwilling to abandon him. Republicans are scrambling to determine the political consequences of doing so, and whether they would pay a steeper political price for breaking with the president or for failing to.

Senate Republicans are facing just such a dilemma as they contemplate how to vote in an impeachment trial that could start as early as next week.

Both Representatives Kevin McCarthy of California, the minority leader, and Steve Scalise of Louisiana, the minority whip, voted against impeaching Mr. Trump, though Mr. McCarthy said the president bore responsibility for the siege and deserved a censure.

Ms. Cheney, by contrast, had issued a scathing statement the day before the impeachment vote in which she said: “There has never been a greater betrayal by a president of the United States of his office and his oath to the Constitution.”

But she chose not to speak during debate on the House floor. Many Democrats — who have long reviled her and her father, former Vice President Dick Cheney — quoted her approvingly in their own speeches.