Blog | Alphhainc
Home US California Tries to Speed Up Vaccinations 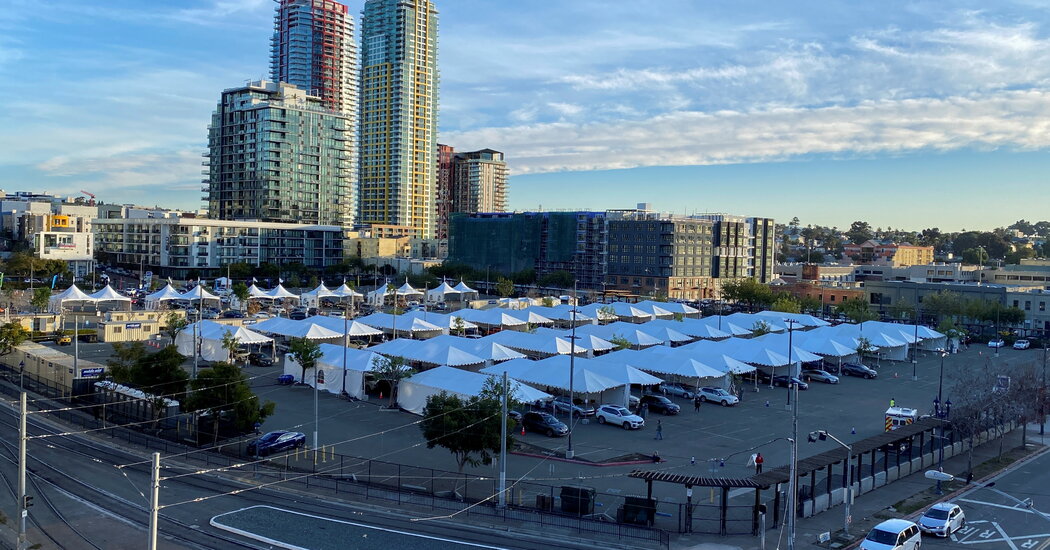 Monday was the start of what is likely to be yet another difficult week, as state officials sought to speed up vaccinations amid a continuing tsunami of Covid-19 cases and hospitalizations — even if there were faint signs that numbers could be flattening.

The state has loosened what leaders have described for weeks as a carefully drafted, strict vaccine prioritization and is moving into what Gov. Gavin Newsom called an “all-hands-on-deck approach.”

That includes transforming Dodger Stadium from one of the nation’s biggest and most visible coronavirus testing sites into a mass vaccination center; the San Diego Padres’ stadium and the state fairgrounds in Sacramento were also being set up as vaccination sites, the governor said.

[Track coronavirus cases and hospitalizations across California with The Times’s map.]

Mr. Newsom said that as of Sunday, the state had received almost 2.5 million doses of the vaccines, and that 783,476 had been administered.

The state’s vaccine plan laid out phases and tiers to ensure that millions of health care workers and people living in nursing homes — the top priority groups — would be vaccinated first, followed by vulnerable groups, including those 75 and older, and teachers.

But as The Los Angeles Times recently reported, surprisingly large numbers of health care workers in Los Angeles and Riverside Counties were declining to be inoculated. And relatively few people in the state have gotten vaccine doses, compared with other states and territories, according to a New York Times tracker.

[If you missed it, read about Helen Cordova, the first person to get a vaccine in California.]

Dr. Mark Ghaly, California’s secretary of health and human services, said in the Monday news conference that the state was working with counties and other local public health leaders to distribute vaccines to those who both need them and want them — without allowing wealthy people to cut the line.

“We don’t want people to be able to sell doses or profit off of it,” he said, “but we need to make sure we use what we have in our freezers.”

Mr. Newsom said the state had allowed a broader range of workers to administer vaccines, including pharmacists and dentists, and was rolling out a public awareness campaign in 18 languages.

“People have said, ‘Well, what about sending in the National Guard?’” he said. “Well, we have the National Guard out there,” administering vaccines. Mr. Newsom also said that there were urgent efforts to “vaccinate the vaccinators.”

While public health leaders in California said on Monday there were signs that the surge may be plateauing, they also cautioned that the state was far from out of the woods.

[Read about why it’s been so difficult to staff California’s hospitals.]

Over the last seven days, 476 people in California have died of Covid-19 on average, according to the governor. Intensive care units in Southern California and the San Joaquin Valley are still full, Mr. Newsom said, and in the Bay Area, a stay-at-home order was likely to be extended, because of low intensive care unit capacity in the region. As of Monday, available capacity was down to just 0.7 percent.

Mr. Newsom said that in the next week, 1,000 more contract health care workers were set to help California’s exhausted doctors, nurses and more.

According to the zoo, the gorillas may have been infected by an asymptomatic staff member, and are now quarantining. Aside from “some congestion and coughing,” both are doing well, Lisa Peterson, the executive director of the San Diego Zoo Safari Park, said in a statement. [The New York Times]

(This article is part of the California Today newsletter. Sign up to get it delivered to your inbox.)

Fallout from the storming of the Capitol

Although Washington, D.C., is thousands of miles from the West Coast, fallout from the storming of the Capitol by a mob of Trump loyalists has continued to ripple through the Golden State.

There is the impeachment charge against the president for “inciting violence against the Government of the United States,” which was introduced on Monday by House Democrats, led by Speaker Nancy Pelosi, of San Francisco.

California lawmakers who were at the Capitol have in recent days shared chilling accounts of the siege.

And local officials from across the state are facing calls to resign after they either went to Washington themselves or posted support for the riot.

[Times reporters are tracking and debunking viral misinformation every day.]

But there have also been violent incidents and threats of violence here in California.

As The Los Angeles Times reported, a day before the Capitol riot, a newly elected Shasta County supervisor let a crowd of Trump supporters into the board’s chambers during a meeting that had been scheduled to take place virtually. They proceeded to threaten the supervisors watching.

“When Joe Biden’s long winter sets and the dark night comes in this country, do you think you’re going to get to see the dawn?” one asked them. “No, you will not.”

Last week, a Black woman was attacked by Trump supporters gathered in Downtown Los Angeles as she walked home. The attack is now being investigated by the police as a hate crime.

“I’m thinking I’m dead right here,” she later told The Los Angeles Times. “These people are trying to kill me.”

And on Monday, the governor said California was among the states bracing for violence in coming days.

The National Guard would be deployed as needed, he said, and the California Highway Patrol, responsible for protecting the Capitol, was also on the lookout for any budding violence.

“I can assure you we have a heightened, heightened level of security,” Mr. Newsom said.

If you missed it, read more about why he left the party in 2019. [The New York Times]

California Today goes live at 6:30 a.m. Pacific time weekdays. Tell us what you want to see: CAtoday@nytimes.com. Were you forwarded this email? Sign up for California Today here and read every edition online here.

Jill Cowan grew up in Orange County, graduated from U.C. Berkeley and has reported all over the state, including the Bay Area, Bakersfield and Los Angeles — but she always wants to see more. Follow along here or on Twitter.

California Today is edited by Julie Bloom, who grew up in Los Angeles and graduated from U.C. Berkeley.