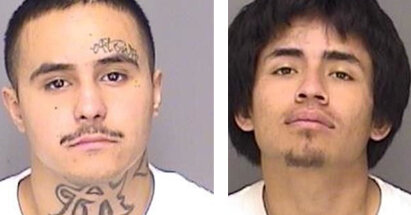 Six men escaped from a jail in Merced County, Calif., using a rope of braided bedsheets, setting off a manhunt throughout the region, the authorities said on Sunday.

The jail’s staff members noticed the men, who range in age from 19 to 22, were missing on Sunday morning, and an initial investigation found that they had escaped shortly before midnight, Sheriff Vern Warnke said in a news conference on Sunday.

He said that a task force had been formed to track down the fugitives, whom the Sheriff’s Office said should be considered armed and dangerous. The office said that several of the men were in jail because they had been charged with violent crimes.

The six men were housed together in a nine-person cell in the jail’s gang housing unit. They were last seen on video surveillance around 11:30 p.m., Sheriff Warnke said.

Shortly after, the men gained access to the jail’s roof and used a rope fashioned out of braided bedsheets to scale a wall, landing about 20 feet down in an alley between the jail and another building.

Sheriff Warnke said his office had information about where the men may be headed, but he did not believe they would all stick together.

More than 30 investigators are searching for the men in the county and surrounding areas, he said, and law enforcement officers “on both ends of the state” have been alerted to look for the fugitives.

“I would probably think that they’re trying to get out of the area as fast as they can,” Sheriff Warnke said.

He said that anyone who sees the men should not approach them, but instead call 911.

“Do not take this into your own hands,” he said. “No sense anybody getting hurt.”

Jail employees noticed the men were missing during a head count at about 8:30 a.m. on Sunday, Sheriff Warnke said. He explained that court rulings prevent jail staff from interrupting inmates’ sleep, but that employees do patrol the halls at night.

“I’m not very happy about the timeline,” he said. “We are doing an investigation and people will be held accountable, if warranted.”

Sheriff Warnke also said that there were challenges with the facility itself, including staffing shortages because of budget cuts dating as far back as 2009.

“This jail is very antiquated,” he said. “This jail was not meant to house the type of inmate that we have now.”

Sheriff Warnke said he remembered only a few other escape attempts over his 40 years working at the Sheriff’s Office. In one instance, an inmate was able to sneak out in a laundry basket, he said. In another, in the 1980s, inmates tried to flee through a broken window but were caught before they could escape.