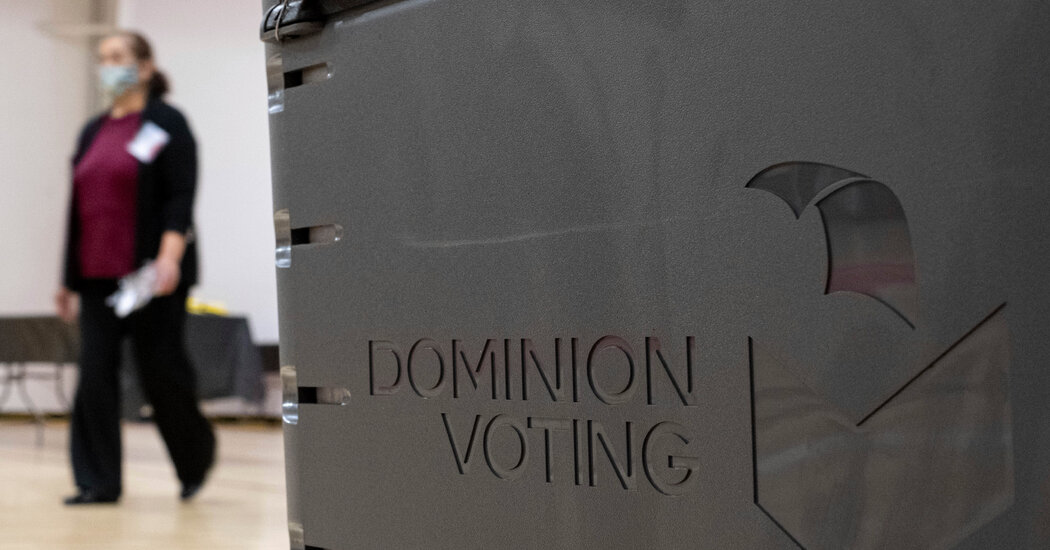 Dominion Voting Systems filed a sprawling slander and libel lawsuit on Friday against the right-wing lawyer Sidney Powell, accusing her of overseeing “a viral disinformation campaign” that fed lies about the presidential election to millions of people and endangered the lives of the company’s employees and elected officials in states like Georgia.

The suit, filed in Federal District Court in Washington D.C., seeks damages from Ms. Powell of more than $1 billion and represents the most thorough debunking to date of the elaborate conspiracy theories that she and others, including President Trump, have been spreading since Election Day about Dominion’s voting machines.

At news conferences, political rallies and on conservative media outlets like Newsmax and Fox News, Ms. Powell has for months falsely accused Dominion of working with a bizarre cast of characters — from the financier George Soros to Venezuelan intelligence agents — in what she has baselessly described as a plot to flip votes from Mr. Trump to President-elect Joseph R. Biden Jr.

The wild allegations have been contained in four federal lawsuits Ms. Powell filed across the country, all of which have been roundly dismissed by the judges that heard them.

In a cease-and-desist letter sent last month, Dominion put Ms. Powell on notice that a lawsuit might be coming and demanded that she publicly disavow her false claims that the company’s voting machines were created in Venezuela to help the country’s now-deceased former president, Hugo Chavez, win elections.

Dominion also demanded she retract her baseless statements that Dominion paid kickbacks to officials in Georgia for “no-bid contracts” and then manipulated votes in “an effort to rig the 2020 election.”

But after receiving the letter, Ms. Powell did not retract her claims. Instead, the lawsuit notes, she “doubled down” sending a tweet to her more than 1 million followers that she had “evidence” that fraud occurred in the election even after four judges and various states’ elections officials have repeatedly debunked it.

What she called evidence, the suit said, included “declarations from a motley crew of conspiracy theorists, con artists, armchair ‘experts,’ and anonymous sources who were judicially determined to be ‘wholly unreliable.’”

“The recent attacks on the democratic process are not singular or isolated events,” John Poulus, Dominion’s chief executive, said in a statement after the suit was filed. “They are the result of a deliberate and malicious campaign of lies over many months. Sidney Powell and others created and disseminated these lies, assisted and amplified by a range of media platforms.”

Ms. Powell did not immediately respond to requests for comment.

Dominion has suggested that it may sue others as well. Last month, the company sent a series of letters to people including Rudolph W. Giuliani, who led Mr. Trump’s postelection legal campaign, and conservative media figures such as Lou Dobbs and Sean Hannity, demanding that they keep any evidence relevant to a suit. Company representatives have also said Dominion has not ruled out suing Mr. Trump as well.

Not long after the election, Mr. Trump embraced Ms. Powell, a former federal prosecutor who had represented his onetime national security adviser Michael T. Flynn in a criminal case stemming from the Russia investigation. However, after she appeared with Mr. Giuliani at a bizarre news conference in November where she spouted her conspiracies about Dominion, Mr. Trump distanced himself from her and she was left to file lawsuits on her own.

But after Mr. Trump and his allies lost dozens of their own lawsuits challenging the election, Mr. Trump changed course and brought Ms. Powell back into his inner circle — at one point, discussing the possibility of naming her as a special counsel to investigate voter fraud.