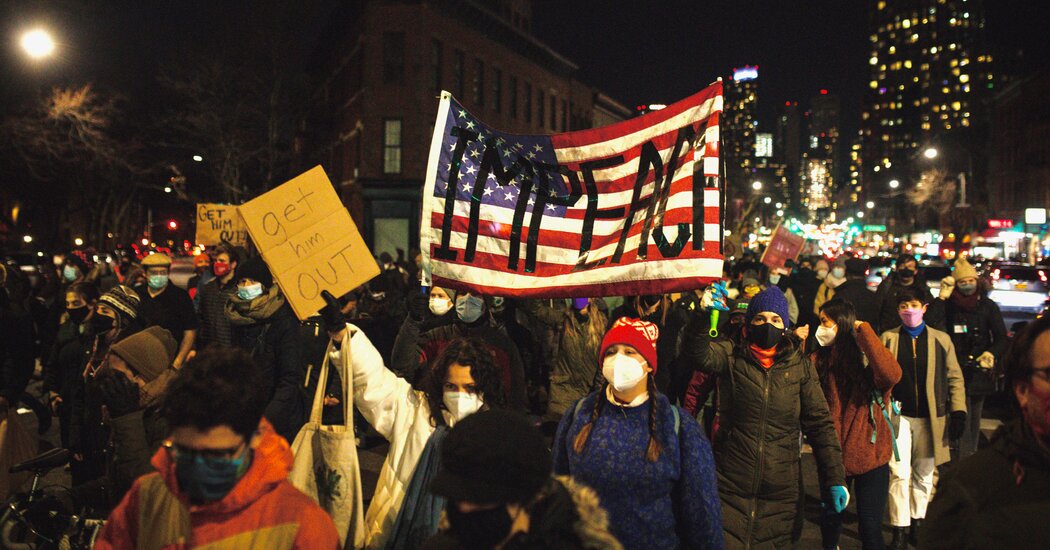 A crowd of several thousand anti-Trump protesters gathered at Barclays Center in Brooklyn on Thursday evening, and then filled Flatbush Avenue for a peaceful march to the Prospect Park West home of Senator Chuck Schumer, Democrat of New York.

As the group made its way to Mr. Schumer’s building, demonstrators chanted “No Trump, no K.K.K., no fascist U.S.A.,” accompanied by the rhythms of drummers and percussionists.

Several people in the crowd said that they had been moved to venture into the chilly night after watching Mr. Trump’s supporters storm the United States Capitol building on Wednesday in Washington.

“What we saw was incredibly frustrating and tragic, and a lot of people are looking for direction,” said Nina Svirsky, a teacher from Brooklyn.

Dozens of masked, uniformed police officers monitored the rally; no arrests were reported. After most of the crowd had melted away, the talk among some of those left turned specifically to the stark racial disparities in crowd control and enforcement that were on display Wednesday.

“If it was us, we really would have got beat up, so we’re upset at that,” said Alfred Martinez, 39, a Black man who said he had come from the Bronx.

In Manhattan, a much smaller group gathered in Times Square, where members of Refuse Fascism, an activist organization, unfurled a banner with the hashtag “#OutNow!” and called for the removal from office of President Trump and Vice President Mike Pence.

“We are out here today because what we saw yesterday was an attempted coup,” one of the protest’s organizers, Jennifer Sabel, said through a loudspeaker.

Noting the crowd’s modest size, Ms. Sabel urged those who were there to return on Saturday and to bring others with them for what she said she hoped would be a national day of protest. The demonstration ended after about an hour.

Emma Kaplan, another Refuse Fascism organizer, said that she and her compatriots did not feel as though they could just bide their time until President-elect Joseph R. Biden Jr. succeeds Mr. Trump later this month.

“The next 13 days, what we do now, is going to determine the future,” Ms. Kaplan said. “We have to be out and not hope that this is going to resolve itself because yesterday actually showed where that leads.”