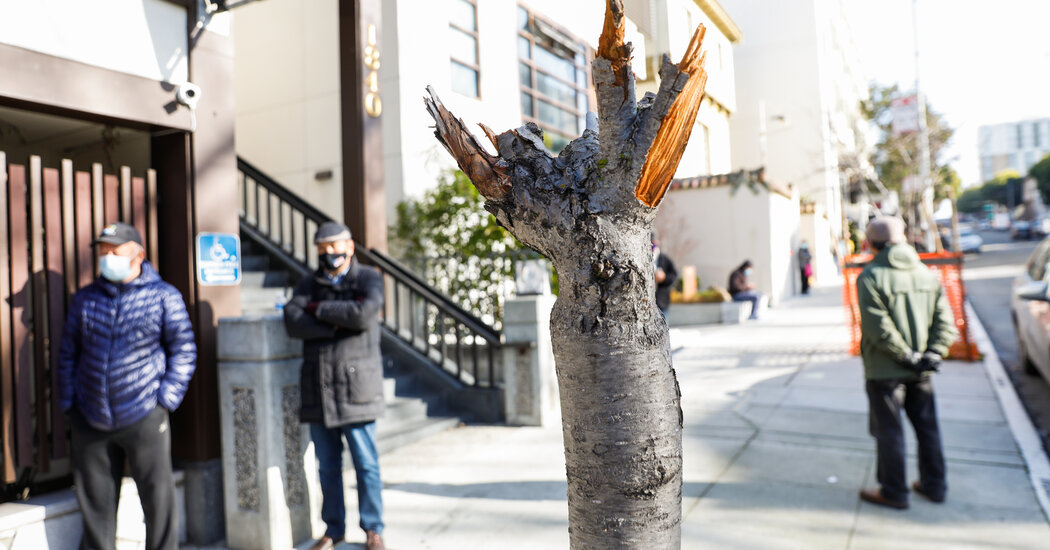 Cherry blossoms have a symbolic significance in Japanese culture, in which they are often understood to represent life and death, said James Zarsadiaz, a University of San Francisco professor whose research includes urban and suburban studies as well as Asian-American history.

The blossoming of the trees conjures thoughts of new beginnings and hope — both of which the city’s Japanese community has been clinging to at the start of the new year, Mr. Osaki said.

San Francisco’s Japantown, also known as Nihonmachi, is an ethnic enclave created in the early 1900s after the Great Earthquake of 1906, when Japanese residents moved to the Western Addition section of the city.

Over the years the neighborhood has undergone numerous transformations, as Japanese residents were sent to internment camps established during World War II and the so-called urban renewal of the late 1940s displaced residents and local businesses, according to the Advisory Council on Historic Preservation.

San Francisco has a diverse Asian population, with Asian-American residents accounting for over 30 percent of its total population. Its Japantown is one of the few left in the United States, with others in San Jose, Los Angeles and Seattle, Professor Zarsadiaz said.

Although not native to the United States, Japanese cherry blossoms can be found throughout the country and also have come to symbolize peace in U.S.-Japanese diplomatic relations.

In 1912, Japan gave the United States some 3,000 cherry blossom trees, which were planted in Washington, and in 1965, the Japanese government gave almost 4,000 cherry blossoms to Lady Bird Johnson, then the first lady. Some, but not all, of the original trees from 1912 remain today as new ones have been planted over the years.