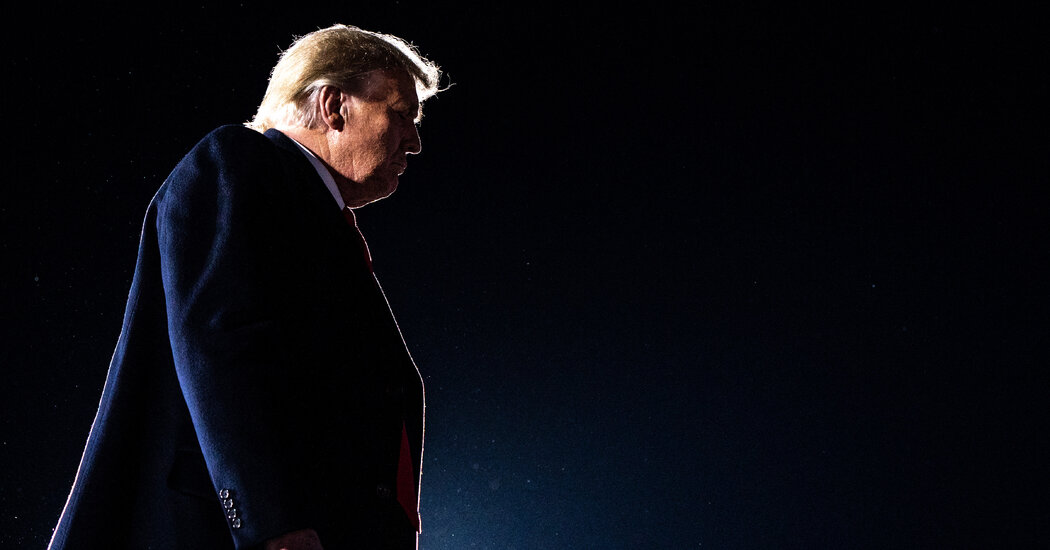 President Trump has suggested to aides he wants to pardon himself in the final days of his presidency, according to two people with knowledge of the discussions, a move that would mark one of the most extraordinary and untested uses of presidential power in American history.

In several conversations since Election Day, Mr. Trump has told advisers that he is considering giving himself a pardon and, in other instances, asked whether he should and what the effect would be on him legally and politically, according to the two people. It was not clear whether he had broached the topic since he incited his supporters on Wednesday to march on the Capitol, where some stormed the building in a mob attack.

Mr. Trump has shown signs that his level of interest in pardoning himself goes beyond idle musings. He has long maintained he has the power to pardon himself, and his polling of aides’ views is typically a sign that he is preparing to follow through on his aims. He has also become increasingly convinced that his perceived enemies will use the levers of law enforcement to target him after he leaves office.

No president has pardoned himself, so the legitimacy of prospective self-clemency has never been tested in the justice system, and legal scholars are divided about whether the courts would recognize it. But they agree a presidential self-pardon could create a dangerous new precedent for presidents to unilaterally declare they are above the law and to insulate themselves from being held accountable for any crimes they committed in office.

A White House spokesman did not respond to a request for comment.

Mr. Trump has considered a range of pre-emptive pardons for family, including his three oldest children — Donald Trump Jr., Eric Trump and Ivanka Trump — for Ms. Trump’s husband, the senior White House adviser Jared Kushner, and for close associates like the president’s personal lawyer Rudolph W. Giuliani. The president has expressed concerns to advisers that a Biden Justice Department might investigate all of them.

Mr. Trump, who has told advisers how much he likes having the power to issue clemency, has for weeks solicited aides and allies for suggestions on whom to pardon. He has also offered pre-emptive pardons to advisers and administration officials. Many were taken aback because they did not believe they were in legal jeopardy and thought that accepting his offer would be seen as an admission of guilt, according to the two people.

Presidential pardons apply only to federal law and provide no protection against state crimes. They would not apply to charges that could be brought by prosecutors in Manhattan investigating the Trump Organization’s finances.

The discussions between Mr. Trump and his aides about a self-pardon came before his pressure over the weekend on Georgia officials to help him try to overturn the election results or his incitement of the riots at the Capitol. Trump allies believe that both episodes increased Mr. Trump’s criminal exposure.

As aides urged Mr. Trump to issue a strong condemnation on Wednesday and he rejected that advice, the White House counsel, Pat A. Cipollone, warned Mr. Trump that he could face legal exposure for the riot given that he had urged his supporters to march to the Capitol and “fight” beforehand, according to people briefed on the discussion. The president had appeared to White House aides to be enjoying watching the scenes play out on television.

Beyond that, the extent of Mr. Trump’s criminal exposure is unclear. The special counsel, Robert S. Mueller III, outlined 10 instances in which Mr. Trump may have obstructed justice but declined to say whether he broke the law, citing legal and factual constraints of prosecuting a sitting president. Former Justice Department officials and legal experts said that several of the acts should be prosecuted.

In 2018, federal prosecutors in New York named Mr. Trump as a conspirator in an illegal campaign finance scheme.

Pardons can be broad or narrowly tailored. White-collar defense lawyers said that Mr. Trump would be best served by citing specific crimes if he pardoned himself, but such details could be politically damaging by suggesting that he was acknowledging he had committed those crimes.

“The Biden Justice Department will not want to acquiesce in a Trump self-pardon, which implies that the president is literally above federal law,” said Jack Goldsmith, a Harvard law professor and former top Justice Department official in the George W. Bush administration.

A self-pardon would align with Mr. Trump’s unprecedented use of the pardon power. The framers of the Constitution gave the president almost total authority to grant clemency for federal crimes, positioning the head of the executive branch as a check on the judicial branch and as someone who could dip into the justice system to show grace and mercy on the downtrodden.

But Mr. Trump has eschewed the formal Justice Department process set up to ensure pardons are handed out fairly. Instead, he has used his pardon power unlike any other president to help allies, undermine rivals and push his own political agenda. Of the 94 pardons and commutations Mr. Trump has granted, 89 percent were issued to people who had a personal tie to Mr. Trump, helped him politically or whose case resonated with him, according to a tabulation by Mr. Goldsmith.

The only president to receive a pardon was Richard M. Nixon. A month after Nixon left office, his former vice president, President Gerald R. Ford, pardoned him for all crimes he committed in office. The move was widely criticized at the time as allowing the presidency to hover above the law. Ford supporters later blamed the pardon for his election loss two years later, though ultimately the pardon came to be seen as a move that helped the country move on from Watergate.

Mr. Trump has maintained throughout his presidency that he has the authority to pardon himself and first discussed the possibility with aides as early as his first year in office. Those discussions began when his campaign’s ties to Russia were being scrutinized and investigators were examining whether he had obstructed justice.

Legal scholars are less certain about Mr. Trump’s declaration that he has an “absolute right” to pardon himself.

The Justice Department said in a short August 1974 opinion, just four days before Mr. Nixon resigned, that “it would seem” that presidents cannot pardon themselves “under the fundamental rule that no one may be a judge in his own case.”

“Only a court can invalidate a self-pardon, and it can only do so if the Biden administration brings a case against Trump,” Mr. Goldsmith said. “A Trump self-pardon would thus make it more likely the Biden team prosecutes Trump for crimes committed in office.”

Throughout Mr. Trump’s presidency, he and allies have looked to pardons as a way of helping the president protect himself in criminal investigations. During the Russia investigation, Mr. Trump and his personal lawyer John M. Dowd dangled pardons to former aides. One, his former campaign chairman Paul Manafort, flouted a plea deal to work with prosecutors.