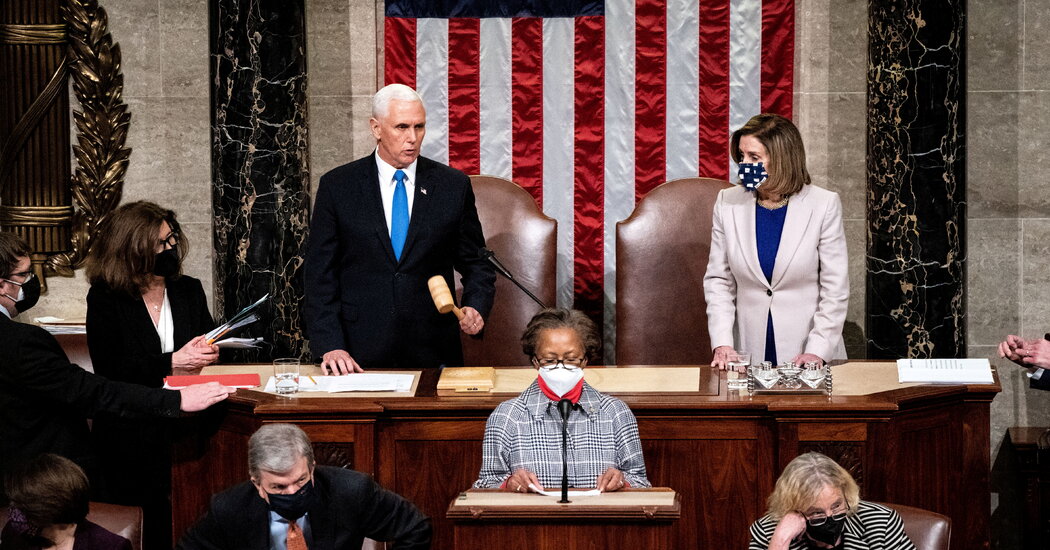 Congress certified the election of President-elect Joseph R. Biden Jr. early Thursday, hours after loyalists urged on by President Trump stormed and occupied the Capitol, disrupting the final electoral count in a shocking display of violence that shook the core of American democracy.

Mr. Trump, who spent months stoking the anger of his supporters with false claims that the election was stolen and who refused to condemn the violent protests on Wednesday, said early Thursday that there would be an orderly presidential transition this month.

“Even though I totally disagree with the outcome of the election, and the facts bear me out, nevertheless there will be an orderly transition on January 20th,” he said in a statement.

The statement, which had to be issued through surrogates since Mr. Trump’s Twitter account was suspended, came moments after Vice President Mike Pence affirmed Mr. Biden as the winner of the presidential election shortly before 4 a.m. after the final electoral votes were tallied in a joint session of Congress.

There was no parallel in modern American history, with insurgents acting in the president’s name vandalizing Speaker Nancy Pelosi’s office, smashing windows, looting art and briefly taking control of the Senate chamber, where they took turns posing for photographs with fists up on the dais where Mr. Pence had just been presiding.

Mr. Biden, speaking as the scenes of destruction in the halls of Congress left lawmakers from both parties horrified, blamed Mr. Trump for fomenting the insurrection.

“At their best, the words of a president can inspire. At their worst, they can incite,” Mr. Biden said.

Allies around the world, accustomed to the chaos that has marked Mr. Trump’s tenure, struggled to find words to describe what they were witnessing.

“These pictures made me angry and sad,” Chancellor Angela Merkel of Germany said.

In Russia, by contrast, the violence fit neatly into the Kremlin’s narrative of a crumbling American democracy. The Kremlin released no official comment, but state television offered extensive late-night coverage of the attack on the Capitol, with the footage of the violence set to dramatic, orchestral music.

The upheaval unfolded on a day when Democrats secured a stunning pair of victories in runoff elections in Georgia, winning effective control of the Senate and the levers of power in Washington.

The siege at the Capitol was the climax of a weekslong campaign by Mr. Trump, filled with baseless claims of fraud and outright lies, to try to overturn a democratically decided election that he lost.

By the time the Senate reconvened late Wednesday, hours after lawmakers had been evacuated from a Capitol overrun by a mob carrying pro-Trump paraphernalia, one of the nation’s most polarizing moments had yielded an unexpected window of solidarity. Republicans and Democrats locked arms to denounce the violence and express their determination to carry out what they called a constitutionally sacrosanct function.

“To those who wreaked havoc in our Capitol today, you did not win,” Mr. Pence said in a sharp break from Mr. Trump, who had posted messages condoning the mob’s actions. “Violence never wins. Freedom wins. And this is still the people’s house.”

Senator Mitch McConnell, Republican of Kentucky and the majority leader, said the “failed insurrection” had only clarified Congress’s purpose.

“They tried to disrupt our democracy,” he said. “They failed.”

After the vote was certified early Thursday, Barry C. Black, the Senate chaplain, said a prayer in the chamber in an emotional close to a chaotic day in which a woman was fatally shot inside the Capitol.

“These tragedies have reminded us that words matter and that the power of life and death is in the tongue,” he said. “We deplore the desecration of the United States Capitol building, the shedding of innocent blood, the loss of life, and the quagmire of dysfunction that threaten our democracy.”