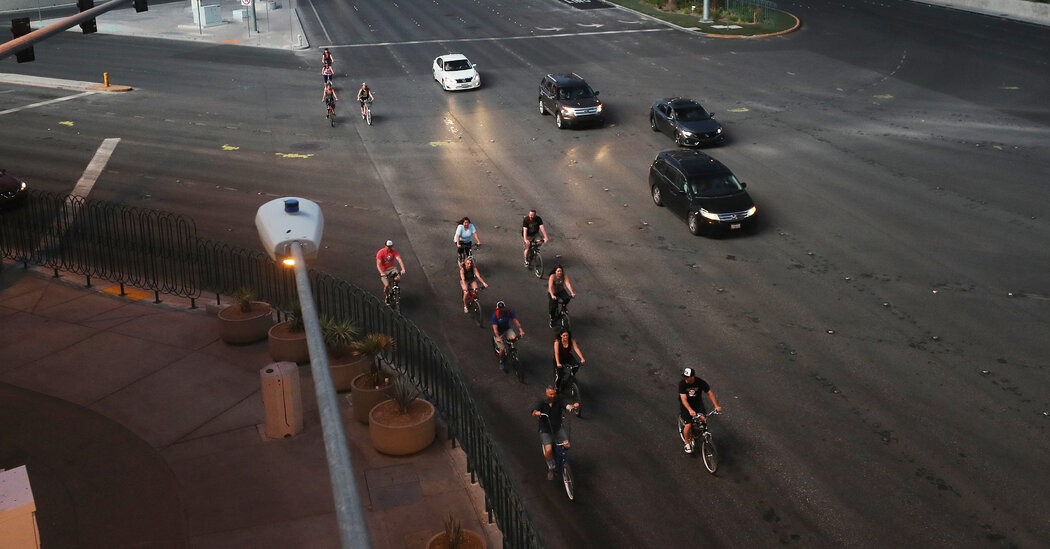 Two years ago, Hutchinson was out for a 4 a.m. solo ride, with flashing lights and reflective gear, when he was struck from behind by a motorist who fled the scene, leaving him with multiple cuts and a broken helmet. For months, he refused to ride alone and flinched as vehicles passed.

In 2015, Las Vegas was rated the nation’s third most-dangerous city for bicyclists, with 6.4 cyclist fatalities per million people, behind only Albuquerque, N.M., and Tucson, Ariz., according to the National Highway Traffic Safety Administration.

In 2019, more than one-quarter of Nevada’s traffic fatalities involved pedestrians and bicyclists. Last year, the number of biking fatalities statewide rose by more than 50 percent, to 11 from seven, including the five killed in December, according to the Nevada Office of Traffic Safety. The remainder died after they were struck from behind by motorists.

Activists have made some headway in enacting laws to protest cyclists.

In 2011, Nevada passed a Vulnerable User Law, better known as the “Three Feet Rule,” requiring motorists to surrender more space — an entire lane, if possible — to cyclists, with penalties that include fines and loss of license.

Two years later, after the pro cyclist Pete Makowski was killed after being struck from behind by a gravel truck while on a rural training ride, activists began a “Three Feet for Pete” campaign in his honor to help publicize the new law.

“There’s a much broader picture here,” said Justin Jones, a commissioner in Clark County, which includes Las Vegas, and an avid cyclist who keeps a Ghost Bike in his office to stress bicycling safety. “It’s not just increasing penalties. Going to jail for longer periods for killing a cyclist isn’t necessarily going to help the next bicyclist on the road. But more education might.”

Heather Fisher, a local bike shop owner and the president of the Save Red Rock preservation group, has called for a statewide campaign similar to the one against using cellular phones while driving.