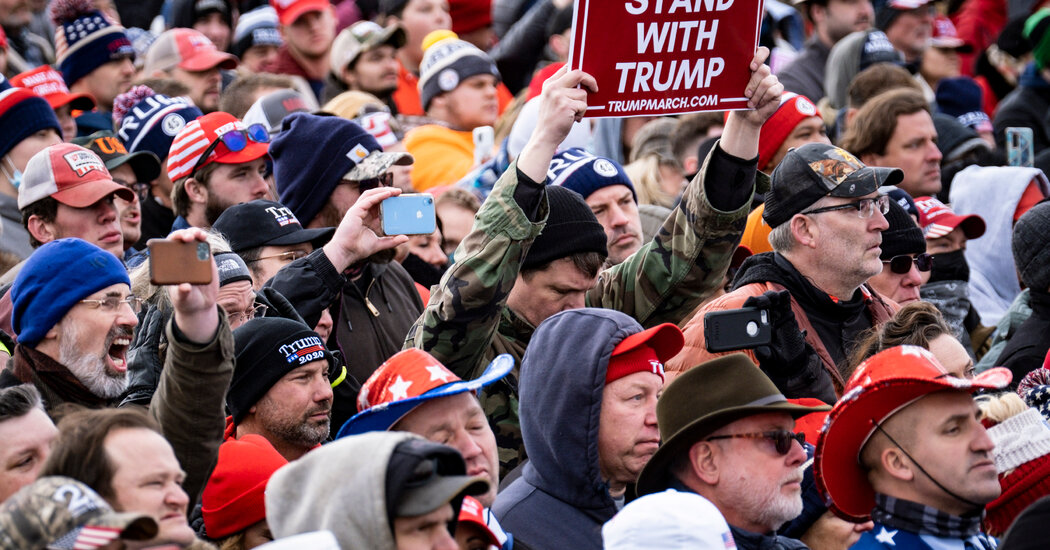 WASHINGTON — After 1,448 days of trench warfare with friends and foes alike, 1,448 days of Twitter blasts and busted norm and shock-jock governing, 1,448 days of dominating the national conversation and rewriting reality to suit his needs, President Trump arrived on Wednesday at a moment of reckoning. All that was left was the shouting.

Barring an unforeseen surprise, Congress was poised to ratify Mr. Trump’s election defeat with bipartisan majorities despite a furious effort to persuade Republicans to block the count. At the same time, Democrats appeared on the cusp of winning the second of two runoff elections in Georgia to seize control of the Senate and complete their takeover of the executive and legislative branches.

The wreckage of the Trump presidency and its collateral damage on the Republican Party were on display at one end of Pennsylvania Avenue while his denialism was on display on the other. As lawmakers headed to the Capitol to receive electoral votes sealing President-elect Joseph R. Biden Jr.’s victory, Mr. Trump was left to rage futilely before supporters gathered on a cold, gusty day on the Ellipse just south of the White House he will have to vacate in 14 days.

“We will never give up,” he declared at the “Save America” rally, his last-gasp effort to justify his failing bid to overturn the democratic election with false claims of fraud that have been debunked by elections, judges and even his own attorney general. “We will never concede. It doesn’t happen. You don’t concede when there’s theft involved. Our country has had enough. We will not take it anymore, and that’s what this is all about.”

The convulsions of the day in Washington presaged the coming conclusion to four turbulent years that upended convention and challenged the institutions of a capital built up over more than two centuries. Democrats and Republicans alike never quite knew how to handle a reality television show star who defied expectation, tradition, rules and truth. Some fought him, others sought to manage him and many in his own party bowed down to him — until now as the toll became clear. But they never fully accepted him.

As the crowd on the Ellipse chanted, “Fight for Trump! Fight for Trump!” the president lashed out at members of his own party for not doing more to help him cling to power over the will of the people. “There are so many weak Republicans,” he growled and then vowed to take revenge against those he deemed insufficiently loyal. “You primary them,” he said.

He singled out Gov. Brian Kemp of Georgia, a Republican who has angered him by not intervening in the election, calling him “one of the dumbest governors in the United States.” And he went after William P. Barr, the attorney general who would not validate his election complaints. “All of a sudden, Bill Barr changed,” he groused.

Other speakers, including his sons Donald Trump Jr. and Eric Trump, excoriated Republican lawmakers for not standing up for Mr. Trump. “The people who did nothing to stop the steal — this gathering should send a message to them,” Donald Jr. said. “This isn’t their Republican Party anymore. This is Donald Trump’s Republican Party.”

To many Republicans, that was the problem. Even as Mr. Trump’s presidency was slipping away from him, Republicans increasingly turned on him, stewing over the lost Georgia races they blamed on his erratic behavior since the Nov. 3 election and the votes he was forcing lawmakers to take for or against the results of a democratic election.

Gabriel Sterling, a senior Georgia election official and longtime Republican who has vigorously refuted the president’s false claims of wrongdoing in his state’s elections, said Mr. Trump was “100 percent, four-square responsible” for the party’s apparent losses there in Tuesday’s Senate runoff elections. Former Senator Jeff Flake of Arizona, one of the president’s sharpest Republican critics, went on CNN to say the election results were “a kind of fitting coda, I think, to the end of the Trump administration.”

The headlines on some conservative media websites were unforgiving:

“Trump and his enablers stole the Georgia elections from Republicans,” declared one column in The Washington Examiner.

“Blame Everything, but Especially Trump,” said another in National Review.

As for Democrats, they were jubilant over the declared victory of the Rev. Raphael Warnock and the possible victory of Jon Ossoff in Georgia, which if finalized would result in a 50-50 Senate with Vice President-elect Kamala D. Harris’s tiebreaking vote giving Democrats a majority. “It feels like a brand-new day,” exulted Senator Chuck Schumer of New York, who was poised to become the majority leader.

Mr. Trump was hardly ready to concede that and was still pressuring Vice President Mike Pence to do what even the president’s longtime lawyer Jay Sekulow said the vice president did not have the power to do — reject the electors of swing states Republicans lost. “I hope Mike is going to do the right thing,” Mr. Trump said. “I hope so. I hope so because if Mike Pence does the right thing, we win the election.”

Just minutes later, Mr. Pence released a letter saying he did not have the power to do what the president wanted him to do. “It is my considered judgment that my oath to support and defend the Constitution constrains me from claiming unilateral authority to determine which electoral votes should be counted and which should not,” Mr. Pence wrote.

It was a city on edge, bracing for possible violence and unrest with downtown businesses boarding up their storefronts and windows. Mr. Trump’s supporters planned to march to the Capitol to protest his defeat, as hundreds of police officers and National Guard troops kept watch. At one point, the president about to lose his office even seemed to suggest he would join them in the trek to Capitol Hill, but instead kept speaking even as Congress convened at 1 p.m. to cement his defeat.

Mr. Trump faced the end of his reign much as he began it, without the support of most Americans even as he has presented himself as a self-proclaimed billionaire champion of everyday people. He won through the Electoral College in 2016 with three million fewer votes in the popular tally than his opponent and lost by seven million in November. He did not earn the approval of a majority of Americans in major surveys for a single day of his tenure, unlike any of his predecessors in the history of polling.

As he confronted the finale of his one-term presidency, Mr. Trump comforted himself in the company of rallygoers, always his favorite venue for affirmation. He rattled off one debunked conspiracy theory after another to explain away his loss. As the hour for the counting in Congress approached, he kept talking almost as if the talking would change the outcome somehow.

“Let’s go back eight weeks,” he said at one point, seeking metaphorically to return to before the loss that will define him at least in part in the history books. But it was too late. None of the yelling would change anything. The show was drawing to a close.