Blog | Alphhainc
Home US Pence Said to Have Told Trump He Lacks Power to Change Election... 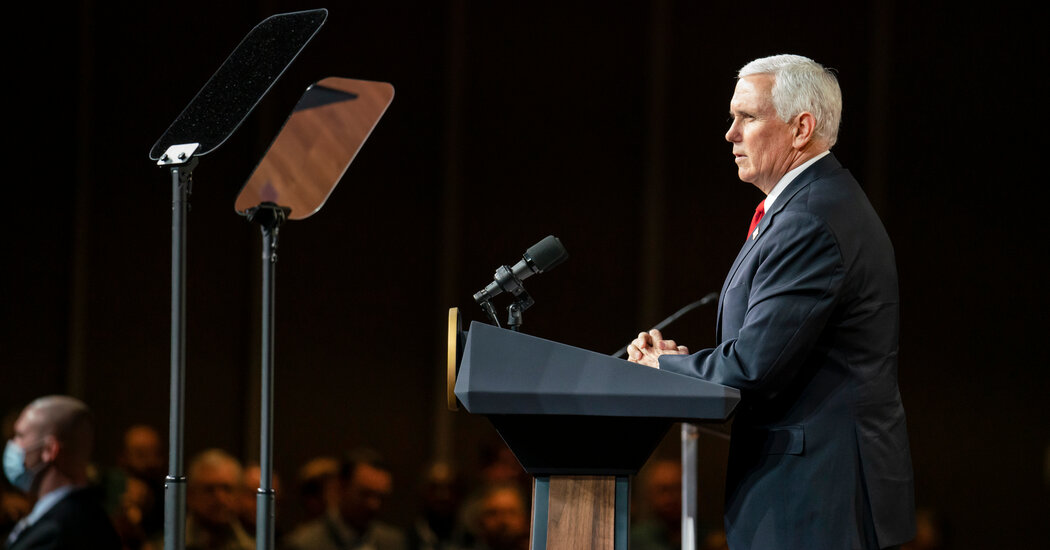 Vice President Mike Pence told President Trump on Tuesday that he did not believe he had the power to block congressional certification of Joseph R. Biden Jr.’s victory in the presidential election despite Mr. Trump’s baseless insistence that he did, people briefed on the conversation said.

Mr. Pence’s message, delivered during his weekly lunch with the president, came hours after Mr. Trump further turned up the public pressure on the vice president to do his bidding when Congress convenes Wednesday in a joint session to ratify Mr. Biden’s Electoral College win.

“The Vice President has the power to reject fraudulently chosen electors,” Mr. Trump wrote on Twitter on Tuesday morning, an inaccurate assertion that mischaracterized Mr. Pence’s largely formal and constitutionally prescribed role of presiding over the House and Senate as they receive and certify the electoral votes conveyed by the states and announcing the outcome.

Mr. Pence does not have the unilateral power to alter the results sent by the states to Congress.

More Republican senators came out on Tuesday against attempts to undermine the results, including Tim Scott of South Carolina and James M. Inhofe of Oklahoma, who said he viewed challenging any state’s certification as “a violation of my oath of office.”

In a process that is likely to go on for many hours, Mr. Pence will preside on Wednesday over a roll call of the states. If at least one senator and one House member object to the results from a state, they can force a debate of up to two hours about those results. Each chamber will then vote separately on whether to certify that state’s results.

For results to be overturned, both the House and the Senate would have to agree to do so. Because the House is controlled by the Democrats, there is no realistic possibility of any state’s outcome being rejected. In addition, many if not most Senate Republicans appear likely to join all Democrats in rejecting challenges to the results.

The House and Senate are expected to debate objections to the results in at least three states — Arizona, Georgia and Pennsylvania, all of which went to Mr. Biden — but ultimately to certify Mr. Biden’s 306-to-232 Electoral College victory.

Lawmakers anticipated possible objections for up to three more states — Michigan, Nevada and Wisconsin — although it was not clear whether they would draw the required backing from a member of both the House and the Senate.

When the results from all of the states have been considered, Mr. Pence, who as vice president also serves as presiding officer of the Senate, will be called on to read out the Electoral College votes for each candidate, formalizing Mr. Biden’s victory.

Mr. Pence has spent the past several days in a delicate dance, seeking at once to convey to the president that he does not have the authority to overturn the results of the election, while also placating the president to avoid a rift that could torpedo any hopes Mr. Pence has of running in 2024 as Mr. Trump’s loyal heir.

Even as he sought to make clear that he does not have the power Mr. Trump seems to think he has, Mr. Pence also indicated to the president that he would keep studying the issue up until the final hours before the joint session of Congress begins at 1 p.m. Wednesday, according to the people briefed on their conversation.

One option being considered, according to a person close to Mr. Trump, was having Mr. Pence acknowledge the president’s claims about election fraud in some form during one or more of the Senate debates about the results from particular states before the certification. Mr. Pence will preside over those debates.

Mr. Trump has been cajoling Mr. Pence in public and private to find a way to use his role on Wednesday to give credence to his unfounded claims — rejected by the states and in scores of court cases and backed by no evidence — that the election was stolen from him through widespread fraud.

The president has told several people privately that he would rather lose with people thinking it was stolen from him than that he simply lost, according to people familiar with his remarks.

Mr. Pence has spent hours with parliamentarians and lawyers in recent days. His allies said they expect him to carry out his constitutional duties on Wednesday.

If Mr. Pence were for some reason unable or unwilling to carry out his role as president of the Senate, that role would fall to Senator Charles E. Grassley, Republican of Iowa, the chamber’s longest-serving Republican member.

There was brief confusion on Tuesday morning when Mr. Grassley was quoted saying that he would be the one presiding over the certification, and not Mr. Pence, because “we don’t expect him to be there.”

Mr. Grassley’s aides later said he was suggesting a hypothetical, should Mr. Pence step out for a break at some point.

How much leeway Mr. Pence could have to interject his views or to stage manage the proceedings is a subject of debate among experts.

“The way Trump is phrasing it, there’s no merit,” said Edward B. Foley, director of the election law program at Ohio State University. “What Trump is asking for is control of the outcome that will lead to him being declared the president. That is definitely not within Pence’s power.”

But Mr. Foley said Mr. Pence would be able to add some “drama to the theater,” if he so chooses. As an example, Mr. Foley said the vice president could present “rival” packages of electoral votes for some states and force Congress to debate both simultaneously.

“We know the end result,” he said, “we just don’t know when we will get there or what procedure we will take to get there.”

In the days immediately after the election on Nov. 3, Mr. Trump was in shock but understood that he had lost, advisers said. But the more time that has passed, and the more that he has been enabled by a small group of people who have fed his belief that there is a mechanism to wipe away Mr. Biden’s win, the more invested in trying to reverse the outcome Mr. Trump has become.

Some of the president’s closest advisers publicly tried to give Mr. Pence cover on Tuesday as Mr. Trump stepped up the pressure on him.

“Some have speculated that the vice president could simply say, ‘I’m not going to accept these electors,’ that he has the authority to do that under the Constitution. I actually don’t think that’s what the Constitution has in mind,” Jay Sekulow, one of the president’s personal lawyers, said on his radio program on Tuesday, without mentioning that his client was one of the people making that assertion.

“If that’s the case, any vice president could refuse any election,” he said. “It’s more of a ministerial procedural function.”

Several allies of Mr. Pence said the vice president was getting mixed advice on what to do, and was desperate to find some middle ground.

One ally said that Mr. Pence would follow the rule of law, but that he was looking for a way to “thread the needle” so that his words were not played back on social media and used to ding Mr. Trump.

Another said that his advisers were being “realistic” about his options.

But some conceded that he would have benefited from telegraphing more aggressively over the past few days that he was not going to be able to rescue the president from defeat, rather than allowing suspense to build while attracting more attention to what they see as a no-win situation.

They said he could have also better explained to the public the ceremonial nature of the role rather than giving hope to Trump supporters like he did Monday in Georgia when he said that “we will have our day come Wednesday.”

Mr. Trump has sought input from another of his personal lawyers, Rudolph W. Giuliani; his trade adviser, Peter Navarro; and John Eastman, a lawyer who represented the president during a case brought by several Republican attorneys general against a handful of battleground states. The lawsuit was tossed out, but Trump advisers believe that Mr. Eastman is among the people counseling Mr. Trump that Mr. Pence has expansive powers.

Mark Meadows, the White House chief of staff, who has often been at odds with Mr. Pence’s chief of staff, Marc Short, has been described by several senior advisers as essentially enabling Mr. Trump’s hope of finding a magic pill to change the electoral results.

Mr. Meadows facilitated the president’s call with the secretary of state of Georgia on Saturday, during which Mr. Trump implored the official to “find” enough votes in the state to flip it from Mr. Biden’s column.