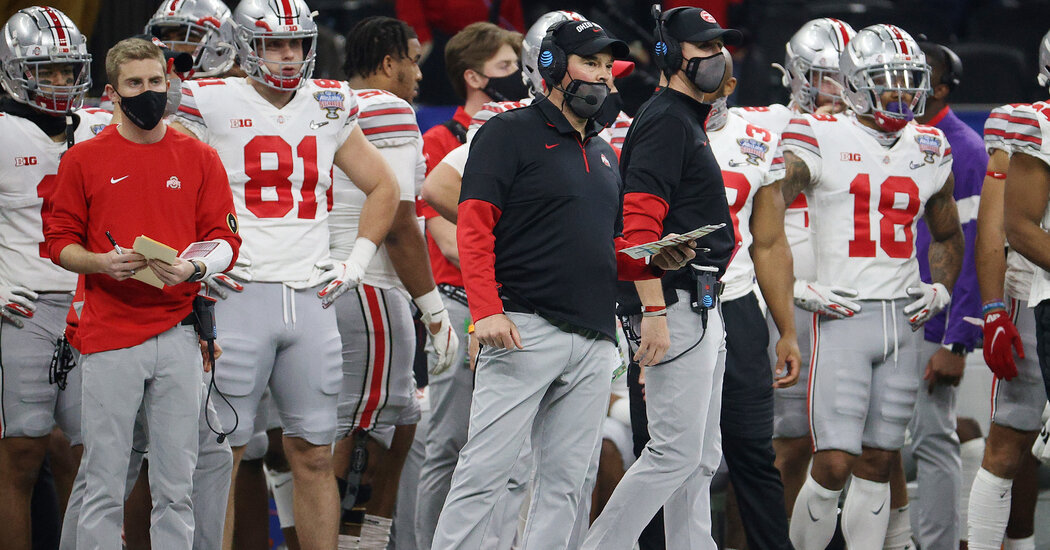 A college football season perpetually knocked sideways by the coronavirus pandemic is now preparing for a potential final blow as leaders consider whether they might need to postpone Monday’s national championship game because of virus cases at Ohio State, which is scheduled to play No. 1 Alabama for the title.

College Football Playoff executives, in conjunction with school and conference administrators, are considering a contingency plan if Ohio State is unable to field enough players in a position group, according to officials familiar with the deliberations.

Alabama Media Group first reported that the game in Miami Gardens, Fla., was in jeopardy of being delayed.

Bill Hancock, the playoff’s executive director, said in a brief interview Tuesday night that he and other organizers intended for the game to be played as scheduled.

“Nothing has changed,” Hancock said. “The game is on Jan. 11, as scheduled, and we’re looking forward to it.”

Still, the championship game may be as tenuous as many matchups have been this season, some of which have been canceled just hours before kickoff. A conference official, who spoke on the condition of anonymity because the deliberations were confidential and continuing, said that Ohio State had warned of new cases inside its third-ranked program — and of the possibility that testing in the coming days could reveal more troubles — but said that a postponement was not thought to be imminent.

“We continue to follow the same protocols we have all season,” Ohio State Athletic Director Gene Smith said. “We plan to play on January 11th.”

In a post on Twitter on Tuesday evening, Greg Byrne, Alabama’s athletic director, said he had repeatedly spoken with Smith and that “both schools are focused” on playing on Jan. 11.

Ohio State and Alabama have been two of the least transparent schools to play football this fall, with neither of them releasing any substantive data about the number of positive cases within their football teams. Both coaches, Ryan Day of Ohio State and Nick Saban of Alabama, have missed games after testing positive.