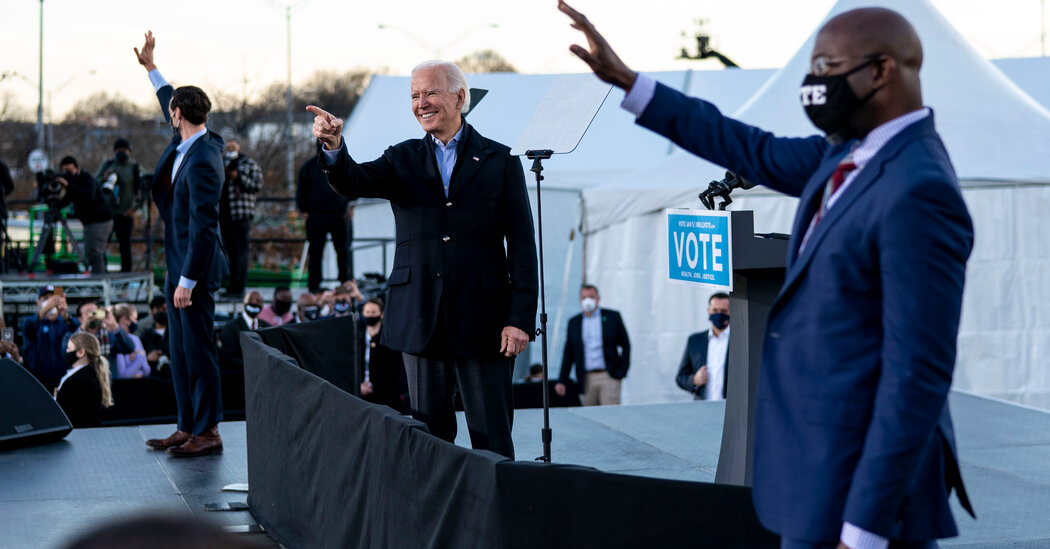 With one Democratic victory in Georgia already assured and the other Democratic candidate leading in his bid for the state’s second Senate seat, President-elect Joseph R. Biden Jr. said on Wednesday that he believed Democrats would take control of the Senate, a result that he said signaled a demand for immediate action from the nation’s leaders.

“Georgia’s voters delivered a resounding message yesterday: they want action on the crises we face and they want it right now,” Mr. Biden said in a statement.

Mr. Biden congratulated the Rev. Raphael Warnock, who beat the Republican incumbent, Kelly Loeffler, and said that he believed Jon Ossoff would also be victorious in his race against David Perdue, his Republican challenger. Mr. Ossoff leads by more than 17,000 votes, but the race remains too close to call.

Winning both seats would give Democrats and Republicans each 50 seats in the Senate, with Vice President-elect Kamala Harris having the power to cast tiebreaking votes. In the House, Democrats hold a slim majority.

“I’m pleased that we will be able to work with Speaker Pelosi and a Majority Leader Schumer,” Mr. Biden said, while also pledging again to try and reach a bipartisan consensus on major issues.

At a celebratory news conference in Washington, Mr. Schumer said that Congress’s first order of business would be to approve $2,000 direct payments for Americans struggling in the face of the coronavirus pandemic.

He also suggested that Democrats would take advantage of their first Senate majority in six years.

“We are united in wanting big, bold change, and we are going to sit down as a caucus and discuss the best ways to get that done,” he said.

Mr. Biden, in his statement, also thanked Stacey Abrams, who has spent the last decade building a Democratic political infrastructure in Georgia and increasing turnout there among people of color.

The president-elect said that both Ms. Abrams and Keisha Lance Bottoms, the mayor of Atlanta, had “laid the difficult groundwork necessary to encourage turnout and protect the vote over these last years.”