Blog | Alphhainc
Home US A Democratic takeover of the Senate would redefine Biden’s presidency in dramatic... 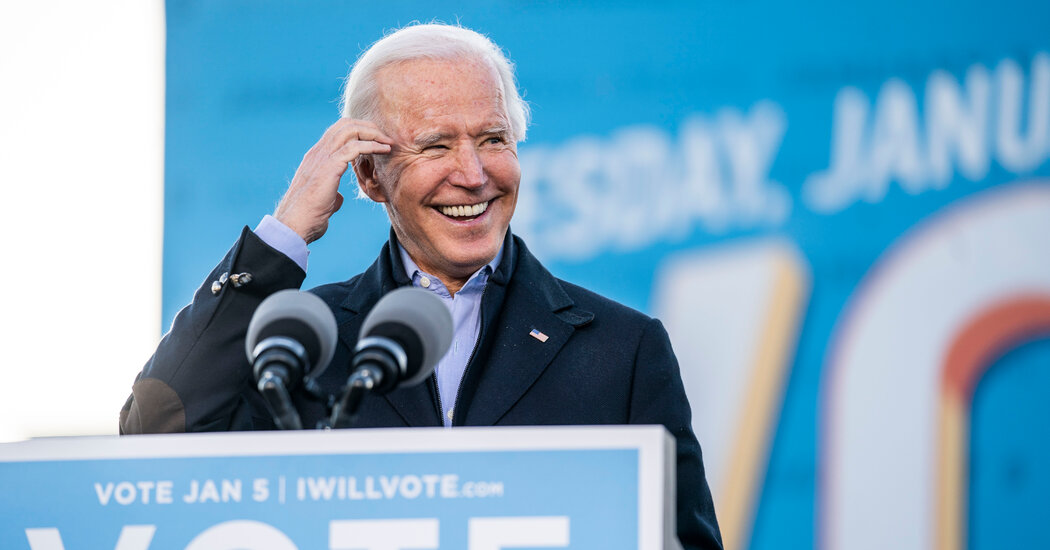 President-elect Joseph R. Biden Jr. on Tuesday promoted the Senate runoffs in Georgia as an opportunity “to break the gridlock that has gripped Washington,” and his team was cautiously optimistic about the outcome.

In recent days many on his team had downplayed the idea that they would command a legislative majority in the Senate — out of superstition, several jittery Democratic aides suggested in the days leading up to the election.

But the growing possibility of one-party control has now been hurled on their doorstep.

In the most basic sense, the addition of two Democrats — the Rev. Raphael Warnock, who has won his race, and Jon Ossoff, who is maintaining a lead in his — to the Senate would redefine Mr. Biden’s approach to lawmaking, giving him more power but possibly challenging his preferred approach of broad bipartisan deal-making.

“Biden will say all the public things about how he needs to get Republican support, but the truth is that this fundamentally changes the dynamic,” said David Krone, former chief of staff to former Senator Harry Reid, the last Democratic majority leader. “Democrats now control the floor. So he can bring up all kinds of bills that would have been blocked by the Republicans, and force votes on big bills — like a major infrastructure package — that never would have seen the light of day.”

During the primaries and general election, Mr. Biden and his aides pointed out that he had developed a sturdy, if not overly warm, working partnership with the Republican leader, Senator Mitch McConnell. But a Senate takeover might require a shift in Mr. Biden’s compromising approach in favor of the hard-edge tactics demanded by his party’s ascendant left wing.

Embedded in the Democrats’ jubilation Wednesday was a gnawing sense of urgency.

Many in the party fear a Republican takeover of the House in 2022, and a similar possibility looms in the deadlocked upper chamber. But many in Mr. Biden’s circle believe he has two years to jam through Democratic priorities, starting with his pledge to pass a $2,000 payout to ease the economic hardship of the pandemic.

Controlling the majority offers many new opportunities. The central role of Black voters in Georgia and elsewhere virtually ensures that Mr. Biden will push civil and voting rights reform, one Democratic leadership aide said in condition of anonymity. But it also means he will have to referee fierce disagreements among Democratic factions that have already begun feuding in the House over the Green New Deal and expansion of health care.

While all eyes were on the twilight machinations of Vice President Mike Pence on Wednesday, his replacement will have significantly more power.

She will play a decisive role in the 50-50 Senate on party-line votes, exercising real legislative power and positioning her as Mr. Biden’s visible partner and natural successor, especially if he chooses not to run for re-election in 2024.