Blog | Alphhainc
Home US D.C. braces for two days of protests as the leader of the... 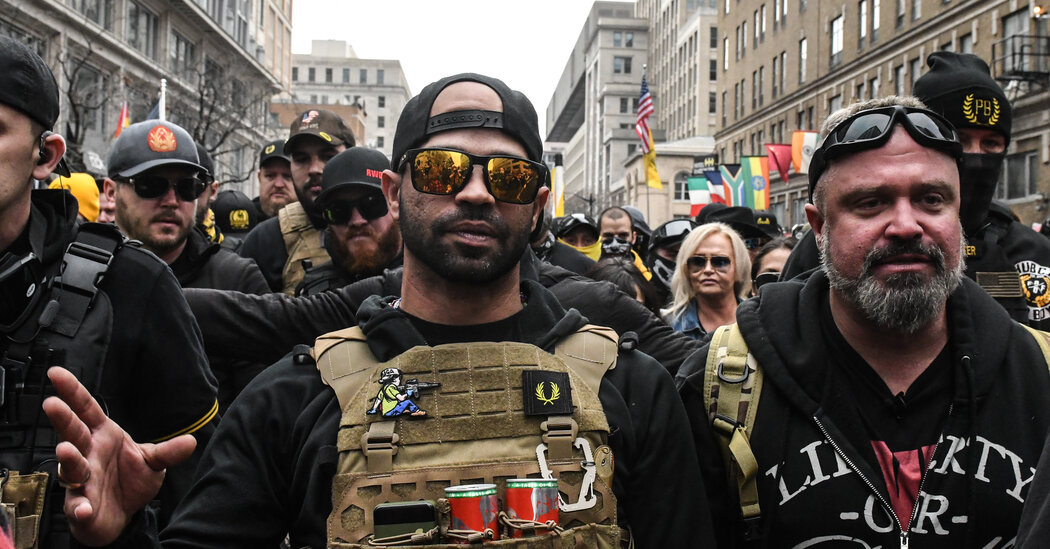 The leader of the Proud Boys, a far-right group that has vocally supported President Trump’s efforts to overturn the election results, was arrested on Monday in Washington as Mayor Muriel Bowser requested support from the Army National Guard before expected protests of the November vote in the nation’s capital.

Enrique Tarrio, 36, the chairman of the Proud Boys, was arrested by the Metropolitan Police on suspicion of burning a Black Lives Matter banner that was torn from a historic Black church in Washington during protests last month that led to several violent clashes, including stabbings, around the city.

A spokesman for the Metropolitan Police Department confirmed that Mr. Tarrio, 36, had been arrested on charges of destruction of property. Upon his arrest, he was found to have two high-capacity firearm magazines and charged accordingly with possession.

The protests by the Proud Boys and other groups are expected to occur on Tuesday and Wednesday.

In anticipation, officials announced that about 340 Army National Guard troops are expected to deploy on Tuesday and remain for two days in support of local law enforcement. Their mission is to help control traffic and to protect the streets and public transit stops, officials said.

“The District of Columbia National Guard is in a support role to the Metropolitan Police Department, which will enable them to provide a safe environment for our fellow citizens to exercise their First Amendment right to demonstrate,” Maj. Gen. William J. Walker, the commanding general of the D.C. National Guard, said in a prepared statement.

In June, Mr. Trump raised the option of deploying active-duty troops onto the streets and ran into resistance from both his defense secretary at the time, Mark T. Esper, and Gen. Mark A. Milley, the chairman of the Joint Chiefs of Staff. The president eventually backed down.

Some Pentagon officials acknowledged that they were worried about a possible repeat: that Mr. Trump could seek to use civil unrest, especially if it turned violent, to deploy active-duty troops to restore order.

Since the protests in June, some of the country’s senior military leaders have talked among themselves about what to do if Mr. Trump again tries to invoke the Insurrection Act to deploy active-duty troops into the streets, Pentagon officials confirmed. The Insurrection Act enables a president to send active-duty troops to quell disturbances over the objections of governors.

Pentagon officials have been keeping track of nightly episodes of civil unrest across the country, in order for Defense Department officials to be able to counter any narrative that might come from the White House that such occurrences could not be handled by local law enforcement.