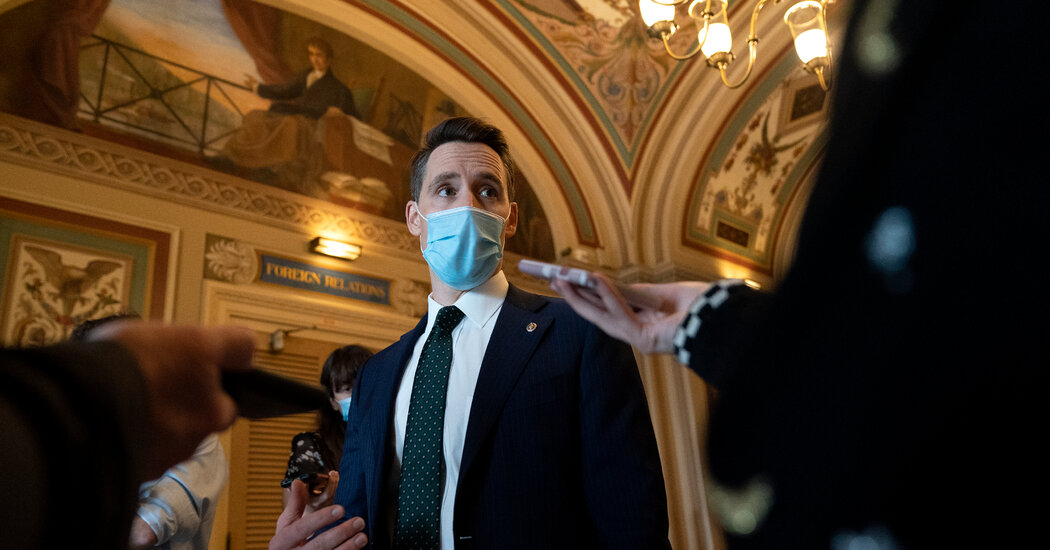 WASHINGTON — Eleven Republican senators and senators-elect said on Saturday that they would vote to reject President-elect Joseph R. Biden Jr.’s victory next week when Congress meets to formally certify it, defying the results of a free and fair election to indulge President Trump’s futile attempts to remain in power with false claims of voting fraud.

While their move will not change the outcome, it guarantees that what would normally be a perfunctory session on Capitol Hill on Wednesday to ratify the results of the presidential election will instead become a partisan brawl, in which Republicans amplify specious claims of widespread election rigging and impropriety that were dismissed by courts across the country.

It will also expose deep rifts among Republicans at a critical time, forcing them to choose between accepting the results of a democratic election — even if it means angering supporters who dislike the outcome — and displaying loyalty to Mr. Trump, who has demanded that they back his bid to cling to the presidency.

In a joint statement, the Republicans — including seven senators and four who are to be sworn in on Sunday — called for a 10-day audit of election returns in disputed states, and said they would vote to reject the electors from those states until one was completed.

The group is led by Senator Ted Cruz of Texas and also includes Senators Ron Johnson of Wisconsin, James Lankford of Oklahoma, Steve Daines of Montana, John Kennedy of Louisiana, Marsha Blackburn of Tennessee and Mike Braun of Indiana, and Senators-elect Cynthia Lummis of Wyoming, Roger Marshall of Kansas, Bill Hagerty of Tennessee and Tommy Tuberville of Alabama.

Together with Senator Josh Hawley of Missouri, who announced this week that he would object to Congress’s certification of the election results, they bring the proportion of Senate Republicans who have broken with their leaders to join the effort to invalidate Mr. Biden’s victory to nearly one quarter. In the House, more than half of Republicans joined a failed lawsuit seeking to overturn the will of the voters, and more are expected to support the effort to challenge the results in Congress next week.

While the senators’ statement called the Jan. 6 vote “the lone constitutional power remaining to consider and force resolution of the multiple allegations of serious voter fraud,” there is no provision in the Constitution for such a review after the Electoral College has certified the election.

In the statement, the Republicans cited poll results showing most members of their party believe the election was “rigged,” an assertion that Mr. Trump has made for months, and which has been repeated in right-wing media and by many Republican members of Congress, including many of them.

“A fair and credible audit — conducted expeditiously and completed well before January 20 — would dramatically improve Americans’ faith in our electoral process and would significantly enhance the legitimacy of whoever becomes our next president,” they wrote. “We are acting not to thwart the democratic process, but rather to protect it.”

They also noted that their effort was likely to be unsuccessful, given that any such challenge must be sustained by both the House, where Democrats hold the majority, and the Senate, where top Republicans including Senator Mitch McConnell of Kentucky, the majority leader, has tried to shut it down.

“We fully expect most if not all Democrats, and perhaps more than a few Republicans, to vote otherwise,” the senators wrote.

Congress’s certification process is typically a procedural step, but as Mr. Trump continues to perpetuate the myth of widespread voter fraud, Republicans in Congress have been eager to challenge the results. That is the case even though the vast majority of them just won elections in the very same balloting they are now claiming was fraudulently administered.

Mr. McConnell has discouraged lawmakers in the Senate from joining the House effort, and Senator John Thune of South Dakota, the No. 2 Republican, told reporters the challenge to the election results would fail in the Senate “like a shot dog,” prompting a Twitter tirade from Mr. Trump.

Senator Ben Sasse, Republican of Nebraska, on Thursday condemned the attempt, rebuking it a “dangerous ploy” intended to “disenfranchise millions of Americans.”

Biden at Ceremony for Coronavirus Victims Says ‘To Heal, we Must Remember’

Retooling During Pandemic, the SAT Will Drop Essay and Subject Tests