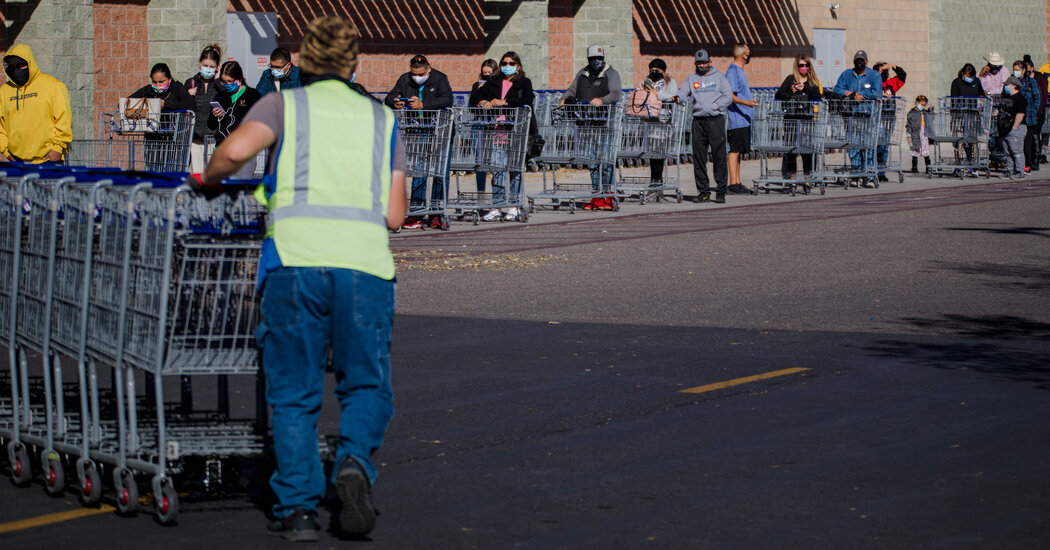 Whether behind the cash register, stocking milk or unloading shipments of toilet paper, grocery store employees have for months been risking their safety to earn a paycheck and make necessities available to Americans, even as the hazard pay that some companies once offered has dwindled and government benefits dry up.

But as more workers fall ill, more supermarkets may be forced to close. In New Mexico this month, health officials have ordered 23 stores and restaurants to close for two weeks because of sick workers.

Walmart, Albertsons, Target and McDonald’s stores have all been affected. Some have stayed open after being ordered to close, The Albuquerque Journal reported. And in some places, lines are growing.

“I think everybody’s a little like, ‘Oh no, we got to go get our groceries. Everything’s going to close down,’” Anna Hagele told the newspaper. She was waiting in line with about 40 other people outside of an Albertsons.

Gov. Michelle Lujan Grisham, a Democrat, defended the unpopular closures at a virtual news conference this week. Some shoppers have complained to the local news media about long lines of panicking buyers at the stores that remain open.

“You can’t have a grocery store or another big box store that sells groceries if all of their employees — or the vast majority of them — have Covid,” Ms. Lujan Grisham said. “There’s so much of this infection that it’s inside the very places need to access.”

The state is ordering shops to close for two weeks if they have four separate instances of an employee testing positive for the virus in a two-week period. At least 14 businesses are under closure orders, including some which will not be allowed to reopen until Dec. 2.

A sharp jump in virus cases in New Mexico — the number of average cases reported each day this week is up 127 percent from the week before — has led the state to issue some of the tightest restrictions of any state in recent weeks.

Sale of Arctic Refuge Oil and Gas Leases Is Set for...

Sale of Arctic Refuge Oil and Gas Leases Is Set for...