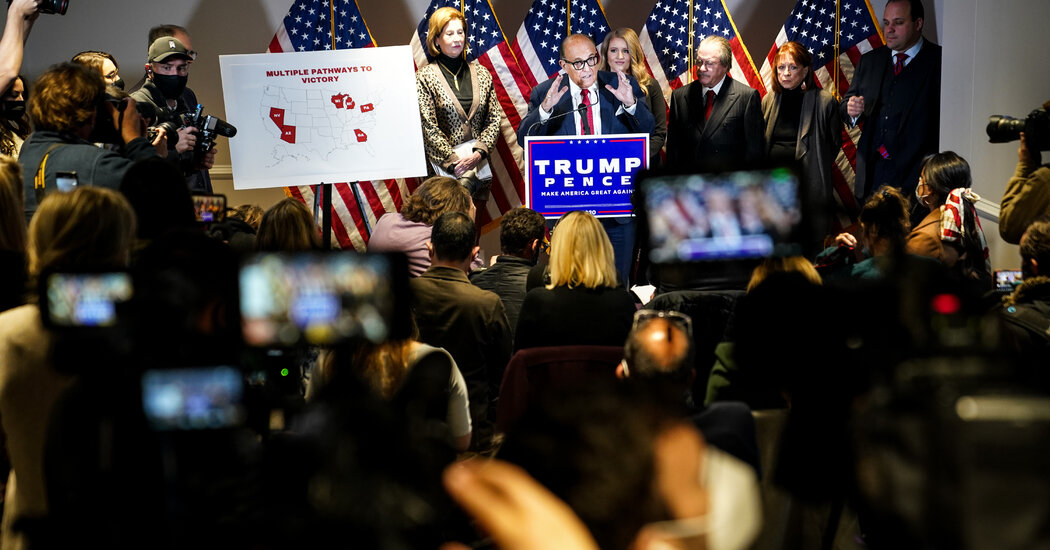 In a chaotic effort to overturn the election results, President Trump and lawyers representing his campaign have spent weeks claiming without convincing proof that rampant voter fraud corrupted vote tallies in many battleground states.

But their lawsuits challenging the outcome have repeatedly broken down because of defective filings, sloppy paperwork, dubious claims by witnesses and lawyers who have admitted in court that they were not alleging fraud.

Here are some of the more embarrassing moments.

Days after the election, lawyers for the Trump campaign brought a lawsuit in Maricopa County claiming, in part, that some number of Republican voters used Sharpies to mark their ballots, rendering them unreadable by voting machines and leading to uncounted votes.

The complaint also included affidavits from several voters and poll watchers who said that poll workers had capitalized on the confusion to nullify votes for Mr. Trump.

But in a hearing on Nov. 12, Kory Langhofer, a lawyer for the Trump campaign, conceded that the complaint was not based on evidence of voter fraud but rather on a “limited number of cases” of “good-faith errors” in the count.

“This is not a fraud case,” Mr. Langhofer said. “We are not alleging fraud. We are not saying anyone is trying to steal the election.”

Under questioning, witnesses repeatedly stated that they did not have any reason to believe that their ballots or those of other voters were not counted.

Later in the hearing, Daniel Arellano, the Arizona Democratic Party’s counsel, directed questions to Zack Alcyone, one of the witnesses, who admitted that he was a business partner of Mr. Langhofer’s.

Asked if he was being paid to testify in the case, Mr. Alcyone said he was uncertain.

“But you may be?” Mr. Arellano asked.

A federal lawsuit brought by the conservative lawyer L. Lin Wood Jr. sought to halt the statewide certification of the vote in Georgia, claiming that systemic issues with the election process had marred the state’s results.

Russell J. Ramsland Jr., a cybersecurity worker and an expert witness in the case, filed an affidavit on Wednesday claiming that his company had uncovered evidence of inconsistencies in electronic voting machines. But the inconsistencies he claimed to identify were in districts in Michigan, not Georgia.

In a hearing on Thursday, the Trump-appointed judge, Steven D. Grimberg, pushed back against claims of voter fraud.

“I understand that’s your argument, but what’s your evidence?” he asked after listening to Ray S. Smith III, a lawyer for Mr. Wood.

“To halt the certification at literally the 11th hour would breed confusion and disenfranchisement that I find have no basis in fact and law,” Judge Grimberg said.

He rejected the challenge.

In an opinion issued on Nov. 13, a federal judge in Michigan methodically dismantled testimony from six witnesses who claimed to have observed irregularities in the vote-counting process in Detroit.

Casting doubt on their credibility and knowledge of the electoral process, Judge Timothy M. Kenny noted that the witnesses had skipped an information session that may have answered many of the questions they raised.

“Perhaps if plaintiffs’ election challenger affiants had attended the Oct. 29, 2020, walk-through of the TCF Center ballot-counting location, questions and concerns could have been answered in advance of Election Day,” he wrote. “Regrettably, they did not and, therefore, plaintiffs’ affiants did not have a full understanding of the TCF absent ballot tabulation process.”

In a separate case targeting absentee ballots in Michigan, a lawyer for the Trump campaign appeared to have initially filed the lawsuit in error in a federal claims court in Washington, D.C., that lacked the authority to hear it.

“The complaint is captioned as though it were filed in the United States District Court for the Western District of Michigan,” Judge Elaine D. Kaplan wrote in an order transferring the case to the proper court. “Instead, however, it was filed with this court, presumably by accident.”

Anticipating that Pennsylvania would be the tipping point in the election, lawyers for the Trump campaign prepared for legal challenges contesting votes in several parts of the state.

In recent weeks, however, the lawyers have repeatedly acknowledged when pressed by judges that no evidence of election fraud materialized.

In Federal District Court in Williamsport, Pa., the president’s lead lawyer, Rudolph W. Giuliani, broke with his comments outside the courtroom backing the president’s claims of widespread fraud.

“This is not a fraud case,” he told Judge Matthew W. Brann.

In oral arguments in a case in Montgomery County on Nov. 10, Jonathan Goldstein, a lawyer for the Trump campaign, stated repeatedly that he also had not seen evidence of voter fraud in the vote that was contested there:

THE COURT: In your petition, which is right before me — and I read it several times — you don’t claim that any electors or the Board of the County were guilty of fraud, correct? That’s correct?
MR. GOLDSTEIN: Your honor, accusing people of fraud is a pretty big step. And it is rare that I call somebody a liar, and I am not calling the board of the D.N.C. or anybody else involved in this a liar. Everybody is coming to this with good faith. The D.N.C. is coming with good faith. We’re all just trying to get an election done. We think these were a mistake, but we think they are a fatal mistake, and these ballots ought not be counted.
THE COURT: I understand. I am asking you a specific question, and I am looking for a specific answer. Are you claiming that there is any fraud in connection with these 592 disputed ballots?
MR. GOLDSTEIN: To my knowledge at present, no.
THE COURT: Are you claiming that there is any undue or improper influence upon the elector with respect to these 592 ballots?
MR. GOLDSTEIN: To my knowledge at present, no.

Lawyers representing the Trump campaign in Bucks County signed court documents on Wednesday informing a judge that there was no evidence of fraud in relation to ballots they were contesting there.

The campaign had filed suit in the county’s Court of Common Pleas challenging more than 2,200 ballots as invalid. But in a joint stipulation of facts with lawyers for the Democratic Party, the Trump campaign’s lawyers admitted, “Petitioners do not allege, and there is no evidence of, fraud in connection with the challenged ballots.”

The lawyers also stated there was no evidence of any “misconduct” or “impropriety” in the election.