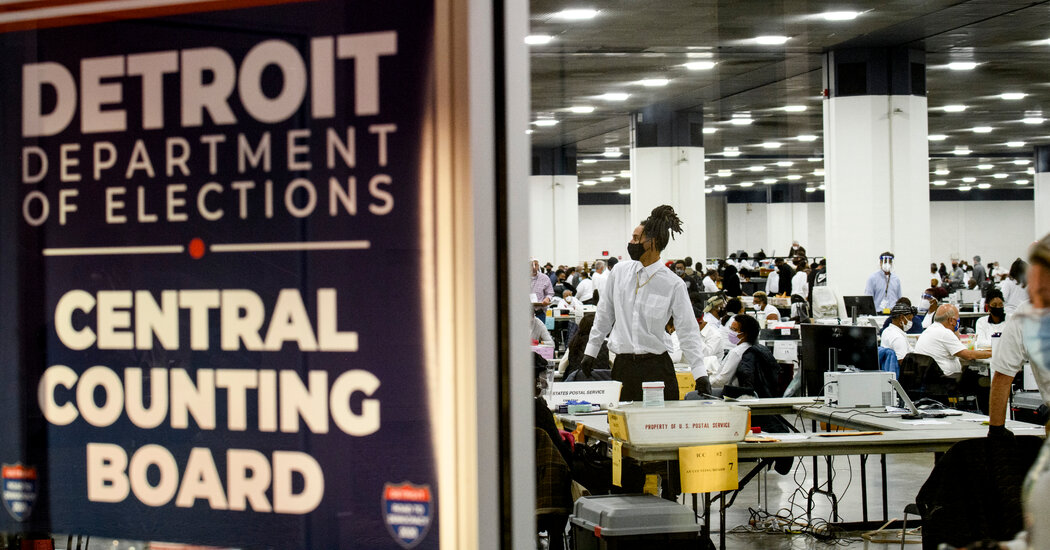 For a few hours on Tuesday, it looked as though two Republican officials in Wayne County, Mich., might reject the will of hundreds of thousands of voters.

The election canvassing board in Wayne County — a largely Democratic area that includes Detroit — met to certify the results of the Nov. 3 election and deadlocked along party lines, with the board’s two Democrats voting to certify and its two Republicans voting not to.

The Republican members, William Hartmann and Monica Palmer, said they were concerned about small discrepancies between the number of votes cast in some precincts and the number of people precinct officials recorded as having voted.

But these sorts of inconsistencies are not out of the ordinary. They can happen if, for instance, a voter checks in but then gets frustrated by a long line and leaves.

They were nowhere near significant enough in Wayne County, or anywhere else in Michigan, to change President-elect Joseph R. Biden Jr.’s victory. Mayor Mike Duggan of Detroit said they involved just 357 votes out of about 250,000 cast in the city.

Election certification is supposed to be routine: Canvassers at the county or municipal level (depending on the state) review precinct results, make sure every ballot is accounted for and every vote was counted, double-check the totals and send the certified numbers to state officials. It’s the process by which the results reported on election night are confirmed.

This is basically an accounting task. If the canvassers find possible errors, it is their job to look into and resolve them, but refusing to certify results based on minor discrepancies is not normal. Michigan’s canvassing boards always have four members split between the two parties, and it is extremely rare for members to decline to certify an election that their party lost.

“It is common for some precincts in Michigan and across the country to be out of balance by a small number of votes, especially when turnout is high,” Jocelyn Benson, the Michigan secretary of state, said in a statement Tuesday evening. “Importantly, this is not an indication that any votes were improperly cast or counted.”

It is also highly abnormal to suggest, as Ms. Palmer did, that canvassers certify the results in one place but not another when there is no meaningful difference between the two in terms of the number or severity of discrepancies.

Before the deadlock was resolved, Ms. Palmer had proposed certifying the results in “the communities other than the city of Detroit.” As Democrats and election law experts noted, nearly 80 percent of Detroit residents are Black. By contrast, in Livonia — a city west of Detroit that had the second-highest number of discrepancies in the county, but whose results Ms. Palmer was willing to certify — less than 5 percent of the population is Black.

After intense backlash, both from election watchdogs and from voters whom Representatives Debbie Dingell and Rashida Tlaib organized to call in to the canvassing board’s meeting, Mr. Hartmann and Ms. Palmer voted to certify the results after all. While they demanded that Ms. Benson conduct an audit of the Wayne County results, that will not delay the certification process.

By Wednesday morning, every county in Michigan had certified its results. The Board of State Canvassers will meet on Nov. 23 to certify the statewide totals.

Georgia Was a Big Win for Democrats. Black Women Did the...

Tenants Sue Trump Over Scheme That Drove Up Their Rents