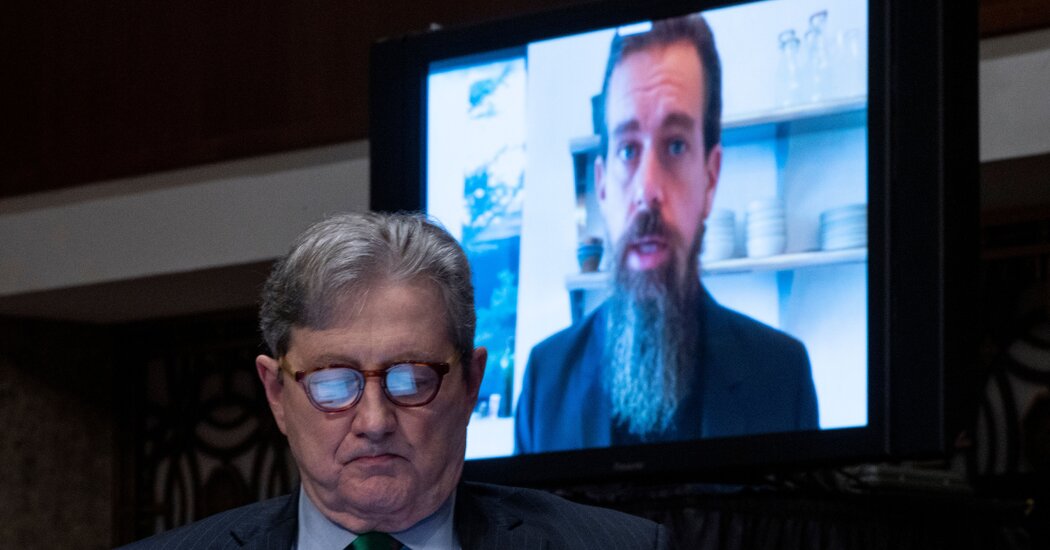 Republicans continued on Tuesday to press their case against Facebook and Twitter, arguing in a hearing before a Senate panel that their decisions to limit the distribution of factually questionable content that was favorable to President Trump amounted to improper influence in the election.

“I don’t want the government to take over the job of telling America what tweets are legitimate and what are not,” Senator Lindsey Graham, Republican of South Carolina, said at a Judiciary Committee hearing during which Jack Dorsey and Mark Zuckerberg were subjected to hours of questioning.

Mr. Graham, the chairman of the committee, zeroed in on the moves by both companies to prevent sharing of a New York Post story last month that contained information taken off a hard drive that was said to belong to Hunter Biden, the son of President-elect Joseph R. Biden Jr. The story specified that the hard drive had been provided to The Post by Rudolph W. Giuliani, Mr. Trump’s lawyer.

“Why do you have editorial control over The New York Post?” Mr. Graham asked. “That seems, to me, like you’re the ultimate editor.”

At the heart of Mr. Graham’s questioning was a provision in federal communications law, known as Section 230, that has limited the liability that open-platform online networks like Facebook and Twitter face when its users post objectionable, offensive and malicious content. Some lawmakers have favored removing that liability shield and treating the companies more like traditional news media companies, which are less protected because they exercise their own editorial decisions.

Mr. Dorsey, the chief executive of Twitter, appeared contrite about the episode, explaining that the company’s decision to stop its users from seeing the Post story was based on a mistake. Initially, Twitter had said that the story’s contents were based on hacked information. But once the company determined that was not the case, he said, it reversed its decision.

The debate over revising Section 230 is expected to be a focus in Congress next year.

Senator Chris Coons, Democrat of Delaware, also raised concerns with how the companies were policing content but with different problems in mind, showing how broad bipartisan agreement on the need for greater regulation breaks down in the details.

“The inescapable fact is your algorithms, your policies and your business decisions shape what billions of people across the world and a working majority of people here in our nation understand to be true,” Mr. Coons said, addressing Mr. Zuckerberg. “That’s the case for election integrity, for a potential Covid-19 vaccine, for climate change, for hateful and dangerous stereotypes.”

Senator Josh Hawley, Republican of Missouri, vowed action against what he called the “modern-day robber barons” of Facebook and Twitter in a tense exchange with Mr. Zuckerberg over the ability of Facebook employees to gain access to the personal information of its users.

Senator Mike Lee, Republican of Utah, complained that one of his Facebook posts about the election had been flagged as questionable.

Senator Joni Ernst, Republican of Iowa, said it was a concern that so many of Facebook’s employees were based in California and therefore presumably left-leaning in their political views.

But Mr. Zuckerberg said there was little the company could or would do about that. “I don’t think it would be appropriate to ask people on the way in, as we’re interviewing, what their political affiliation is,” he said.

Though Republicans currently hold a majority in the Senate — and would next year if they hold on to one of the two seats that will be decided by voters in Georgia in January — there is Democratic support for reforming the law as it relates to social media companies, which Democrats believe have been allowed to spread misinformation without consequence.

“Change is going to come,” Senator Richard Blumenthal, Democrat of Connecticut, said in opening remarks. “No question. And I plan to bring aggressive reform to 230.”