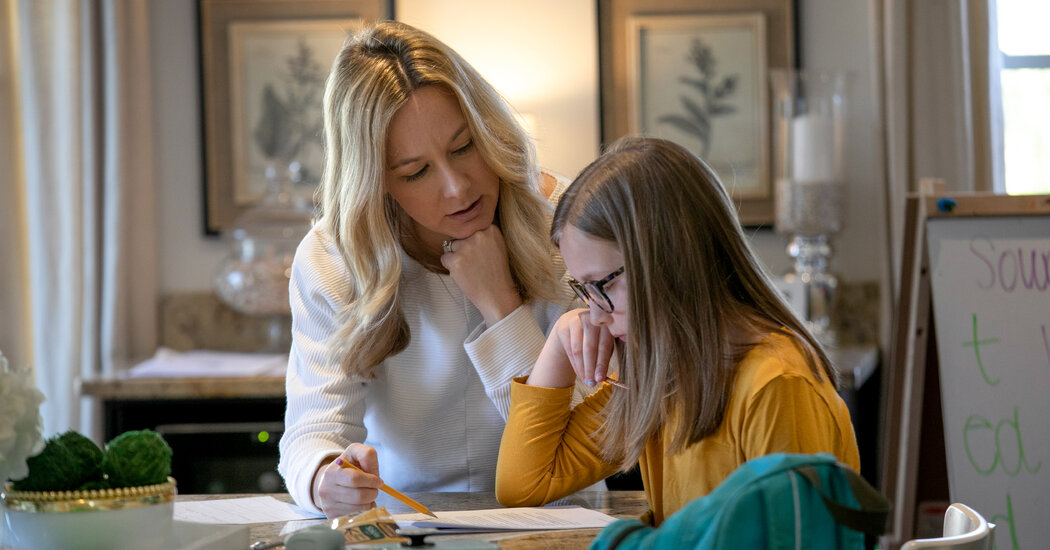 Compared with their fathers and grandfathers, this generation of men is much more involved at home — showing up at midday school events, coaching soccer and cooking dinner. Yet when the pandemic hit, it was largely mothers who took on the additional child care duties; became remote teachers; and, in large numbers, quit their jobs.

The sudden return to 1950s-style households wasn’t an aberration. Rather, it revealed a truth: In the United States, mothers remain the fallback plan.

Today, even though most mothers are employed and fathers have increased the hours they spend on housework and child care, women still spend about an hour more a day on each. Moreover, when unexpected demands pop up — like a child who is home sick or a work meeting that conflicts with child care duties — mothers prioritize the home front, research shows.

As a result, men’s careers aren’t slowed by family caregiving needs nearly as much as women’s are.

“The Covid crisis is a perfect instance of the gendered fallback plan, just on a grander scale than we usually observe,” said Sarah Thébaud, a sociologist at the University of California, Santa Barbara.

This doesn’t describe every family, of course. There are men who have quit their jobs or cut their hours to care for their children during the pandemic, and men who have always been the on-call parent, just as there are single parents and same-sex parents who have not fallen back on traditional gender roles.

And it’s often the rational choice — the man in a family usually earns more, so if someone needs to cut hours or quit a job, it can make sense for it to be the woman. But that starts a vicious cycle: The major reason women are paid less in the first place is that they work fewer and more flexible hours once they have children — or even if they don’t work less, employers assume they will.

There is ample pre-pandemic evidence showing what happens in many opposite-sex couples when schools and child care centers close: When unexpected family needs arise, mothers fill in.

Research on millennials has found that the vast majority say they want relationships in which they equally share moneymaking and homemaking. But when they have children and face the daily challenges of family life, a majority change their mind, and say the woman should be the primary caregiver, several studies have found.

Part of the reason is that the United States has fewer family-friendly policies and benefits than other rich countries — a pattern that has continued during the pandemic. But even in Scandinavian countries, which are much more egalitarian in their attitudes and policies, mothers are the fallback plan.

A study using a large data set from Norway found that having a sick or disabled child reduces earnings and increases work absences for mothers, but much less so for fathers. A study in Sweden found that after a child’s cancer diagnosis, mothers took much more leave than fathers did, regardless of each parent’s income.

When work and family obligations collide and someone needs to sacrifice at work, it’s much more likely to be the mother than the father, research suggests. It seems that it’s not because men’s jobs are inherently less flexible or more important — but that they treat them as though they are.

Pre-pandemic, even men who said they needed flexibility were much less likely than women to reduce in-person time at work. In couples in which men worked very long hours, wives were likely to quit their jobs to be on call at home — but when women worked long hours, their husbands did not quit. And when men left work for family reasons, they slipped out without saying why, while women took official time off.

The pandemic has exacerbated the difference. When schools and child care centers closed, mothers immediately took on the fallback role. A survey last spring, by Morning Consult for The New York Times, found that eight in 10 mothers are managing remote schooling, and seven in 10 are doing the bulk of child care.

A separate survey by Morning Consult for The Times found that among couples working from home during the pandemic, men were more likely than women to work in a home office in a separate room. Women were more likely to work at the kitchen table — where they could be interrupted at any moment by children or household needs.

Mothers are the fallback plan in the United States in part because of persistent beliefs that they are ultimately responsible for homemaking and child rearing, and because of the lack of policies to help parents manage the load.

“Other countries have social safety nets; the U.S. has women,” Jessica Calarco, a sociologist at Indiana University, told the journalist Anne Helen Petersen in a recent interview for her newsletter, Culture Study.

Even so, attitudes and policies in the United States had been slowly evolving — men were handling more child care, for example, and paid family leave was becoming more common. Now that the pandemic has forced a generation of mothers into the fallback role, it’s unclear how much of that change will continue.