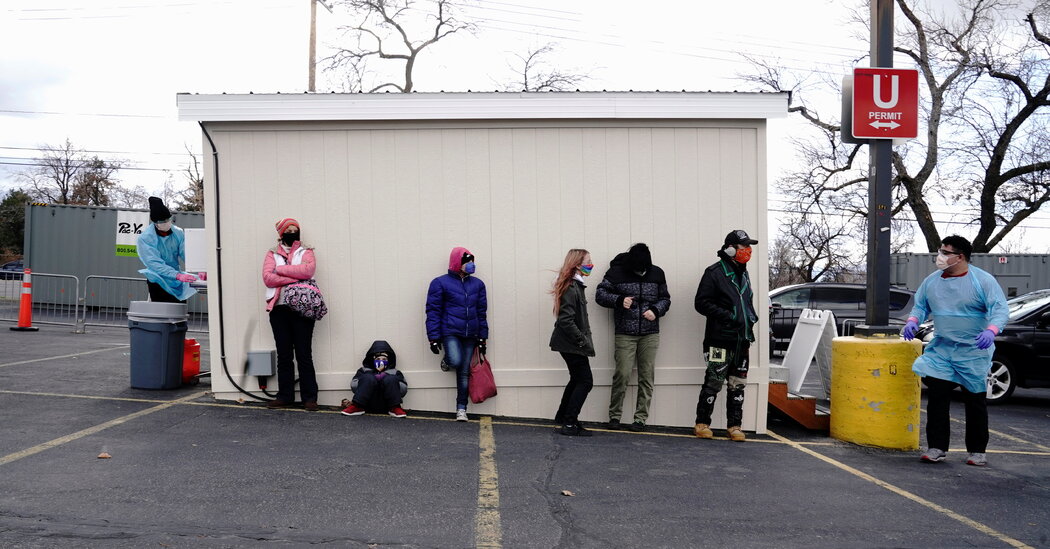 President-elect Joseph R. Biden warned on Monday that “more people may die” from the coronavirus if President Trump does not agree to coordinate planning for the mass distribution of a vaccine when it becomes available.

Mr. Biden also issued a simple plea. Holding up a paper medical mask, he asked: “Does anybody understand why a governor would turn this into a political statement?”

In the United States, the wearing of a mask has been caught up in the swirl of the nation’s toxic political divide long after the scientific community reached a consensus that they can play a dramatic role in slowing the spread of the virus and saving lives.

For months, Republican governors resisted calls for mask mandates. But as they have watched hospitals in their states stretched to the breaking point in recent weeks — driving home the reality of the dangers posed by a virus allowed to spread unchecked — that is starting to change.

In Utah last week, Gary Herbert, the Republican governor, issued a mask mandate “until further notice” as hospitals across the state were nearing or at full capacity.

Gov. Doug Burgum of North Dakota ordered residents of the state on Friday to wear masks indoors and outdoors if they could not socially distance. North Dakota has the country’s highest rates of new daily cases and deaths per person, according to a New York Times database.

Then on Monday evening, Kim Reynolds, the governor of Iowa, struck a somber tone as she announced that, starting Tuesday, Iowans would need to wear masks while indoors if they are unable to maintain social distance.

“There aren’t enough sheriffs in Iowa’s 99 counties to shut down every noncompliant bar,” she said. “If Iowans don’t buy into this, we lose,” she said, warning that schools and businesses could be closed.

Ms. Reynolds had flouted infectious disease experts who say masks are one of the most effective tools to control the spread of the virus. In September, she issued guidance that told students, teachers and workers that they did not have to quarantine after being in close contact with someone who was infected as long as both were wearing masks.

The rates of new daily cases and hospitalizations have roughly doubled in Iowa over the past two weeks.

Gov. Mike DeWine of Ohio, who is reportedly considering imposing a curfew on businesses, is expected to hold a news conference on Tuesday to announce plans to combat the spike in cases in his state.

But even before Mr. DeWine made any announcement, Mr. Trump issued a warning on Twitter, suggesting that he might support a primary challenger against the Republican governor.

“Who will be running for Governor of the Great State of Ohio? Will be hotly contested!” Mr. Trump wrote.

Mr. Biden offered praise for the Republican leaders, saying he had “enormous respect” for their actions.

“It’s about being patriotic,” he said. “There is nothing macho about not wearing a mask.”

One of the remaining holdouts is South Dakota, which has the country’s second-worst rates of new daily cases and deaths per person.

Its Republican governor, Kristi Noem, said at a rally for President Trump last month that her refusal to issue restrictions made South Dakotans “happy because they are free.” She has yet to issue any restrictions.