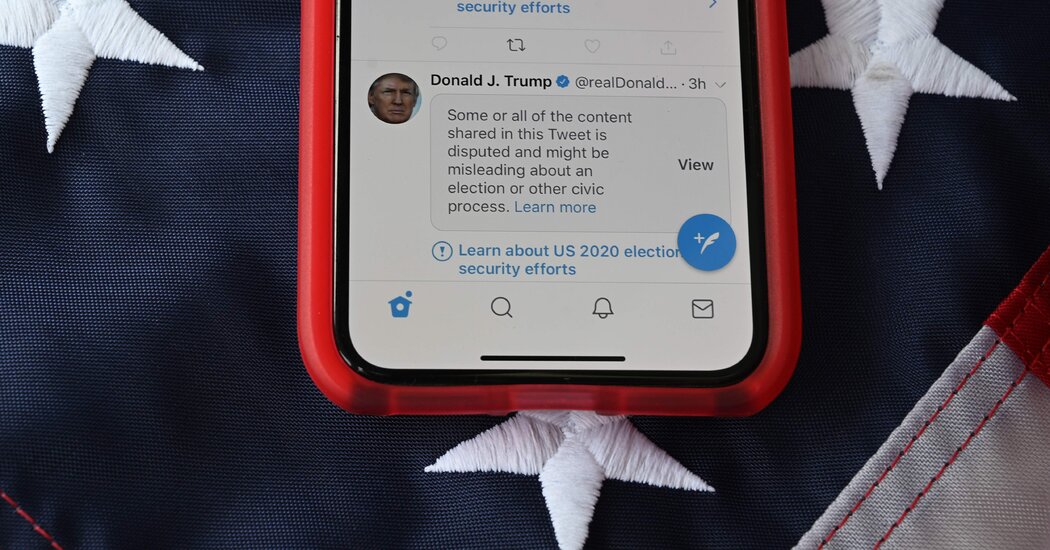 President Trump has posted over 300 tweets attacking the integrity of the 2020 election since election night, unleashing a cascade of false and misleading claims. Here’s a review.

What he was describing was simply vote counting. Election officials warned for months that counting ballots might take days or even weeks to complete, given the prevalence of absentee ballots this year. Studies and experts predicted that Mr. Trump could lead on election night in key states, but that lead could be slowly eroded as officials continued to count mail-in ballots.

The president has objected to counting votes past Election Day, claiming at least twice that late-arriving ballots are “illegal.” But 23 states and Washington, D.C., accept mail-in ballots after Election Day if they are postmarked by a certain day.

Mr. Trump has repeatedly and falsely claimed to have “won” the election or predicted that he will win after recounts in Georgia and Arizona and lawsuit verdicts.

In reality, he has virtually no chance of winning, given the large margins held by President-elect Joseph R. Biden Jr. in those states. Mr. Biden leads by 14,000 votes in Georgia and about 10,000 votes in Arizona — far more than even the largest margin to be recently overturned, several hundred votes in a 2008 Senate election in Minnesota.

Conversely, Mr. Trump has objected to news outlets and others declaring Mr. Biden the victor, asking “since when does the Lamestream Media call who our next president will be?”

A media call is not the same thing as certified results or the final Electoral College vote, but it’s worth noting that The Associated Press has called presidential elections since 1848, by combining reported vote tallies and “research including demographic data, voting history and statistics about advance voting.”

Baseless allegations of fraud and a stolen election

About two dozen of Mr. Trump’s tweets included broad allegations of “widespread voter fraud,” “illegal votes” and “a stolen election.” Election officials across the country told The New York Times that there was no evidence that irregularities affected the outcome of the election.

In a few instances, the president gave specific examples of what he suggested amounted to fraud, but those claims lacked context, were disputed or were flat-out wrong.

He claimed that military ballots in Georgia were “missing.” They were not, according to election officials in the state.

He posted a video of election officials gathering ballots and asked “is this what our Country has come to?” But the footage simply showed officials abiding by the legal process: collecting ballots from a drop box that had been locked by 8 p.m. on Election Day.

He has cited Richard Hopkins, a Postal Service worker in Erie, Pa., who claimed that ballots were backdated. But the postmaster of the facility denied that this happened, and the Postal Service’s inspector general told Congress that Mr. Hopkins disavowed his claims.

This weekend, he tweeted “10,000 dead people voted in Michigan” alleging a rigged election — though the claim had been debunked by Michigan officials and news outlets days earlier.

In over a dozen tweets, Mr. Trump has complained about poll observers being denied access to watch ballot counting. But that’s not true, according to his own legal filings. A lawyer for Mr. Trump admitted that there were “a nonzero number” of campaign observers allowed in the counting room in Philadelphia.

Georgia’s secretary of state, a Republican, noted that the state trained election officials on signature matching, required a confirmed match and created a portal that checked and confirmed voters’ drivers licenses. (Signatures are not verified again during the recount process, as ballots are separated from the signed envelopes during the initial counting process.)

Baselessly accusing a software company of malfeasance and having Chinese ties

Dominion Voting Systems has become a particular target of presidential ire. False conspiracy theories that the “glitches” in the company’s software changed vote tallies have flourished on social media.

But Mr. Trump has escalated those inaccurate claims into baseless allegations that Dominion purposefully “rigged” the election and is a “Radical Left” company. He also tweeted a seven-second video in which a Dominion executive, John Poulos, says “components in our products that come from China.”

The company, on a website debunking rumors, says that it “works with all political parties; our customer base and our government outreach practices reflect this nonpartisan approach.” Dominion operates in 28 states, including Republican strongholds such as Utah, Kansas and Tennessee as well as battleground states that Mr. Trump won, including Florida and Ohio.

The seven-second clip was taken from a January congressional hearing about election security. Mr. Poulos also said that “our tabulated products have always been manufactured in the United States.”

Pressed on which components come from China, he cited “LCD components, the actual glass screen on the interface down to the chip component level of capacitors and resistors” and noted that many of those products are not manufactured in the United States — a point previously made by Mr. Trump himself.