Blog | Alphhainc
Home Science The four astronauts are minutes from launching to orbit. 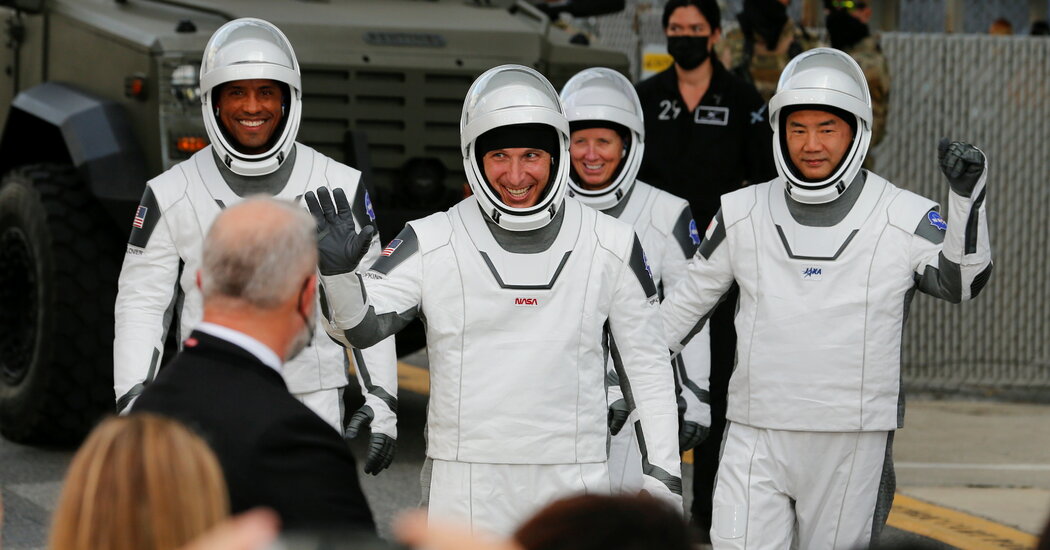 Four astronauts — three from NASA, one from JAXA, the Japanese space agency — will be sitting inside a SpaceX Crew Dragon capsule, boosted to orbit on top of a Falcon 9 rocket. The mission is known as Crew-1, and the astronauts named their capsule Resilience. They are headed to the International Space Station for a six-month stay.

A live video stream from NASA showed the astronauts in good spirits in the suit-up room where they had already put on their modern SpaceX flight suits. As numerous SpaceX technicians in black uniforms and face masks assisted them, the astronauts smiled and took photos with visitors, including Jim Bridenstine, the administrator of NASA, and Gwynne Shotwell, the president and chief operations officer of SpaceX.

Just after 4 p.m., the astronauts got into Tesla cars with license plates that said “L8RERTH.” They said goodbye to their families and began a drive to the launchpad that took about 20 minutes. Following their arrival, the four crew members boarded the capsule one at a time and began testing its systems ahead of launch.

About 90 minutes before the scheduled launch, concerns about the seal on the spacecraft’s hatch caused a brief delay, but SpaceX crews resolved the problem and returned to the timeline for the launch preparations.

This is the first of what NASA calls “operational” flights of the Crew Dragon. In May, there was a demonstration mission, with two NASA astronauts — Robert Behnken and Douglas Hurley — aboard. That launch, in a capsule named Endeavour, was the first time that a crewed mission had lifted off from the United States to orbit since the retirement of NASA’s space shuttles in 2011. Its return was also the first water landing by astronauts aboard an American spacecraft since the Apollo capsules stopped flying in the 1970s.

NASA has been relying on Russian Soyuz rockets to get its astronauts to the space station. That has become increasingly expensive, rising to a cost of more than $90 million a seat.

Patients of a Vermont Hospital Are Left ‘in the Dark’ After...