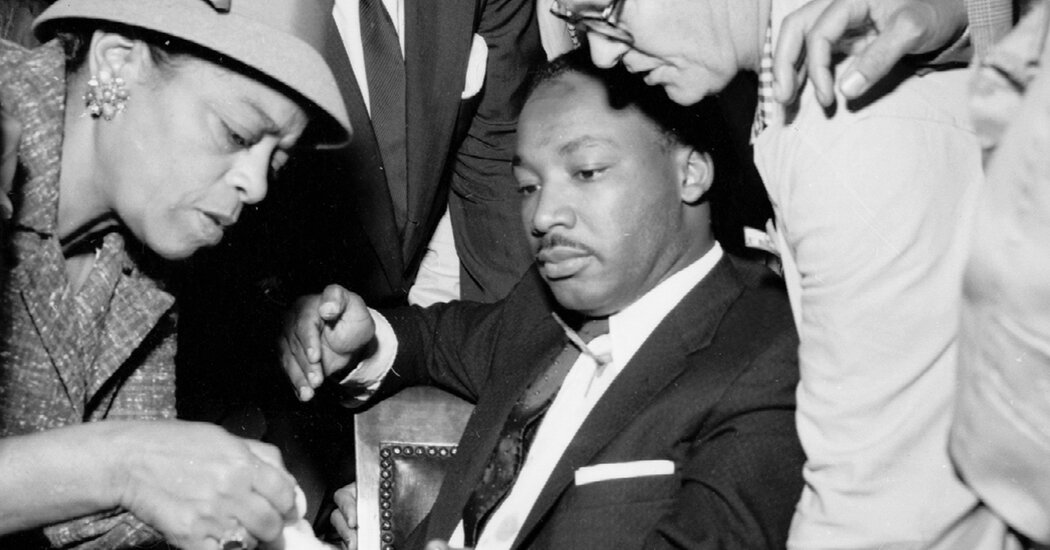 Officer Al Howard, 31 years old and on the job three years, was driving a New York Police Department patrol car with a rookie he’d just met, Officer Philip Romano. A call came over the radio: There was a disturbance at Blumstein’s department store in Harlem.

They arrived to find chaos on the second floor. At its center, in a dark suit and tie and sitting still as stone in a chair, was the Rev. Dr. Martin Luther King Jr., then 29. There was a letter opener jutting out of his chest. He had been signing copies of his book “Stride Toward Freedom,” about the Montgomery bus boycott, when a young woman approached and stabbed him.

An advertising executive for The Amsterdam News, a prominent Black newspaper, grabbed the woman and restrained her until a security officer took over. Stunned local leaders and politicians looked on as another woman, fearing for Dr. King’s life, reached to pull the blade out. The officers, knowing that the blade might have been saving Dr. King from bleeding to death, stopped her in time.

The two patrolmen hatched a fast plan, and Officer Howard turned to the crowd. The sight of a Black police officer in Harlem was no longer a novelty — the traditionally Irish-American N.Y.P.D. force would have some 1,200 Black officers by 1960 — but Officer Howard nonetheless stood out.

Officer Howard announced that Dr. King would be taken out through the front door on 125th Street and asked that a path be cleared. It worked. He stayed out front, as if waiting, while Officer Romano and others carried Dr. King to an ambulance out the back.

Officer Howard rose in the department, though not because of his actions at Blumstein’s. The earliest commendation in his personnel file arrived two months later, for arresting a man with a gun. He worked bigger cases later, helping in the hunt for the serial killer Son of Sam and with a drug squad doing extensive heroin investigations in the Bronx.

After Officer Howard retired, he took over Showman’s, a jazz club in Harlem. “If you wanted to hear the best jazz in the world, you could come to Showman’s and not pay a cover,” his son said.

The coronavirus shut down Showman’s in March. Mr. Howard stayed home and kept busy, but finally had enough of lockdown. He and Mona Lopez, his companion and partner at Showman’s, were regular visitors to Las Vegas, and they flew there in September. On the way home the following week, Mr. Howard fell ill with what appeared to be a cold but was actually Covid-19. He died several days later. He was 93.

Americans Voted in Huge Numbers. Is That the Future of Elections?