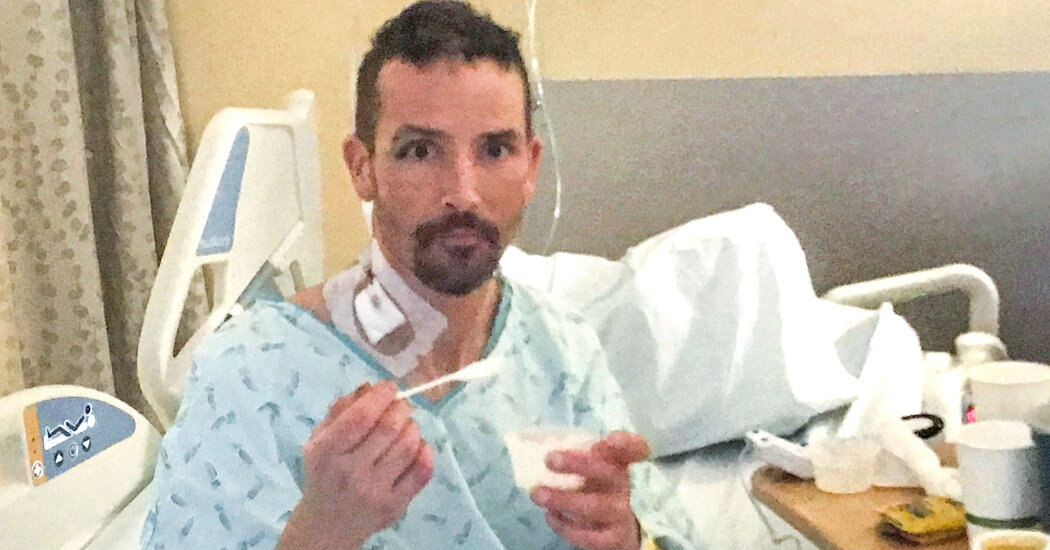 Michael Knapinski was hiking in Mount Rainier National Park last Saturday when he got lost in blinding snow and freezing conditions.

The next afternoon, after hours of fruitless searching, he was spotted by a helicopter crew and airlifted to Harborview Medical Center in Seattle. Upon arrival he was unconscious and had hypothermia, and his pulse was faint, said Nick Johnson, an emergency room doctor.

For the next 45 minutes, doctors and nurses performed CPR and hooked him up to a specialized heart-lung bypass machine that ran his blood through an oxygenator before pumping it back into his body.

“He was on the verge of death,” said Dr. Sam Arbabi, the medical director of the surgical intensive care unit at Harborview.

But two days later Mr. Knapinski was sitting up in his hospital bed, his heart and lungs functioning normally, expressing gratitude for being alive.

“He was as dead as somebody gets before they are truly dead,” Dr. Arbabi said. “For this person to come back and his mental status to be great, it is as miraculous as it gets in medicine.”

Dr. Arbabi said Mr. Knapinski had been sedated and kept at a lower temperature to protect his brain and give his other organs a chance to recover. Before he came to, doctors didn’t know if a lack of oxygen to his brain while his heart was stopped had done permanent damage. It is not uncommon, Dr. Arbabi said, for people who are resuscitated by CPR to have impaired cognitive function.

“Medical people always try to be optimistic, but we always have to think about the worst-case scenario,” Dr. Arbabi said, noting that he could see the fear in his colleagues’ eyes as they treated Mr. Knapinski.

Mr. Knapinski, 45, of Woodinville, Wash., could not be reached on Sunday. He told The Seattle Times that he had been hiking with a friend in Mount Rainier National Park on the morning of Nov. 7 when they decided to split up. They planned to meet up in an area of the park called Paradise, his friend on skis for the rest of the trek and Mr. Knapinski on snowshoes.

The weather took a turn “to whiteout conditions,” Mr. Knapinski said, adding, “I couldn’t see anything.” The last thing he remembers before losing consciousness is taking small steps down the mountain, the newspaper reported.

The life support machine that the hospital used to treat Mr. Knapinski is known as an ECMO, and it is used sparingly because it requires special training to operate, said Dr. Jenelle Badulak, an intensive care unit doctor at Harborview. It is sometimes used for coronavirus patients with lung function of less than 20 percent who are not improving with a ventilator.

The treatment, however, does not guarantee recovery. But sometimes, she said, it can save a life.

Dr. Johnson, who treated Mr. Knapinski, said that cooler temperatures had been shown to “protect the brain and improve outcomes after cardiac arrest, or when the heart stops.”

“We thought with him being cold, in addition to him being a young and fit guy who was climbing a mountain before this, he was a great candidate for this aggressive treatment,” Dr. Johnson said.

As his organs began to regain function, Mr. Knapinski was taken off the ECMO machine on Tuesday.

That night Dr. Arbabi received a page from Whitney Holen, a trauma nurse in Harborview’s intensive care unit who was caring for Mr. Knapinski. That’s usually a sign of disaster, but Ms. Holen’s voice was full of joy when she reported that “our mountain man” had opened his eyes and was smiling, he said.

About two hours after he was taken off life support, Mr. Knapinski was lying in his hospital bed, seemingly unconscious, Ms. Holen said in an interview. Before she began another round of sedation treatment, she softly said his name.

His eyes sprung open, she said, and tears began streaming down his cheeks. He wiggled his toes and gave a thumbs-up. Unable to talk because of a breathing tube, he mouthed a request to speak with his mother.

“It was very emotional,” Ms. Holen said. “We all right now are so burned out and so exhausted. To have something so dramatic happen, for someone whose heart was stopped for 45 minutes to be awake three days later — we all needed this.”

By the next morning, Mr. Knapinski’s heart was pumping normally and his kidneys showed signs that they were functioning properly, Dr. Arbabi said. Doctors removed him from a ventilator and he began to speak. His first words were to express gratitude that he was alive, Dr. Arbabi said.

On a walk with nurses around the hospital, Dr. Arbabi said, Mr. Knapinski stopped at a window, looked out at the Seattle drizzle and remarked that he had feared he would never see rain again.

Dr. Arbabi said he had written a note about Mr. Knapinski to add to a collection of “miraculous recoveries” he has witnessed.

“He is definitely lucky for all of that to have all worked out that way,” she said. “Everything in medicine has complications because we try to do these advanced things and defy death, and it’s really cool when it all works.”