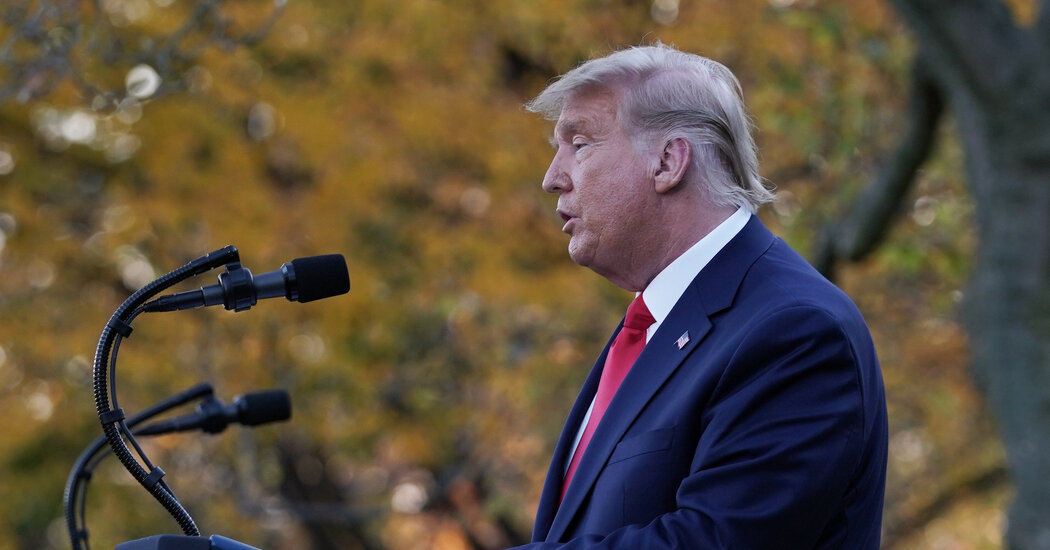 President Trump made no mention Friday of the record surge of coronavirus cases and hospitalizations as he spoke in the White House Rose Garden, where he offered a rosy assessment of the development of vaccine candidates.

Officials said that two vaccine candidates are under review for emergency use authorizations, from Pfizer and from Moderna, and that 20 million people could be vaccinated in December. The president declared that the vaccine could be available to most Americans by April, a time frame that’s seen as aspirational as opposed to definitive.

The optimistic view of the vaccine development was at odds with a near-complete ignoring of how rapidly the virus is surging. Only Vice President Mike Pence mentioned that cases are increasing. More than 163,000 new cases were announced nationwide on Thursday, yet another record, with more than 30 states reporting seven-day case records. Deaths, too, have been rising, with more than 1,000 a day on average over the last week.

Mr. Trump, by contrast, repeated a falsehood he’s uttered several times, that the reason the case numbers are so much higher in the U.S. than elsewhere is because the nation conducts more tests — a statement that ignores the rise in hospitalizations and deaths.

Dr. Moncef Slaoui, the head of Operation Warp Speed, the administration’s program to develop treatments and vaccines, said, “I think we can say significant progress has been made.”

Warp Speed focused on three types of vaccines, with two in each category, for a portfolio of six vaccine candidates. One type is based on genetic material from the virus, called messenger RNA or mRNA. The two companies using that technology, Pfizer and Moderna, are the front-runners in the race to develop a vaccine.

Mr. Trump touted a new vaccine as something that would dramatically improve the lives of Americans still suffering under restrictions to slow the spread of the virus. Senior citizens who are susceptible to the virus will be able “to reclaim their golden years,” Mr. Trump said.

He also said that under his administration, there will not be lockdowns. He then came close to saying that he hoped the next administration — meaning one led by President-elect Joseph R. Biden Jr. — won’t force nationwide restrictions, before catching himself.

“I will not go — this administration will not be going to a lockdown,” Mr. Trump said. “Hopefully the — the uh — whatever happens in the future, who knows which administration it will be, I guess time will tell.”

Mr. Trump has yet to concede the election, despite every network and The Associated Press declaring Mr. Biden the winner.

Mr. Biden blasted the federal response as inadequate in a statement Friday.

“This crisis demands a robust and immediate federal response, which has been woefully lacking,” Mr. Biden said. “I am the president-elect, but I will not be president until next year. The crisis does not respect dates on the calendar, it is accelerating right now. Urgent action is needed today, now, by the current administration — starting with an acknowledgment of how serious the current situation is.”

Pfizer reported on Monday that its vaccine, developed with the German company BioNTech, was 90 percent effective, based on early data from a large study.

Moderna said on Wednesday that it was also poised to analyze early data. Hopes are high for strong results because the two vaccines are similar.

Referring to Moderna, Dr. Slaoui said, “I would expect that shortly, probably next week, we may hear what I hope to be another very good information regarding an efficacious vaccine.” He said he expected both companies to apply to the Food and Drug Administration within the next few weeks for authorization for emergency use of their vaccines.

Mr. Trump was furious that the Pfizer announcement came after the Nov. 3 election; he had hoped to be able to point to a successful vaccine before the election in order to boost his chances.

As is often the case, Mr. Trump used the event for score-settling.

He criticized officials with Pfizer for saying that they hadn’t been part of Operation Warp Speed. Pfizer did not accept research funding, but is part of an agreement to sell doses to the federal government as part of the program.

Mr. Trump also criticized New York Gov. Andrew M. Cuomo, who said he will have independent experts verify the efficacy of any vaccine the Trump administration authorizes before it’s distributed in his state. Mr. Trump said the vaccine won’t be delivered to his former home state until Mr. Cuomo approves of it.

“It pains me to say that,” Mr. Trump said. He did not mention that leaders of other states have expressed similar concerns about vaccine delivery, such as California, Oregon, Washington State and Nevada.

An adviser to Mr. Cuomo, Rich Azzopardi, said on Twitter that it was Mr. Trump’s own fault.

“.@realDonaldTrump has failed with his pandemic response, lied to Americans about how bad it was when he knew otherwise & was fired by voters for his incompetence,” Mr. Azzopardi wrote. “@NYGovCuomo is fighting to ensure the communities hit hardest by COVID get the vaccine. Feds providing 0 resources.”

Appearing on MSNBC a short time later, Mr. Cuomo said Mr. Trump has a “credibility issue,” adding the president “uses the government as a retaliatory tool.”