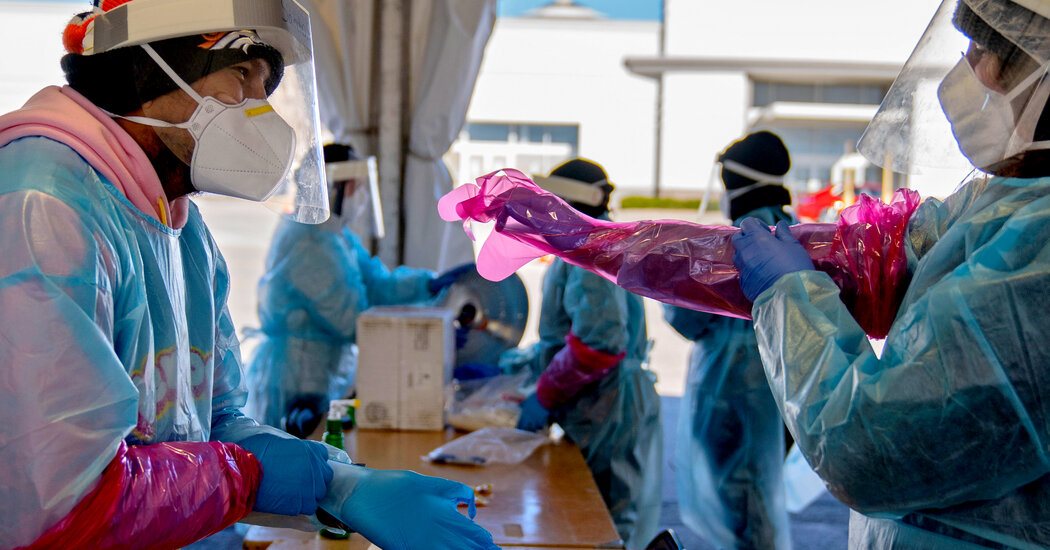 Governors and public health officials across the United States are pleading with Americans to change their behavior and prepare for a long winter as the country shatters record after record on coronavirus cases and hospitalizations.

Both records were broken yet again Friday, as more than 181,100 new cases were reported nationwide. It was only eight days earlier that the U.S. reported its first 100,000-case day. Now the seven-day average of new daily cases is more than 140,000, with upward trends in 49 states. Some 30 states added more cases in the last week than in any other seven-day period.

The virus has killed more than 1,000 Americans a day in the past week, a toll that would shock the nation, were it not for the fact that people were dying twice as fast in April, when doctors knew less about how to treat them.

More than 1,380 new deaths were reported on Friday, pushing the seven-day average to more than 1,090 a day. Wyoming reported 17 new deaths on Saturday; Oklahoma 23; Montana 36 and South Dakota 53, all single-day records.

And hospitalizations for Covid-19 also set a national record on Friday for the fourth-straight day, reaching 68,516, according to the Covid Tracking Project — a figure that has more than doubled in just five weeks.

Gov. Andrew M. Cuomo of New York tweeted: “One in every 378 Americans tested positive for COVID over the past week. Wear a mask.” Mr. Cuomo’s math is on target: In a population of 330 million, 894,819 people, or 1 in 378, tested positive since last Saturday.

North Dakota also hit a single-day record on Saturday, announcing 2,270 new cases. In a reversal, the state’s governor, Doug Burgum, announced several measures late Friday, including a mask mandate, a limit on indoor dining of 50 percent capacity or 150 people and a suspension of high school winter sports and extracurricular activities until Dec. 14. The state has critically understaffed hospitals and the highest rates of new cases and deaths per person in the nation.

In the spring, North Dakota was one of a handful of states that never entered a lockdown, and Mr. Burgum had for weeks resisted any new orders, emphasizing personal responsibility instead of requirements such as a mask mandate.

But the state’s situation has rapidly deteriorated: Over the past week, it has averaged 1,334 cases per day, an increase of 54 percent from the average two weeks earlier, and deaths are climbing fast. Hospitals are so overwhelmed that on Monday, Mr. Burgum angered the state nurses’ union by announcing that medical workers who test positive could stay on the job to treat Covid-19 patients as long as the workers show no symptoms.

In New Mexico on Friday, Gov. Michelle Lujan Grisham announced the nation’s most sweeping statewide measure of the fall season, issuing a two-week “stay at home” order to begin Monday. She asked people to shelter in place except for essential trips and said nonessential businesses and nonprofits must cease in-person activities.

Gov. Kate Brown of Oregon issued orders Friday to place the state in a partial lockdown for two weeks, shuttering gyms, halting restaurant dining and mandating that social gatherings have no more than six people. Ms. Brown, along with the governors of California and Washington, also urged residents to avoid all nonessential interstate travel in the days ahead.

Nearly half of all states have measures in place for visitors, but the measures themselves vary from mandatory testing to quarantine requirements. On Thursday, California surpassed one million cases, becoming the second state, after Texas, to do so.

The latest wave of cases is washing over nearly every part of the United States, unlike the spring, when it was concentrated in the New York metropolitan area. More than 30 states, from Alaska to New Hampshire, have set records in recent days.

The outlook is especially dire in the Great Lakes region. Pennsylvania, Indiana and Minnesota all exceeded their previous single-day records on Thursday by more than 1,000 cases. Gov. Mike DeWine of Ohio warned that hospitalizations had soared to record levels. Wisconsin surpassed 300,000 known cases this week, an increase of more than 130,000 in just a month.

“Covid-19 is everywhere in our state,” said Julie Willems Van Dijk, the deputy secretary of the Wisconsin Department of Health Services. “It is bad everywhere, and it is getting worse everywhere.”

In Illinois, where more than 75,000 cases have emerged in the last, Gov. J.B. Pritzker suggested that he could soon impose a stay-at-home order, and he scolded local officials for not enforcing mask rules and restrictions on businesses.

And in New York City, an early hot spot now facing a possible second wave, the mayor warned on Friday that public schools could close as early as Monday if the seven-day average positivity rate surpasses 3 percent. Private residential gatherings must be limited to 10 people beginning at 10 p.m.

New York’s governor, Andrew M. Cuomo, said he believed that the situation is going to “continue to deteriorate in the coming weeks,” and that he was planning an emergency meeting with his counterparts in six northeastern states.

Dr. Anthony S. Fauci, the nation’s top infectious disease expert, appeared on “CBS This Morning” on Friday to repeat his pleas to Americans to take the virus seriously.

“If we do the things that are simple public health measures, that soaring will level and start to come down,” he said. “You add that to the help of a vaccine, we can turn this around. It is not futile.”