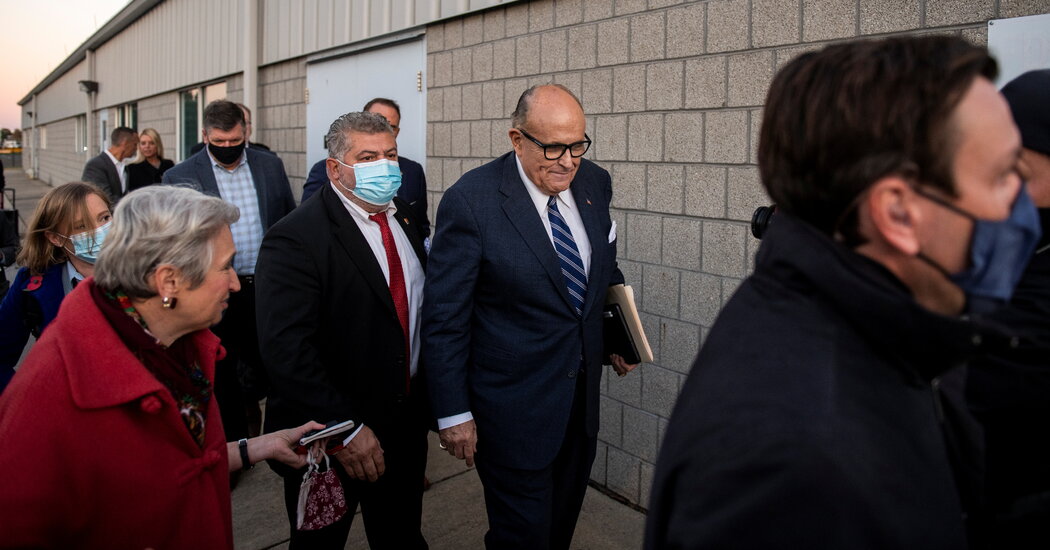 Rudolph W. Giuliani, the president’s personal lawyer, continued on Saturday his effort to delegitimize votes cast through electronic voting machines, citing several conspiracies connected to the companies that make the machines and the software they run in a post on Twitter.

Looking to sow doubt about the vote count in multiple swing states that were recently called for President-elect Joseph R. Biden Jr., Mr. Giuliani hinted support for a discredited theory that one of the companies that manufactures the voting machines used in some states, Smartmatic, is controlled by the billionaire philanthropist George Soros.

“Look up SMARTMATIC and tweet me what you think?” Mr. Giuliani wrote. “It will all come out.”

Hours later, President Trump picked up a similar refrain, stating in a tweet that the election was “stolen” by “privately owned Radical Left company, Dominion,” without providing evidence or explaining why Dominion was distinct among the many other privately owned election system vendors that routinely administer elections in the United States.

Speculation that Mr. Soros has any influence over Smartmatic or its operations has been thoroughly debunked, and he does not own the company. Mr. Soros’s distant connection to the company is through his association with Smartmatic’s chairman, Mark Malloch-Brown, who is on the board of Mr. Soros’s Open Society Foundation.

Smartmatic has been used in elections around the world. In Venezuela’s election, the software was manipulated to report a skewed tally. But the company said that it was an anomaly and cited the lack of election monitors as part of the problem. In the United States, monitors from both parties are allowed to watch vote counting.

In the tweet, Mr. Giuliani appeared to backtrack on an earlier claim that Dominion Voting Systems, which makes the secure software used by voting machines, was involved in changing tallies, claiming that the company was in fact a “front” for Smartmatic, which he claimed was really doing the computing. Mr. Giuliani had previously said he was in contact with “whistle-blowers” from Dominion, and he claimed, despite overwhelming evidence to the contrary, that the company had altered vote tallies in battleground states that had elected Mr. Biden such as Michigan and Georgia.

On Friday, Dominion pushed back against related claims, citing a joint statement by the Department of Homeland Security stating that there was “no evidence that any voting system deleted or lost votes, changed votes, or was in any way compromised.”

On Thursday, a group of federal, state and local officials working with the department said the election was “the most secure in American history.”