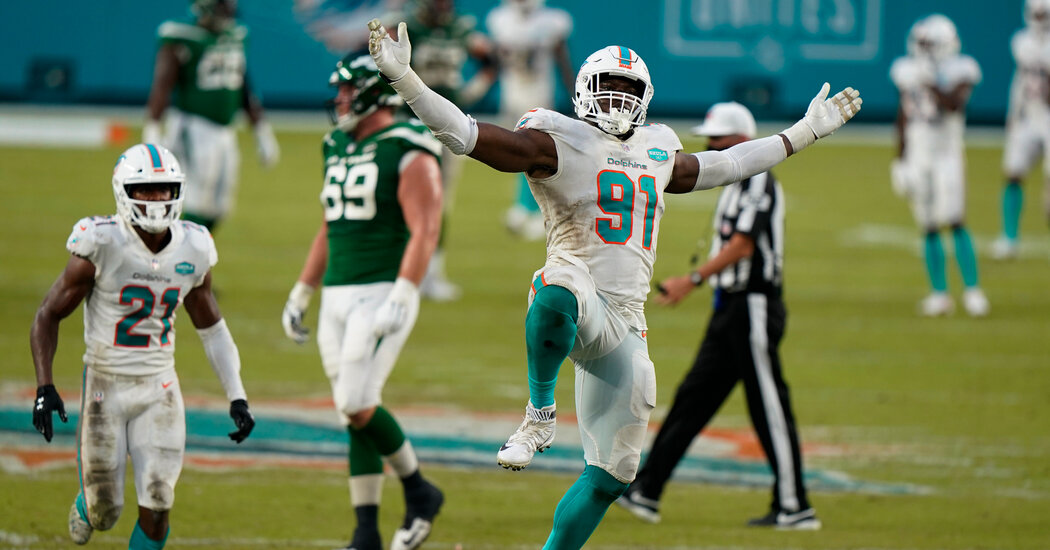 MIAMI GARDENS, Fla.— Ryan Fitzpatrick threw three touchdown passes and the Miami Dolphins held the Jets without a third-down conversion until the fourth quarter on Sunday to get their first shutout in six years, 24-0.

The game was so lopsided that Tua Tagovailoa, Miami’s rookie quarterback, made his N.F.L. debut with two minutes and 27 seconds left. The Dolphins’ potential franchise quarterback ran onto the field to a big roar from the crowd of 10,772, and a grinning Fitzpatrick waved to encourage more cheers.

The Dolphins (3-3) reached .500 for the first time under second-year Coach Brian Flores and moved into second place in the A.F.C. East behind the Buffalo Bills. The Jets (0-6) are now the N.F.L.’s only remaining winless team and continued their worst start since 1996, increasing the heat on Coach Adam Gase.

The Dolphins blanked the Jets for the first time since their 14-0 win in the A.F.C. championship game after the 1982 season.

The two teams were a combined 0 for 19 on third downs before the Jets finally converted with 11 minutes left. The Dolphins’ only third-down conversion came on a completion by Tagovailoa, who went 2 for 2 for 9 yards.

Fitzpatrick was 18 for 27 for 191 yards and two interceptions for Miami. He also blocked for Myles Gaskins on a run and improvised a left-handed completion under pressure for a short gain.

Joe Flacco, who made his second consecutive start for the injured Sam Darnold, went 21 for 44 for 186 yards and an interception. He was sacked three times, once for 28 yards.

The Jets, who released running back Le’Veon Bell on Tuesday, had 115 yards rushing.

The Dolphins built a 21-0 lead in the first half. Fitzpatrick threw three short touchdown passes each from inside the 5-yard line. Adam Shaheen, Preston Williams and Durham Smythe each caught a touchdown pass.

Xavien Howard’s second-quarter interception of Flacco was his fourth of the season, and gives him an interception in four straight games, the second-longest streak in Dolphins history. Dick Westmoreland had a five-game streak in 1967.

Dolphins kicker Jason Sanders is now 15 for 15 on field goal tries, a franchise record to start a season. Jets kicker Sam Ficken had made all nine of his field-goal attempts and his six extra-point attempts coming into the game, but missed a 55-yarder in the third quarter.

The Dolphins have a bye next week, while the Jets will host Buffalo on Sunday. The Bills won, 27-17, when the teams met in Week 1.