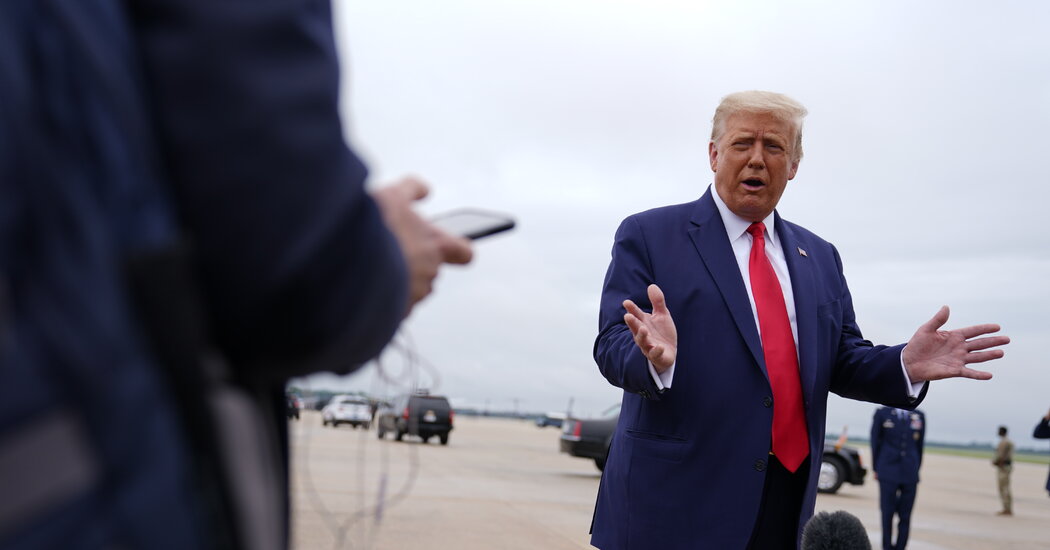 When President Trump makes his appearance on Thursday night on NBC News, he is expected to speak, probably maskless, with the moderator, Savannah Guthrie, and the audience sitting at least 12 feet away. But he is unlikely to transmit the coronavirus to any of those people, multiple experts said.

Since Mr. Trump first announced his diagnosis this month, questions about his infectiousness have swirled because it is still unclear exactly when and how he became ill or how severe his symptoms have been.

“From a safety standpoint, and a public health standpoint, I think it’s probably fine, although we don’t have all the information that I would like to have in order to make that call,” said Dr. Rochelle Walensky, an infectious disease physician at Massachusetts General Hospital in Boston.

Mr. Trump announced his positive test in the early hours of Oct. 2, and was given several powerful treatments in rapid succession, including monoclonal antibodies to give his immune system a boost and a steroid that prevents dangerous inflammation.

The Centers for Disease Control and Prevention recommends that infected patients isolate for at least 10 days if they had mild or moderate illness, and for up to 20 days if they had severe symptoms. The steroid Mr. Trump received, dexamethasone, can also prolong the duration of infectiousness.

But without information about Mr. Trump’s oxygen levels or scans of his lungs, it’s impossible to know how severe his illness has been, doctors said.

The chief White House physician, Dr. Sean P. Conley, has sometimes provided cryptic reports on the president’s recovery. On Monday Dr. Conley said that Mr. Trump had tested negative multiple times on the Abbott BinaxNOW test, which is not intended to confirm the absence of the virus. The doctor also alluded to other results not provided by any commercial test.

But on Tuesday, at the insistence of NBC News, the White House provided Mr. Trump’s result from a P.C.R. test — the gold standard lab diagnostic for the coronavirus — to Dr. Anthony S. Fauci, the country’s top infectious disease expert, and Dr. Clifford Lane, a clinical director at the National Institutes of Health.

After reviewing the data, they cleared Mr. Trump to attend the town hall event. “We feel confident that we can say with a high degree of confidence that he is not transmissible,” Dr. Fauci said in an interview on Wednesday.

Trump Tried to Blur Responsibility for His Family Separation Policy in...