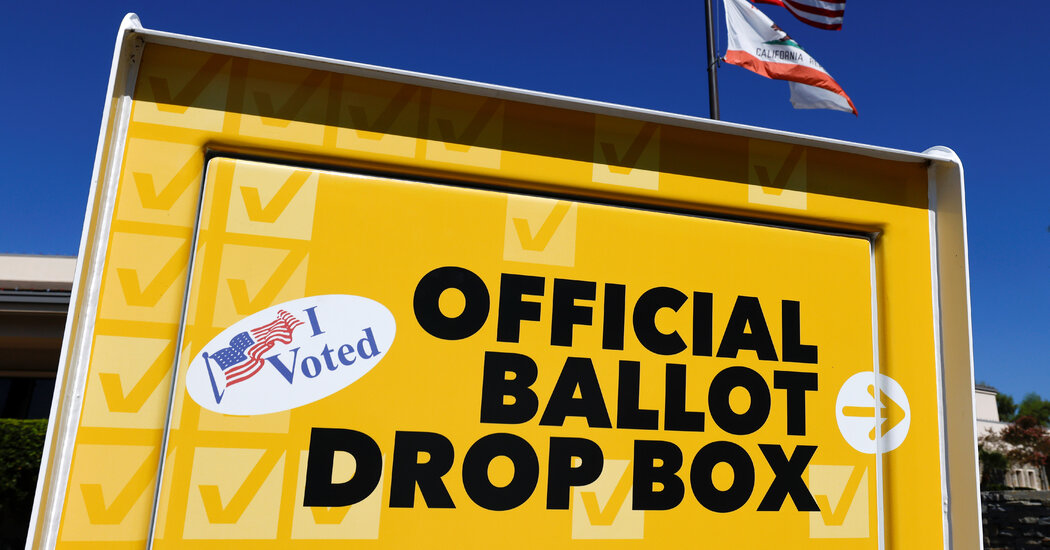 In a recent Instagram video, Whoopi Goldberg fills out her New York State mail-in ballot, joining other celebrity early voters like Zoë Kravitz, Elle Fanning, Joe Jonas, Tracee Ellis Ross and Lily Collins, all of whom recently posted images of their own ballots or “I voted” stickers on social media.

Ms. Goldberg’s completed ballot is blurred out in the video; were it not, she could be guilty of committing a misdemeanor.

In New York, as in a number of other states, showing your ballot after “it is prepared for voting” or asking someone to show theirs is against the law.

This year might see a higher streak of violations than usual, given the number of people expected to vote by absentee ballot from home, where taking out a phone and snapping a quick photo is much easier than in a booth at one’s polling place.

The New York law, which goes back to the late 19th century, was upheld in court in 2017, when a judge ruled that it protects against fraud and prevents delays at the polls.

“This law was designed to prevent vote-selling and voter coercion,” said Leo Glickman, the lawyer who argued that the law violates the right to freedom of speech protected by the First Amendment. “The evil it was trying to address was a union boss or employer following workers into a polling place and making them show who they voted for.”

Today, secrecy in the voting booth is sacrosanct. But for a long time, voting in the U.S. was done publicly, a practice driven in part by the belief that transparency would force accountability.

During the colonial era, people expressed their support for candidates with their voices or with ball-shaped items, like pebbles. Later, voters arrived at the polls with their own ballots, which they cut out from newspapers or scribbled on paper. Casting a ballot was a competitive and sometimes violent endeavor, and was accompanied at times by public bribery, according to the historian Jill Lepore.

In the late 1800s, the Australian ballot arrived on U.S. shores, and state by state, election rules were changed: Ballots had to be printed by the government, and booths or rooms needed to be provided for privacy.

Then, as now, each state made its own rules of conduct around voting. Today, taking a “ballot selfie” is fine in more than half the country, but illegal in states like South Carolina, Texas and Nevada.

In some places, the laws can be confusing. Voters in Colorado, for example, have been able to take and share photos of their ballots since 2017. But they cannot do so at a polling location, a spokeswoman for the Colorado Department of State said.

“A lot of our election laws in New Jersey were written at the turn of the last century, at a time when there was a lot of voter fraud going on,” said Micah Rasmussen, the director of the Rebovich Institute for New Jersey Politics at Rider University. “They were really concerned with preserving the secrecy of the vote. That carried into this provision from 2005 of not letting people see how you’re voting.” In New Jersey, posting a photo of your ballot is a criminal offense.

States like New Hampshire and California have changed their ballot selfie laws in recent years, so celebrities in the Los Angeles area can post away.

“Sharing a ballot selfie is a magnificent display of civic participation,” said Marc Levine, the member of the California State Assembly who led the charge on amending the law in 2016.

“Before, based on the law, you couldn’t even show your ballot to a family member,” said Mr. Levine, who said he sometimes uses an image of his marked ballot for the 2020 presidential election as his Zoom background. “It’s clearly unconstitutional. The First Amendment protects political speech. That includes a digital image of one’s marked ballot.”

Mr. Rasmussen hopes that this year’s election will force New Jersey legislators to reconsider the law prohibiting photos of marked ballots. But for now, he recommends that voters err on the safe side.

“Show yourself with your sealed envelope, dropping it into the box,” he said. “You’re not doing anything to interfere with the secrecy of the vote by doing it that way.”

Cathay Pacific slashes 8,500 jobs as it struggles with the pandemic...