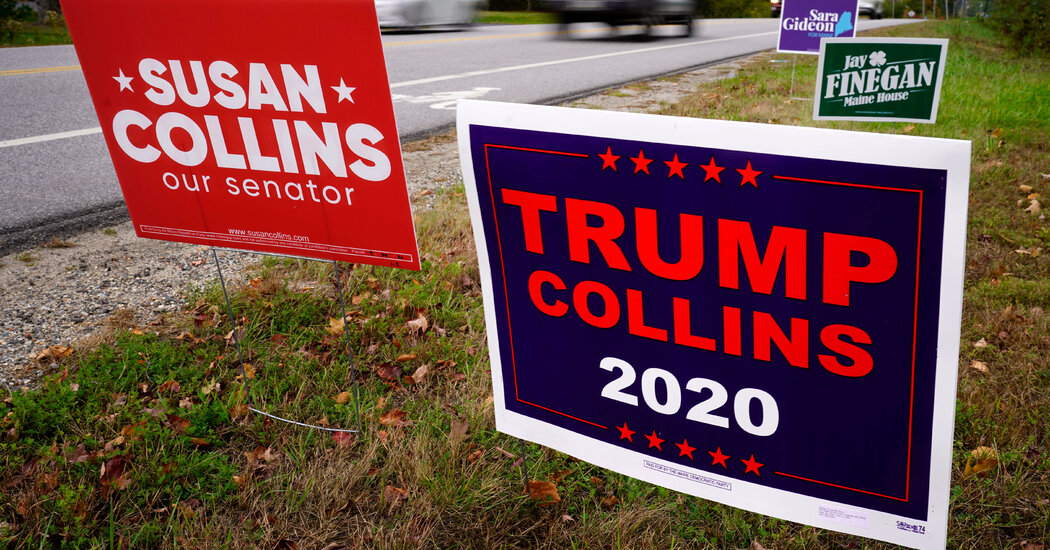 President Trump lashed out at the Republican senator Susan Collins of Maine on Friday for not supporting the confirmation of Judge Amy Coney Barrett to the Supreme Court, adding that given their previous policy disagreements, winning her over was “not worth the work!”

It was an unusual attack: Ms. Collins has often sought to distance herself from the president and preserve her reputation as someone who is willing to break with her party, but she is locked in a tight re-election race that is one of the main reasons Republicans fear they may lose control of the Senate.

Mr. Trump’s tweet described “a nasty rumor out there” that Ms. Collins would not support Judge Barrett’s nomination. It is no rumor. On Thursday night, at a contentious debate with her Democratic challenger, Sara Gideon, Ms. Collins reiterated she would indeed not vote to confirm Judge Barrett because Republicans had blockaded Merrick Garland, President Barack Obama’s appointee, in 2016.

“It’s clearly not a political calculation since it does not make a lot of people happy,” Ms. Collins said. “It’s a matter of principle, it’s a matter of fairness. In a democracy, we should play by the same rules and the fact is that there has not been a confirmation of a Supreme Court justice in a presidential election year since 1932.”

Mr. Trump does not actually need Ms. Collins’s vote to confirm Judge Barrett: Enough members of the Republican Senate majority have said they would support her that her confirmation appears all but certain.

Mr. Trump also criticized Ms. Collins in his tweet for not supporting “Healthcare,” a likely reference to her joining Democrats to block the Republican effort to repeal the Affordable Care Act in 2017.

He made no mention, however, of her support for his two previous nominations to the Supreme Court, Justices Neil Gorsuch and Brett Kavanaugh, the latter of which has cost her politically. Her vote for Justice Kavanaugh has galvanized liberal voters in Maine and across the country to flood the race with donations to Ms. Gideon.

Several polls have found Ms. Collins, the last New England Republican, narrowly trailing Ms. Gideon, who chipped away at Ms. Collins’s reputation as a moderate Republican and tie her squarely with the national party.

Ms. Gideon, who does not support adding justices to the Supreme Court or imposing term limits, said she would support returning a 60-vote threshold, known as the filibuster, for judicial nominees as a way to ensure an independent judiciary. (Both parties have chipped away at the filibuster for nominations as a way to overcome partisan opposition.)

“I think we should go back to having a filibuster in place for judicial nominees,” she said.