Blog | Alphhainc
Home US Trump Thought He Had a Nuclear Deal With Putin. Not So Fast,... 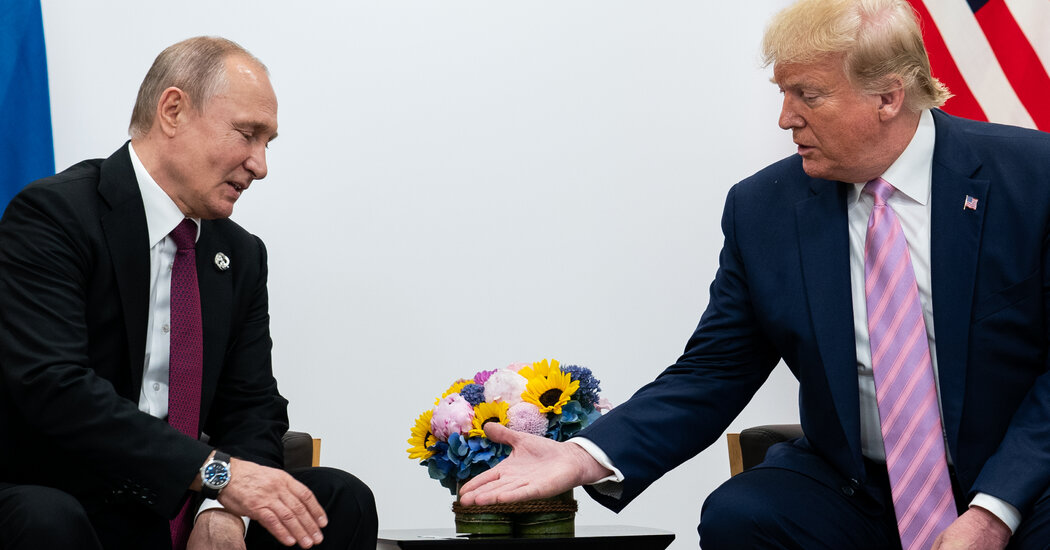 President Trump had a pre-election plan to show he had gotten something out of his mysteriously friendly relationship with President Vladimir V. Putin of Russia.

In the weeks before the election, the two men would announce that they had reached an agreement in principle to extend New START, the last remaining major arms control agreement between the two countries. It expires on Feb. 5, two weeks after the next presidential inauguration.

Mr. Trump has long refused to sign off on a clean five-year extension of the agreement, a step both leaders could take without Senate approval. He has described the Obama-era treaty as deeply flawed — the same thing he said about the North American Free Trade Agreement and the Iran nuclear accord — because it did not cover all of Russia’s nuclear arms, or any of China’s.

But if Mr. Putin is really rooting for Mr. Trump to be re-elected, he is not acting like it.

On Tuesday, Marshall Billingslea, Mr. Trump’s lead negotiator, announced that the two leaders had an “agreement in principle, at the highest levels of our two governments, to extend the treaty.” Mr. Billingslea described an added “gentleman’s agreement” to cap each country’s stockpile of weapons not currently deployed on missiles, submarines or bombers. Details needed to be worked out, he cautioned, including the tricky work of verifying compliance.

It sounded like a promising solution, for a few hours.

Then the Russian deputy foreign minister, Sergei A. Ryabkov, shot back that this was a figment of someone’s election-season imagination. “Washington is describing what is desired, not what is real,” he said in a statement. For example, he said, Moscow would not freeze the number of tactical weapons it possesses.

With less than three weeks to Election Day, it seems no agreement is in the offing, and Trump administration officials are saying that, after the election, the price will go up. Former Vice President Joseph R. Biden Jr., the Democratic nominee who was involved in the negotiation of the original agreement in 2010, has indicated that, if elected, he will agree to a straightforward, immediate extension of the accord for five years, the maximum allowed under the current terms, and then work to expand its scope.

As a result, Mr. Putin, looking at the polls, may be calculating that there is no reason to agree to any additional limits. But it also suggests that despite the C.I.A.’s conclusion that the Russian leader has a preference for Mr. Trump, Mr. Putin may also be hedging his bets — or betting that Mr. Trump will be a private citizen by the time the treaty runs out.

On Wednesday, Secretary of State Mike Pompeo tried to put the best face on the Russian rejection. “I am hopeful that the Russians will find a way to agree to an outcome that, frankly, I think is in their best interest,” he said at a news conference at the State Department.

But Russia’s foreign minister, Sergey V. Lavrov, joined the Kremlin’s dismissal of prospects for an agreement before the election, saying the Trump administration’s one-sided announcement of a nuclear limitation deal was an “unclean” diplomatic maneuver.

The Russian pushback echoed across the government. The Kremlin’s spokesman, Dmitri S. Peskov, said the “position of the Russian side is well known and consistent. And for now, we can’t speak of any concrete agreements.” Then the Russian Information Agency, a state news outlet, ran an article saying the Russian foreign ministry “called the American announcement of a New START agreement with Russia nonsense and a setup.”

It was not the first time Mr. Putin, who worked so hard on Mr. Trump’s behalf in 2016, has shown possible signs of backing away from the president.

Earlier this month, he hinted in an interview with state television at an effort to reach out to Democrats. While his goals were unclear, and with American officials cautioning that Russian disinformation may be at work, Mr. Putin spoke warmly of the Democratic Party and suggested that he could work with Mr. Biden on arms control.

Analysts in Russia saw in the rejection of a pre-election nuclear deal the Kremlin preparing the ground in case Mr. Trump loses. “As the chances of a Trump re-election are increasingly remote,” Pavel Felgenhauer, a military commentator for the independent Novaya Gazeta newspaper, said in a telephone interview, “why should we bend over backward?”

Mr. Putin’s position all year has been that the New START agreement, which limits both countries to 1,550 deployed nuclear weapons, should be extended for five years. But there are no limits on stockpiled weapons, which are essentially in storage. And that is why fears of a resumed arms race have arisen, as the United States and Russia move to improve their arsenals with new, more sophisticated weapons.

Mr. Putin has taken pride in developing new weapons, some of which have apparently run into trouble in testing, leading to a major accident in the summer of 2019. The current New START treaty does not limit such work — or put limits on tactical weapons.

Mr. Trump has pulled out of a series of arms control treaties, including the 1987 Intermediate-Range Nuclear Forces Treaty, widely known as the I.N.F. And now Russia has no incentive to negotiate on tactical warheads, which it has preserved and expanded in recent decades while the U.S. abolished most of its arsenal, save for small numbers stored around Europe.

“Russia has an advantage in tactical weapons,” Mr. Felgenhauer said. “It doesn’t make any sense for Russia to negotiate.”

There is little question that Russia had been cheating on the I.N.F. treaty’s limits, and placing medium-range missiles, which appear to be armed with the tactical weapons, on its borders with Europe. The Obama administration considered abandoning the I.N.F., before deciding against it. Mr. Trump went ahead, arguing that the treaty’s restrictions were keeping Washington from countering on similar weaponry that China was deploying in the Pacific.

China was not a party to either New START or the I.N.F., and Mr. Trump has argued that the treaties need to be updated to account for Beijing’s arms buildup. But the Chinese counter that they have around 300 nuclear weapons deployed — a fifth of the number Russia and the United States are limited to under the treaty — and that they would have no interest in any restrictions. Some Chinese officials, somewhat facetiously, have suggested that Mr. Trump’s initiative could lead them to quintuple their arsenal and then enter into arms control talks.

On Beijing entering into nuclear arms talks, Mr. Pompeo expressed hopes on Wednesday “that the Chinese Communist Party will come to see that this is how mature nations deal with these issues,” but he acknowledged that Chinese leaders have “refused to join the conversation.”

Mr. Biden’s advisers say nothing is wrong with the idea of bringing China into arms control agreements. But they have said that abandoning New START in a failing effort to accomplish that goal would only destroy the last remaining significant limits on deployed nuclear weapons.

If Mr. Biden wins, it is possible Russia could get what it wants, a straightforward extension before the February expiration, in a quick deal immediately after a Biden inauguration.