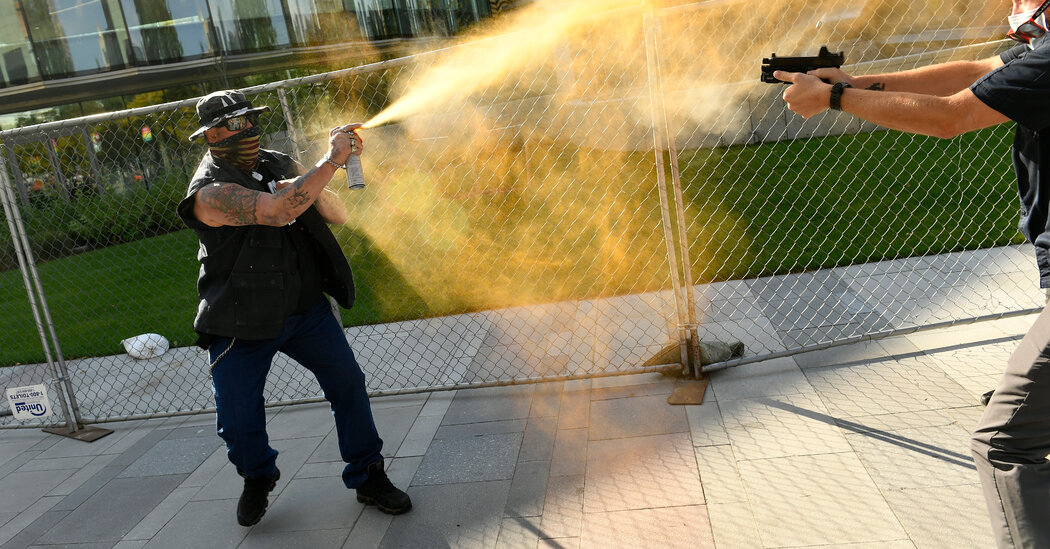 DENVER — The harrowing set of photos taken by a Denver Post photographer of a fatal shooting after street protests on Saturday did not make the newspaper’s front page the next day.

The photographer, Helen H. Richardson, wasn’t dawdling. After capturing the shooting frame by frame, she spent three hours at police headquarters being questioned as a witness.

“It’s 4 o’clock, and I have a deadline,” she recalled telling the police.

Ms. Richardson described how she came to take the photographs in a phone interview on Monday. She was near Civic Center Park in Denver on Saturday afternoon covering a far-right “Patriot Muster” rally while a far-left counterprotest took place nearby. After people started to disperse, she was at the southern end of the park, near the Denver Art Museum, when an argument broke out.

“I don’t really know what compelled me to walk that way,” Ms. Richardson said.

The fatal shooting that followed left a man who attended the rally dead. A private security guard, hired by a television news station, was in police custody. And the news photographer found herself in the middle of a first-degree murder investigation.

One of the men in the argument, Lee Keltner, abruptly disengaged from that altercation, she said, and confronted the private guard, Matthew Dolloff, who had not been involved in the argument. Moments later, he slapped Mr. Dolloff, she said.

Ms. Richardson said that the events unfolded in seconds and that Mr. Dolloff had come from behind her. Instinctively, she kept capturing the episode, “knowing to calm down, to focus, to keep shooting,” she said.

After slapping Mr. Dolloff, Mr. Keltner sprayed a Mace-like substance at him, “it seemed like simultaneously,” Ms. Richardson said, as Mr. Dolloff pulled out a firearm and opened fire.

“There was never a thought, Am I going to run?” she said. “I didn’t have enough time to, really.”

In the photo of Mr. Keltner lying on the ground, Mr. Dolloff, his head turned hard to his left, appears to look directly at Ms. Richardson’s camera.

“In that moment it felt like it was only me and him,” she said. “Is he going to start spraying bullets into the crowd?” she recalled thinking. “I had no bulletproof vest, nothing.”

“I felt this sense of, I am open; I am really vulnerable,” she said. “And then it was over.”

Mr. Keltner, 49, who owned a custom hat shop in the Denver area, died after being taken to a hospital, the police said on Saturday.

Mr. Dolloff, 30, had not yet been charged on Monday, a police spokeswoman said, and his lawyer did not immediately respond to a request for comment. Any charges would occur at a hearing within 72 hours of his first advisement — an initial court appearance under Colorado state law — which was on Sunday, said H. Michael Steinberg, a defense lawyer in the Denver area who is not representing Mr. Dolloff.

Ms. Richardson is one of five staff photographers at The Denver Post, which has been gutted by layoffs after a hedge fund bought the paper in 2011. She photographs a variety of subjects, like sports, wildfires and other breaking news. The rally on Saturday is one of only a few protests she has photographed in 2020 because she was furloughed earlier in the year, she said.

The photos on Saturday “just happened,” she said. “I just shot at the right time.”

Ms. Richardson’s photo of Mr. Keltner spraying Mr. Dolloff was a “moment of everything coming together in one frame,” she said, adding that it is difficult in fast-moving situations to situate the camera in focus and with the correct exposure.