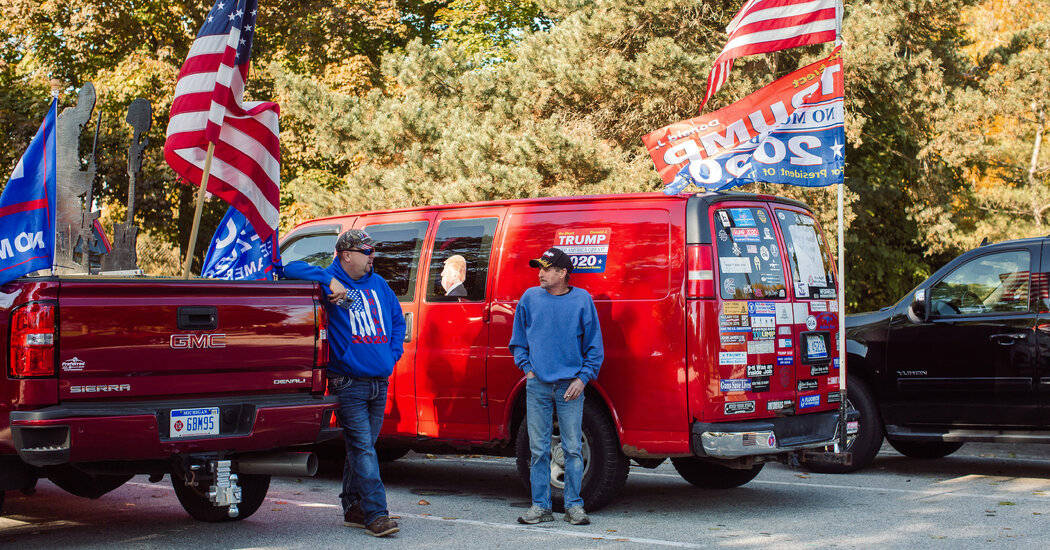 With just over three weeks left until Election Day, hundreds of supporters of President Trump took to Michigan’s highways on Sunday afternoon for a loud and visible display of devotion to their candidate.

It was similar to the Trump boat parades that took over waterways this summer, only on wheels. Festooning their cars with Trump banners and American flags, cardboard cutouts of the president and hand-painted slogans, hundreds of people gathered at rest stops along I-75 and U.S.-31, the main freeways that run north and south along the eastern and western sides of the state. At noon, with horns honking, all headed north, driving for an hour or more as they passed people heading home from fall foliage tours.

“The American people have two choices: Either vote socialism, or you vote for capitalism,” said Vern Mueller, 77, of Reese, who worked in the agriculture industry and met up with more than 60 cars at a Bay County rest stop. “Trump is a capitalist. That’s the way America should be. That’s how it was founded.”

The Trump campaign has reveled in public displays of support from boat parades and road rallies in Michigan and other states since the coronavirus took hold of the country in March. The president regularly tweets glowingly about the flotillas, and his son Donald Trump Jr. even invited boaters to join him in a parade off the Hamptons on Long Island in August.

It’s a way for the president’s fans to rally for re-election without having to worry about social distancing.

“We’re all ready to get out and bust out, and we can do whatever we want in our cars, right?” said Debra Ell, 64, of Frankenmuth, an organizer of the rally who also helped sign people up to work the polls on Election Day.

Not everyone was a fan, Krystie Linton, 44, a special-education teacher from Ann Arbor who supports Joseph R. Biden Jr., looked on with a mix of horror and curiosity at a Trump group at a rest stop who had arrived in cars and trucks covered in pro-Trump symbols and set up tables with Trump merchandise.

“I just don’t get it,” Ms. Linton said on her way home from a fall weekend up north. “Trump has brought out the worst in America. It’s a scary place for our country to be.”

“We thought about where we can have the biggest impact,” Ms. Ell said. “You have to have an equal number of Republicans and Democrats, and we think the city of Flint needs the help most.”

Both Republicans and Democrats have recruited workers to watch polling places and the sites where absentee votes are counted. Under state law, paid workers at the polls must be evenly split between Republicans and Democrats. But there have been complaints over the years from elections officials in urban areas, who have said that volunteers at the polls have tried to intimidate voters as they wait in line to vote.