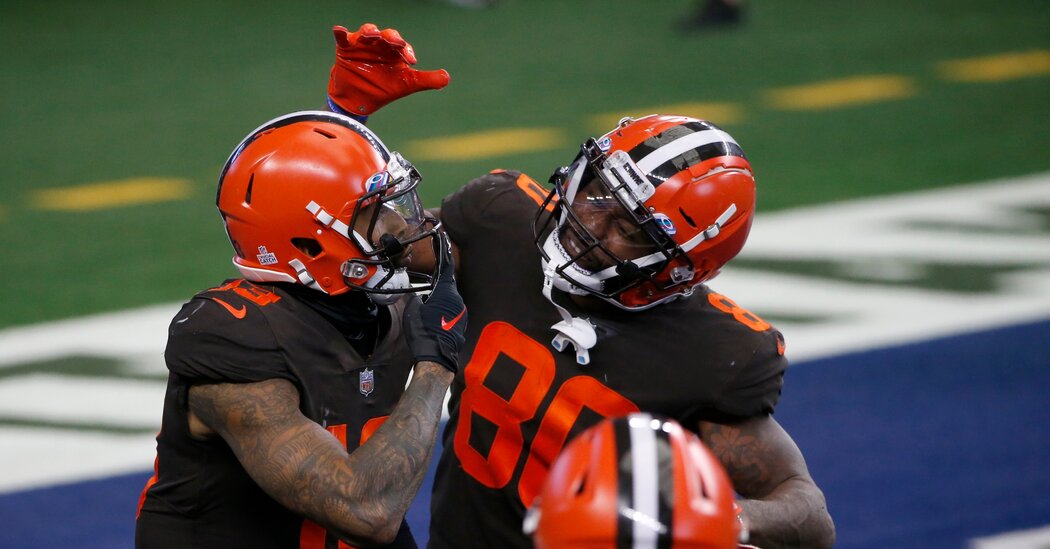 This N.F.L. season is coming to be defined by numbers of all sorts. Positive Covid-19 tests around the league are forcing league execs to slide around games from week-to-week, changing the traditional lineup to odd hours.

Case(s) in point: the Tuesday night (7 p.m. Eastern) clash between the 4-0 Buffalo Bills and 3-0 Tennessee Titans was rescheduled from this Sunday after more positive cases were found among the Titans. And a game between the New England Patriots and the Denver Broncos was delayed from Sunday to Monday, and then was pushed off indefinitely.

Around the league, as Bill Pennington writes, “Through four weeks of the 2020 season, the average combined score of a game is 51.3 points, an increase of 16 percent over the same period a year ago and a roughly 20 percent increase in the average score of games since 2000.”

Oddsmakers expect Sunday’s late game between the Minnesota Vikings and Seattle Seahawks to be the day’s barnburner. But before then, a handful of teams will see if they can get the number 1 in the win column, as the Falcons (0-4) face the Panthers at home, Dak Prescott and the Cowboys (0-4) get the Giants in Dallas, and the Texans (0-4) greet the Jaguars in Houston.

Broncos-Patriots has been delayed indefinitely.

The N.F.L. has indefinitely postponed Monday’s game between the Denver Broncos and the New England Patriots, the latest reshuffling of the league’s schedule to accommodate the rash of positive tests for the coronavirus.

The league had already pushed back the game from Sunday to Monday after Stephon Gilmore, the team’s star defensive back, tested positive. The team returned to practice Saturday, but another presumptive positive test Sunday forced the league to act before the Broncos left Denver for Foxborough, Mass.

The league has not said when or if the game will be made up. Because this week will now serve as the bye week for both teams, there are no other openings on their schedule unless other games are moved, or the league adds an additional week to the season for makeup games. The Patriots were originally scheduled for a bye in Week 6, and the Broncos had a bye in Week 8. Read the full story here.

Proving that an 0-1 start isn’t so bad, the Colts and the Browns have both followed up their opening-week disappointment with three consecutive wins, each of which came in convincing fashion. Indianapolis is powered by its defense and running game — and quarterback Philip Rivers is fitting in well as he climbs the career touchdown list — while Cleveland has finally found its offensive mojo, with Baker Mayfield, Odell Beckham Jr. and the rest of the team clicking in the way everyone thought they would last season.

So what happens when the Colts’ defense tries to slow down the Browns’ offense? The answer might give a solid indication of which of these teams is a real contender and which one is just beating up on lesser competition.

Complicating matters for Indianapolis is linebacker Darius Leonard being questionable with a groin injury. He wasn’t able to practice on Wednesday or Thursday, and if he were to miss the game that would open up the middle of the field for the Browns.