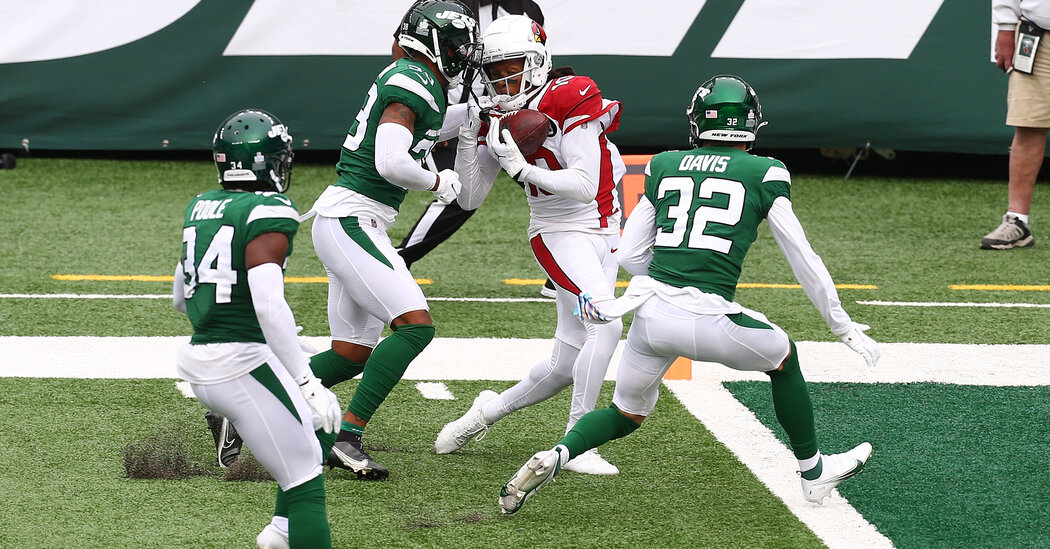 EAST RUTHERFORD, N.J. (AP) — The Arizona Cardinals came to MetLife Stadium and, like every other team this season, found a remedy for their woes with a game against a winless team from New York’s rotten football apple.

Quarterback Kyler Murray ran for a touchdown and threw another to DeAndre Hopkins as the Cardinals stopped a two-game losing streak with a 30-10 victory over the Jets, further putting Coach Adam Gase’s future in jeopardy after the Jets fell to 0-5.

Murray had a 2-yard touchdown run and hit Hopkins on a 37-yard strike as part of the Cardinals’ (3-2) 496 total yards of offense. Chase Edmonds scored on 29-yard run, Kenyan Drake scored from a yard out and Zane Gonzalez kicked a 47-yard field goal. Arizona scored touchdowns on drives of 96, 89, 75 and 70 yards.

With quarterback Joe Flacco starting in place of the injured Sam Darnold and running back Le’Veon Bell back in the lineup for the first time since opening day, the Jets stayed close into the second half. They drew within 17-10 on an 11-yard pass from Flacco to Jamison Crowder, who had eight catches for 116 yards.

The Cardinals quickly put the game out of reach, scoring touchdowns on their next two possessions. Drake powered his way into the end zone with 15 seconds left in the third quarter. Murray (27 of 37 for 380 yards) capped a six-play, 96-yard drive with a toss to Hopkins, who had six catches for 136 yards.

This marks the third straight year Darnold has missed games with injuries or an illness. He missed three games as a rookie in 2018 with a foot injury and three games last season with mononucleosis.

Besides Darnold, the Jets had three other starters out this week: receiver Breshad Perriman (ankle), offensive lineman Mekhi Becton (shoulder) and cornerback Bless Austin (calf). Jets receiver Chris Hogan was carted of in the fourth quarter with an injury.

The Cardinals will finish a three-game road trip at Dallas on Sunday. While the Jets will play at Miami next Sunday as N.F.L. reorganizes it schedule amid the coronavirus pandemic.

Donald Trump Jr. said virus deaths had fallen to ‘almost nothing’ as over 1,000 died in the U.S.

Trump will finish with a two-day, 10-event dash ending in Grand Rapids, the site of his last 2016 rally.

Do Dunkin’ and Arby’s Go Together? Private Equity Group Bets $11...