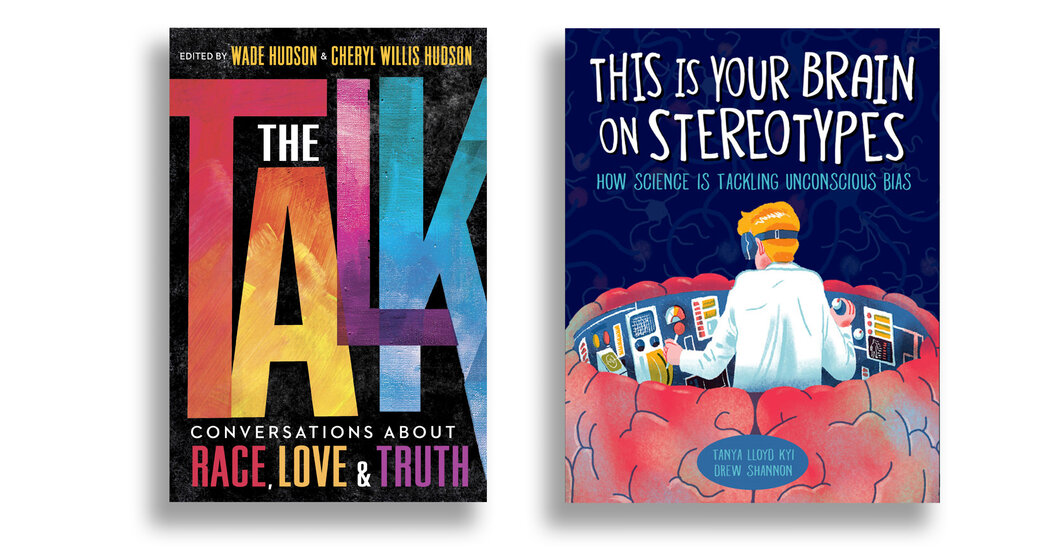 The essays, stories, poems and letters commissioned by Wade Hudson and Cheryl Willis Hudson for “The Talk” focus on preparing children for a world that can be bewildering and hostile. Written before 2020 began its assault, they only gain relevance as we close in on a heated presidential election. They also make plain that the hard conversations we all need to have about race are part of a broad reckoning with our nation’s history.

The book’s black-and-white images project love and support. In Nikki Grimes’s poem “Tough Tuesday,” an encounter with a hateful adult sends a girl “into the blanket / of my mother’s arms,” which Erin K. Robinson’s illustration shows are as soothing and empowering as the mother’s words. April Harrison’s illustration for “Ten” matches the urgent calm of Tracey Baptiste’s traffic-stop story, in which the narrator tells her child 10 rules to follow.

Other pieces note the interconnectedness of our past, present and future. Derrick Barnes’s “Handle Your Business” features an 8-year-old who responds to his classmates’ and teacher’s insensitivity by educating them about his ancestors. Meg Medina’s “Hablar” finds a parent pressing her child to speak Spanish despite hearing “This is America! Speak our language!” from strangers: “It is what binds you … to all the hard journeys that were made to get us here.” Adam Gidwitz’s “Our Inheritance” imagines the conversation he will have with his daughter when she’s 10 about working to change the unfair systems from which they themselves have benefited.

The author and illustrator Christopher Myers concludes the book with “Mazes,” linking current injustices to an ancient story. His Minotaur narrator laments how many benign entities have been treated as mortal threats: “foreign hordes, creeping perils, hidden dangers, all of them, all of us, some sort of monster in their hero factory.”

By contrast, “This Is Your Brain on Stereotypes,” written, illustrated and published by Canadians, seems almost alien in its upbeat perspective. With amiable authority, Tanya Lloyd Kyi explains how natural it is for humans to “sort and label the world around us,” and what dire consequences can occur when we put people into categories that weaken their social standing, as witnessed by the horrors of Nazi Germany. Alongside Drew Shannon’s colorful illustrations, she encapsulates key sociological and scientific research on racism and stereotyping. She touches on bias-related problems like the underrepresentation of women in STEM fields, disparities in medical care and high rates of police shootings of unarmed Black men.

American readers may wish for more discussion of these issues in the context of systemic bias, but Kyi gravitates toward concrete examples of positive change. In Winnipeg, Manitoba, for instance, new emergency-room procedures were instituted following the death of an Indigenous man who wasn’t examined because staff assumed he was drunk or homeless.

Her tips for individual action are similarly practical, but worlds apart from the challenges Americans face as biases spread viruslike through the populace.

Europe’s virus numbers look like they did in the spring: high and getting higher.