Blog | Alphhainc
Home US House Democrats propose a commission to determine whether the president is fit... 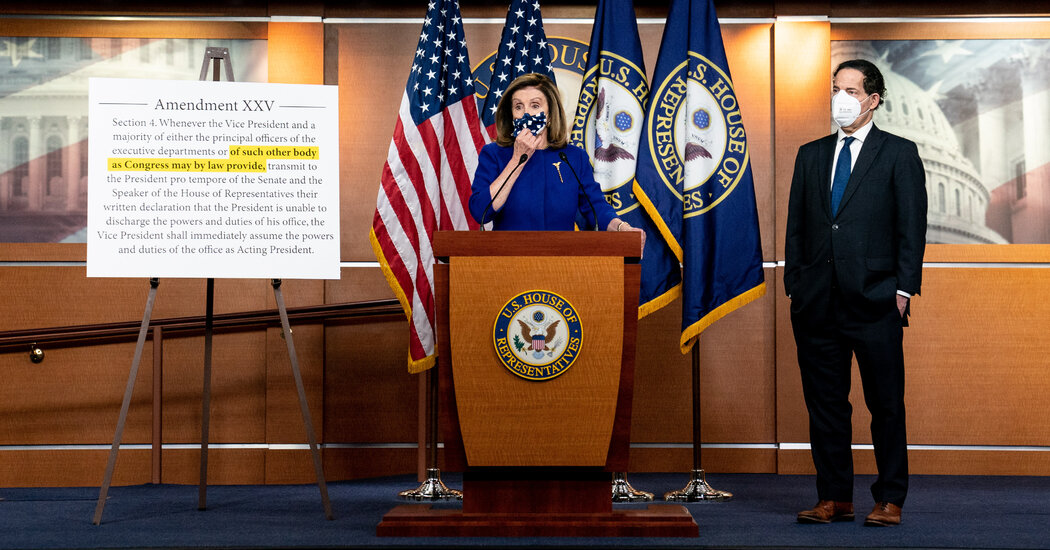 Speaker Nancy Pelosi, elevating questions about President Trump’s fitness to govern, introduced legislation Friday morning that would create a bipartisan group of outside experts to evaluate his mental and physical health and advise Congress whether his powers should be forcibly removed under the 25th Amendment.

The measure has no chance of enactment under Mr. Trump, whose signature would be needed to make it law. A version was introduced before the president was hospitalized with the coronavirus, but in publicly presenting it now, Ms. Pelosi, who has suggested that drugs the president has received to treat the virus may have affected his mental state, is moving to call attention to the issue.

“A president’s fitness for office must be determined by science and facts,” Ms. Pelosi said. “This legislation applies to future presidents, but we are reminded of the necessity of action by the health of the current president.”

The president has raged against the idea, calling Ms. Pelosi “Crazy Nancy” and accusing her of staging a coup. Kayleigh McEnany, the White House press secretary, called the measure “an absurd proposition” on Friday and countered that Ms. Pelosi was “projecting.”

“The only one who needs to be looking at the 25th Amendment is Nancy Pelosi herself,” Ms. McEnany said on “Fox & Friends.” (The 25th Amendment only applies to presidents, not members of Congress.)

The measure, introduced by Representative Jamie Raskin, Democrat of Maryland, would create an 11-member commission of health experts, doctors and former senior executive branch officials, such as a former president, to report to Congress on the president’s competence. Top Democratic and Republican leaders of the House and Senate would each select members.

Republicans have blasted the legislation as an attempt to overturn the results of the November election.

“Right here in this last three weeks before the election, I think those kinds of wild comments should be largely discounted,” Senator Mitch McConnell of Kentucky, the majority leader, said on Friday.