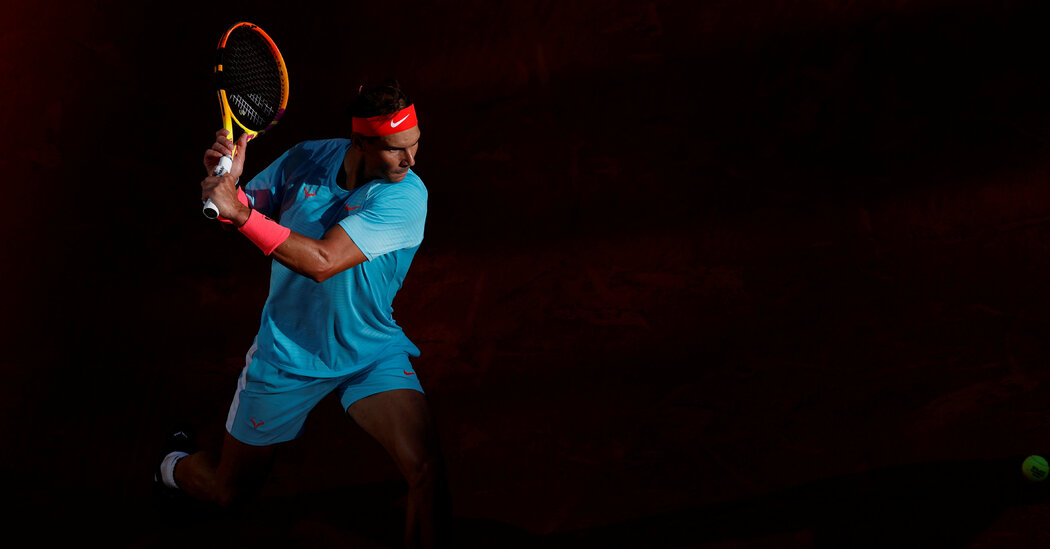 Was the Italian Open really only last month? It seemed much more distant on Friday as Rafael Nadal inexorably imposed his skill and will during his French Open semifinal with Diego Schwartzman.

Schwartzman, a big talent in a small package, beat Nadal on clay in Rome in September, regularly breaking his serve and catching him off guard with drop-shot winners in the Italian Open quarterfinals.

But defeating Nadal at Roland Garros, even under unusual circumstances during the coronavirus pandemic, remains one of the great challenges in sports.

“Rafa is a legend here, but I know I can beat him,” Schwartzman said before the rematch.

In truth, he did not even come close as Nadal rumbled to a 6-3, 6-3, 7-6 (0) victory in three hours and nine minutes that put him into yet another French Open final.

“In Rome I didn’t play my best and he played, I think, well,” Nadal said. “Of course we took a look at that match, and the things that didn’t work and the things we needed to change. Tried to make that happen, and today it worked, so I’m really happy for that.”

He will be aiming for a 13th men’s singles title at Roland Garros: a preposterous figure at any tournament, much less a Grand Slam event.

He should be in for a challenge as he faces the winner of Friday’s second semifinal between No. 1 seed Novak Djokovic and No. 5 seed Stefanos Tsitsipas, both of whom have also beaten Nadal on clay. Nadal, if he prevails in the final, will have won 100 matches at the French Open.

But for once, the focus will not be on Nadal’s running total at Roland Garros. It will be on his attempt to tie Roger Federer’s men’s record of 20 Grand Slam singles titles.

Federer, 39, has not played since February because of two knee surgeries and does not plan to return to competition until 2021. Federer won his 20th major title at the 2018 Australian Open but Nadal has steadily narrowed the gap since then as he won the French Open twice more and the United States Open in 2019 to bring his total to 19.

Nadal, true to character, has downplayed the chase.

When pressed, he has acknowledged that he is not immune to the lure of the history books. But he has always been more interested in looking forward to the next point, the next match, the next challenge than looking back at all the castles he has built on the clay and elsewhere.

It is his not-so-secret weapon — that deep focus on process over destination. Complacency is not an option, as Schwartzman surely knew before he took to the Philippe Chatrier Court on Friday afternoon.

It was cool at 61 degrees yet clear, a fine day for tennis with, for a change, no need to close the new roof. Nadal has complained about the conditions in this autumnal edition of the French Open, moved from its usual dates in May and June because of the pandemic.

He finished his quarterfinal victory over Jannik Sinner past 1 a.m. on Wednesday in heavy conditions that were cold enough for his support team to be wearing parkas in the stands.

But there was not much to complain about for Nadal on Friday: not the weather and not his own level of play.

He is now 13-0 in French Open semifinals.

His only two losses here at any stage came in the fourth round in 2009 to Robin Soderling and in the quarterfinals in 2015 to Djokovic. Otherwise, Nadal has been irresistible, and at age 34, he has done all he can to maximize his chances this year.

Though he was the reigning champion at the U.S. Open, he decided not to play in New York this year and remained at home in Majorca, Spain, where he trained on clay at his eponymous academy. He believed that making the trip to the United States would risk wearing him down for the abbreviated clay-court season, with the French Open coming just two weeks after the men’s U.S. Open final.

So far, so smart, but he is on new ground here. He has never won the French Open without winning a clay-court tournament in the lead-up and no one has ever won a French Open in October. His forehand is not bouncing as high in the cool conditions. His serve is not traveling as quickly: down, on average, four miles per hour from 2019.

But despite all of the above, he has yet to drop a set in the tournament.

After fighting through a 14-minute opening game on Friday to hold serve, he worked his way through the grinding first set, full of double-digit rallies and all-court hustle.

He made adjustments after the loss to Schwartzman in Rome: moving in closer on first-serve returns and much closer on second-serve returns. It paid off with break after break, and though Schwartzman tried drop shots, they were not as consistently successful.

The match tightened in the third set, however, as Nadal failed twice to hold serve after going up a break. At 5-5, he held serve after saving three break points, saving the last of those by serving and volleying for the first time in the match.

Greatness is in the details, and Nadal is, contrary to popular image, a great tactician as well as a great athlete, ball striker and competitor.

He went on to win the third-set tiebreaker, too, and is now just one victory away from ruling again at Roland Garros.

How Georgia, once reliably Republican, has become an improbable battleground.