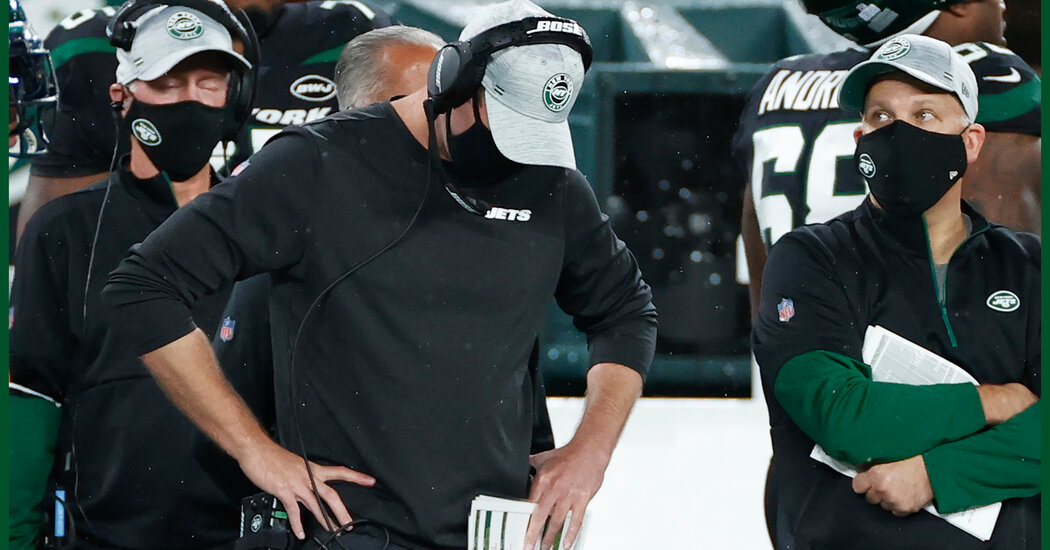 The Jets confirmed Friday that one of their players had tested positive for the coronavirus, and that all players had been sent home from the team’s facility as a precaution.

The positive result throws into question whether the Jets will be able to play their next game, at home against the Arizona Cardinals on Sunday, and is the latest problem for the N.F.L. already scrambling to adjust for outbreaks on two other teams.

The Jets are the latest N.F.L. team to have a player test positive, deepening the challenge the league faces as it tries to complete a full schedule of games. On Thursday, the league was forced to postpone two other games, the latest in a series of cascading readjustments to its complicated matrix of a schedule in the wake of virus outbreaks involving the Tennessee Titans and the New England Patriots.

The league announced that the Titans — who have had the league’s worst outbreak, with nearly two dozen players, coaches and staff members testing positive — would play the Buffalo Bills on Tuesday at 7 p.m. Eastern time, instead of on Sunday. But even that plan was contingent on the team’s not reporting any new positives. The Titans reported two additional positive tests in their organization on Thursday.

If Tennessee and Buffalo play on Tuesday, the Bills’ next game, against the Kansas City Chiefs, would be moved back three days from Thursday, Oct. 15.

The league had already postponed the Titans’ game against the Pittsburgh Steelers, scheduled for this past Sunday, by three weeks because of the Titans’ outbreak.

The league also on Thursday moved the Patriots-Denver Broncos game, scheduled for Sunday, to 5 p.m. Eastern on Monday, after Stefon Gilmore, New England’s star cornerback, was reported to have tested positive.

Last week, the Patriots’ Sunday game was moved to Monday because the team’s quarterback, Cam Newton, had tested positive.

At the same time, the league is moving to tighten its oversight of teams, and threatening to punish organizations that do not abide by the protocols. The N.F.L. said it would use video surveillance to ensure that players and coaches were wearing proper protective equipment at team facilities, and it is investigating whether the Titans violated league rules by working out after the club’s facility was shuttered because of the outbreak in the locker room.

If the team is found to be in violation, it could face penalties, including fines and the loss of draft picks. Tennessee could even be forced to forfeit a game.

Unlike the N.B.A., the W.N.B.A. and several other leagues, the N.F.L. — which had much bigger rosters and coaching staffs than most leagues — chose not to resume its season in a restricted environment like the so-called bubbles used in basketball.

Instead, protocols were put in place to enforce physical distancing and other safety measures while the players and the team’s staff members were together. But at the end of each day, all team personnel are allowed to return home, increasing their chances of being exposed to the virus.

Swimming to Sanity in Melbourne’s Lockdown