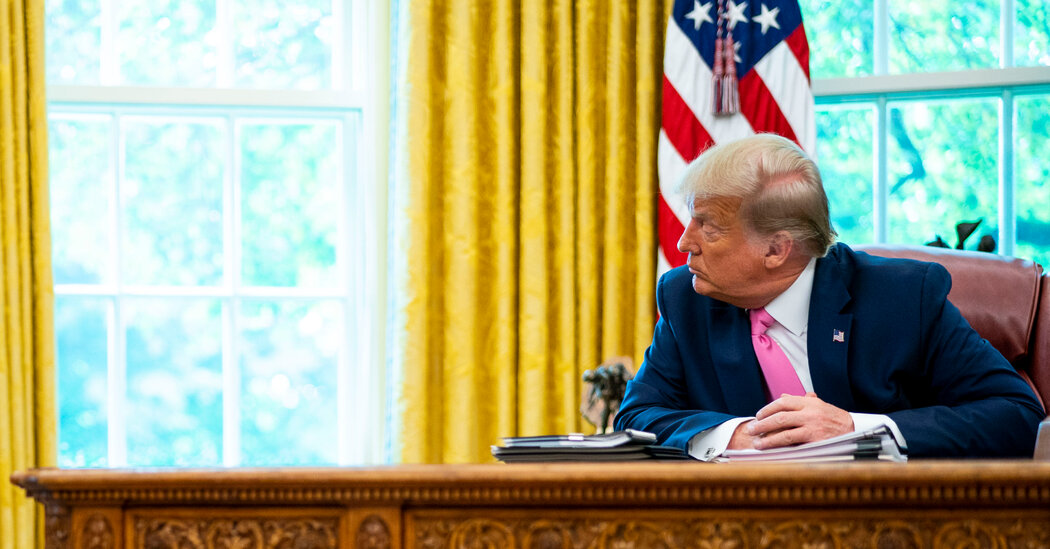 For several years, it has been the stuff of his opponents’ nightmares: that President Trump, facing the prospect of defeat in the 2020 election, would declare by presidential edict that the vote had been delayed or canceled.

Never mind that no president has that power, that the timing of federal elections has been fixed since the 19th century and that the Constitution sets an immovable expiration date on the president’s term. Given Mr. Trump’s contempt for the legal limits on his office and his oft-expressed admiration for foreign dictators, it hardly seemed far-fetched to imagine he would at least attempt the gambit.

But when the moment came on Thursday, with Mr. Trump suggesting for the first time that the election could be delayed, his proposal appeared as impotent as it was predictable — less a stunning assertion of his authority than yet another lament that his political prospects have dimmed amid a global public-health crisis. Indeed, his comments on Twitter came shortly after the Commerce Department reported that American economic output contracted last quarter at the fastest rate in recorded history, underscoring one of Mr. Trump’s most severe vulnerabilities as he pursues a second term.

Far from a strongman, Mr. Trump has lately become a heckler in his own government, promoting medical conspiracy theories on social media, playing no constructive role in either the management of the coronavirus pandemic or the negotiation of an economic rescue plan in Congress — and complaining endlessly about the unfairness of it all.

“It will be a great embarrassment to the USA,” Mr. Trump tweeted of the election, asserting without evidence that mail-in voting would lead to fraud. “Delay the Election until people can properly, securely and safely vote???”

The most powerful leaders in Congress immediately shot down the idea of moving the election, including the top figures in Mr. Trump’s own party.

“Never in the history of the country, through wars, depressions, and the Civil War have we ever not had a federally scheduled election on time, and we’ll find a way to do that again this Nov. 3,” Mitch McConnell, the Senate Majority Leader, said in an interview with WNKY television in Kentucky. “We’ll cope with whatever the situation is and have the election on Nov. 3 as already scheduled.”

Mr. Trump’s tweet about delaying the election put a self-pitying exclamation mark on a phase of his presidency defined not by the accumulation of executive power, but by an abdication of presidential leadership on a national emergency.

Faced with the kind of economic wreckage besieging millions of Americans, any other president would be shoulder-deep in the process of marshaling his top lieutenants and leaders in Congress to form a robust government response. Instead, Mr. Trump has been absent this week from economic-relief talks, even as a crucial unemployment benefit is poised to expire and the Federal Reserve chairman, Jerome H. Powell, warned publicly that the country’s recovery is lagging.

And any other president confronted with a virulent viral outbreak across huge regions of the country would be at least trying to deliver a clear and consistent message about public safety. Instead, Mr. Trump has continued to promote a drug of no proven efficacy, hydroxychloroquine, as a potential miracle cure, and to demand that schools and businesses reopen quickly — even as he has also claimed that it might be impossible to hold a safe election.

William F. Weld, the former governor of Massachusetts who mounted a largely symbolic challenge to Mr. Trump in the Republican primaries this year, said on Thursday that the president’s tweet was a sign that Mr. Trump was panicked and unmoored. Though Mr. Weld has argued for years that Mr. Trump had dictatorial impulses, he said Thursday that the election-delay idea was “not a legitimate threat.”

“So many dead and the economy in free fall — and what’s his reaction? Delay the election,” Mr. Weld said. “It’s a sign of a mind that’s having a great deal of difficulty coming to terms with reality.”

Mr. Trump has attacked the legitimacy of American elections before, including the one in 2016 that made him president. Even after winning the Electoral College that year, Mr. Trump cast doubt on the popular vote and postulated baselessly that Hillary Clinton’s substantial lead in that metric had been tainted by illegal voting.

With that as precedent, there has never been much doubt — certainly among his opponents — that Mr. Trump would attempt to undercut the election if it appeared likely he would lose it. While Mr. Trump does not have the power to shift the date of the election, there is ample concern among Democrats that his appointees in Washington or his allies in state governments could make a large-scale effort to snarl the process of voting.

Given the extreme nature of Mr. Trump’s suggestion, there was an odd familiarity to the response it garnered from political leaders in both parties. There was no immediate call to the barricades, or renewed push from Democrats for presidential impeachment. Opposition leaders expressed outrage, but most agreed, in public and private, that Mr. Trump’s outburst should be treated as a distress call rather than a real statement of his governing intentions.

House Speaker Nancy Pelosi, the most powerful Democrat in government, replied to Mr. Trump’s tweet simply by posting on Twitter the language from the Constitution stating that Congress, not the president, sets the date of national elections. Representative Zoe Lofgren of California, a Democrat who chairs the congressional committee that oversees elections, suggested in no uncertain terms that Mr. Trump’s tweet was another symptom of his inability to master the coronavirus.

“Only Congress can change the date of our elections,” Ms. Lofgren said, “and under no circumstances will we consider doing so to accommodate the President’s inept and haphazard response to the coronavirus pandemic, or give credence to the lies and misinformation he spreads regarding the manner in which Americans can safely and securely cast their ballots.”

Republicans, who typically answer the president with a combination of evasion or no comment, did not rush to become profiles in courage by thundering against an out-of-control presidency, and some ducked the issue entirely when confronted by reporters. But many others were blunt in their rejection of Mr. Trump’s position.

“Make no mistake: the election will happen in New Hampshire on November 3rd. End of story,” Gov. Chris Sununu of New Hampshire, a Republican who is up for re-election, said on Twitter.

Senator Marco Rubio of Florida said on Capitol Hill, “Since 1845, we’ve had an election on the first Tuesday after November first and we’re going to have one again this year.”

Representative Kevin McCarthy, the House minority leader and one of Mr. Trump’s staunchest allies in Congress, echoed that position, saying “we should go forward.”

Others were more equivocal, following a well-worn Republican playbook for avoiding direct conflict with the president over his wilder pronouncements. Secretary of State Mike Pompeo, asked in a Senate hearing whether he believed it was legal for a president to delay an election, said he was “not going to enter a legal judgment on that on the fly this morning.” That would be an assessment, he said, for the Justice Department.

Even Mr. Trump’s campaign declined to turn his tweet into a rallying cry, instead playing down the notion that it might have been a policy prescription. Hogan Gidley, a spokesman for the campaign, said Mr. Trump was “just raising a question about the chaos Democrats have created with their insistence on all mail-in voting” — an obviously false paraphrase of the president’s tweet, one that minimized the gravity of what Mr. Trump had said.

The timing of Mr. Trump’s tweet, as much as the content, highlighted the extent to which he has become a loud but isolated figure in government, and in the public life of the country. In addition to failing to devise a credible national response to the coronavirus pandemic, he has made no attempt to play the traditional presidential role of calming the country in moments of fear and soothing it in moments of grief.

Never was that more apparent than on Thursday, when Mr. Trump spent the morning posting a combination of incendiary and pedestrian tweets, while his three immediate predecessors — Barack Obama, George W. Bush and Bill Clinton — gathered in Atlanta for the funeral of John Lewis, the congressman and civil rights hero.

As mourners assembled at the Ebenezer Baptist Church, Mr. Trump had other matters on his mind, like hypothetical election fraud and, as it happened, Italian food.